As part of the prize for winning the 2014 Guild Of Motoring Writers Sir William Lyons Award, Stephen Kilbey was handed the opportunity to experience and write about one of the most prestigious events in all of motorsport: the Mille Miglia. He’ll be spending the remainder of the week driving round Italy as part of Jaguar’s XE drive team, and documenting his experiences each day on DSC:

Stepping out of his D-Type looking like he’d swept a chimney, and with a sizeable grin, Team Jaguar’s Simon Kidston represented the sportsmanship and camaraderie of the Mille Miglia. “We’re not racing drivers,” he said referring to himself and his teammate Jason Barlow outside a small café on the outskirts of Pisa. “We’ve already stopped for a two-hour lunch, for ice cream, and now coffee. We’re not in this to win, but we’ll be food critics by the end of this.”

With the first half of the Mille over, the second full-on day saw the runners travel north again pointing in the direction of Brescia – the end goal. It meant driving the good part of 300 miles from Rome to Parma, and while initially it seemed like it would be a calmer day than the run down to the Captiial, as is the norm, I underestimated it. The drive through the Lazio region as a whole is very much characterised by the changes in terrain, more so than the other routes. With each passing day our convoy of Jaguar XEs becomes more and more adventurous, sticking closer together when possible and actually overtaking some of the slower historic cars that were finding the event particularly taxing. Police bikes were actively encouraging us to step the pace up even more at points, so naturally we listened to the law enforcers and continued to drive ‘to the conditions of the event’! 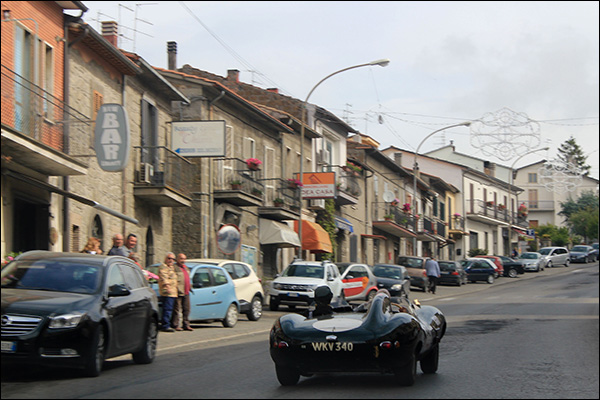 Siena was our first main attraction, but before then we had to tackle some of the smaller villages close by, and drive on a Regulatory Stage for the first time. Regulatory Stages are far less congested, more challenging in terms of undulation and worth more points than the stages which only award for higher average speeds. There were some eye-opening moments climbing hills; being overtaken and doing some overtaking of our own round some tight blind bends. Nevertheless, it was more of an exhilarating segment of the day rather than a fear evoking one. As the pace of the Mille route began to decrease again, we hit a tiny village called Buonconevnto for a five minute period which I’ll never forget. It was packed to the rafters with fans on grandstands, by the roadside, sitting on walls, standing on balconies and hanging off lamp posts.

Countless amounts of kids ran towards the cars as they rolled by, with many drivers high-fiving them out their windows. Even the Jaguar convoy was treated like it was made up of celebrities, so we decided to join in and put a smile on their faces by sticking our hands out the car windows too. It was what I’d imagine the atmosphere was like during the liberation of many small villages across Italy at the end of World War Two to be perfectly honest, except with a very different motive for the all-round jubilation. 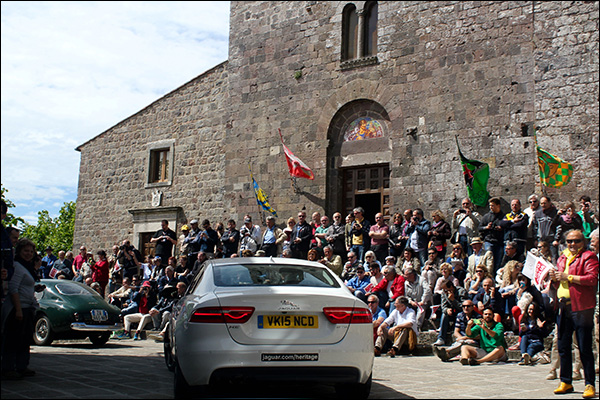 Next up was Siena itself. A stop for lunch gave us a chance to stretch our legs and watch the cars parade through the pre-13th century square of Piazza del Campo in the centre of the city. As we sat and ate the ambiance was made up of cheers, the pop from the cars’ backfiring and honking horns. It couldn’t have been more fitting to see hordes of people crowd around the square to catch a glimpse of the cars still running in the event, as it bared a resemblance to what the place must have looked like as a market during it’s long history.

Siena overall was a flashpoint which incorporated everything the Mille Miglia stands for: a passion for cars, a glamorous location, tons of fans getting close to the drivers, and the sound of hundreds of 20th century sportscars echoing off local landmarks. The run through Pisa saw us take a literal stop to catch out breath at the Leaning Tower before immediately continuing to Parma. The Leaning Tower for such a famous landmark seemed very low-key, and far smaller than I’d imagined. But I didn’t have time to dwell on that as before I knew it we were back on the autostrada heading towards our final destination.

We turned up the stereo and put on a playlist of James Bond car-chase themes as all of us in the convoy slalomed through the traffic on the iconic Cisa Highway. (No really, we did, and it was intense.) The mountainous road provided a perfect platform for all of us in the car to act on our childhood fantasies of being Sean Connery on the set of a Bond film. We laughed all the way to Parma.

Stepping into the back of a Jaguar XJ after dinner at the finish line, full from another exquisite meal and with beady eyes from seeing the cars under lights, one of the Americans on our Jaguar tour laughed out loud: “I still can’t believe all this is happening,” he said.