SUMMARY: Rain hit the Nurburgring during the second hour, with early leader the #20 Schubert BMW’s chances taking a hit when it struck the barriers and had to pit for extensive repairs. As the third hour concluded, the rain had receded and the #5 Black Falcon Mercedes led, chased closely by the polesitting #26 Marc VDS BMW.

At the start of Hour 2, the leading #19 Schubert BMW and fast-starting #84 Bentley made their first pit stops of the race, as did many other of the leading SP9 (GT3) cars. A flash fuel fire caused a brief moment of drama for the #28 WRT Audi as starting driver Mies got out. Elsewhere, the #5 Black Falcon Mercedes was hit with a penalty for not respecting the minimum pit stop time.

Getting out of the leading #19 BMW, Dirk Werner said: “I had a lot of fun. It was an exciting start. I was able to overtake the Mercedes in the second corner and from then, we’ve run the top three in formation. A super stint.” Dirk Muller was now at the wheel of the car.

Around 20 minutes into the second hour, rain was spotted on the windscreen of cars driving through the Karussell, while the #27 Zakspeed Mercedes spun and ended up facing the wrong direction against the Armco at Brunnchen – possibly a victim of the sudden shower.

With the first round of the stops completed, the #5 Black Falcon Mercedes led (albeit awaiting a penalty), while the #26 Marc VDS was immediately behind in second. The #4 Phoenix Audi was third, the #8 Haribo Mercedes was fourth and erstwhile leader the #19 Schubert BMW was fifth.

Following his opening stint at the wheel of the #25 Marc VDS BMW, Lucas Luhr reported: “In contrast to the chaotic conditions last year, this was a quiet initial phase. The car’s running great and there are no big risks.”

With the rain intensifying around the track, the Marc VDS readied wet tyres for at least one of its cars. Dirk Adorf got ready to take the #26 over from polesitter Joerg Muller slightly ahead of schedule – but the Brazilian elected not to pit first time past on lap 11.

Elsewhere, the #20 Schubert BMW was spotted circulating with heavy front-right damage in 10th position, after hitting the barrier just after Pflanzgarten. Driver Claudia Huertgen (who’d taken over from early leader Tomczyk) made it back to the pits but it would be more than a routine stop to repair this damage, she estimated an hour before the car would be back. 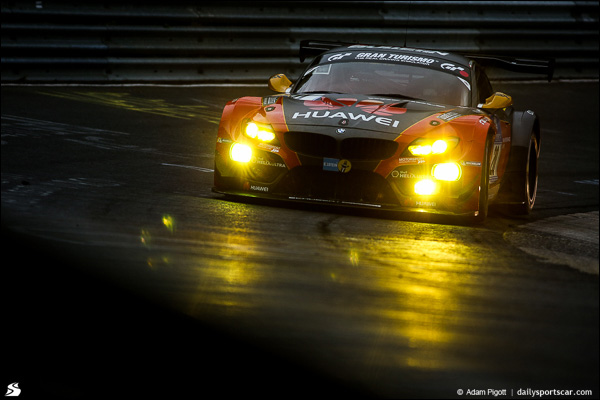 The #44 Falken Porsche also had a scare as it got wetter, briefly leaving the track at Aremberg. There was also some light contact between the #9 SCG and the #2 Black Falcon Mercedes, but both cars continued.

The news wasn’t so good for the #27 Zakspeed Mercedes, which became the first significant confirmed retirement due to bad right-front suspension damage from Christian Vietoris’ earlier off – apparently caused by contact with another car.

Out on track, the pole-sitting #26 Marc VDS BMW had made its way back to the front of the field ahead of the #5 Black Falcon Mercedes, while the sister #25 BMW came in for wet tyres. The #5 finally took its pit-infringement penalty shortly afterwards, too.

Just as the race moved into its third hour, the #85 Bentley was spotted stopped on track on the exit of Hocheichen. Driver Guy Smith was out of the car and assisting the marshals to attach it to a recovery car (it was later confirmed as a retirement).

A short while later, the sister #84 Continental GT3 had a moment at Hatzenbach and seemed to be leaking liquid, possibly fuel, from the rear. Back in the pits, the #23 ROWE Mercedes was in getting further patching up following its earlier damage.

When the leading #26 Marc VDS BMW did eventually pit for Dirk Adorf to take over, it went on to slick tyres, indicating the rain had eased off or at least got no worse since the team initially moved to make a stop. Wolf Henzler came out of the #44 Falken Porsche reporting some involvement in the incident that put paid to the #85 Bentley. He also commented: “One third of the track is wet, the rest is dry. So it makes no sense to change to rain tires.”

With two hours 40 minutes in the bag, drivers were reporting that the circuit had dried out completely and all the leading runners had completed two pit stops, including one driver change.

As the clock approached three hours, the #26 Marc VDS BMW held the lead, having stayed on slicks during the rain spell. The #5 Black Falcon Mercedes was second, but then moved into the lead on track at seven minutes to the hour.

The #30 Frikadelli Porsche was third, earlier leader the #19 Schubert BMW was fourth, last year’s winners in the #1 Audi were fifth, the front-row starting #2 Black Falcon Mercedes was in sixth and the #8 Haribo Mercedes was eighth. Completing the top 10 were the #44 Falken Porsche (with Peter Dumbreck at the wheel) and the #28 WRT Audi, with Laurens Vanthoor having just got out after a stint.