SUMMARY: The #5 Mercedes couldn’t live with the pace of the all-pro cars and fell away from the lead battle. The #26 Marc VDS BMW cycled in and out of P1 as the light began to fade, with last year’s winners in the #1 Audi coming on strong in second. Battle raged between the #2 Black Falcon Mercedes and #19 Schubert BMW for fourth until the SLS stopped on track after losing a wheel.

Early in the fourth hour, the third round of pitstops got underway, with both of the top two cars (the #5 Black Falcon Mercedes and the #26 Marc VDS BMW) making their scheduled visits within a short time of each other. Another pair of cars – the #30 Frikadelli Porsche and #1 Phoenix Audi (with last year’s winning races) – held first and second respectively as the pit stops cycled through.

Updates on some other runners: the #9 Glickenhaus SCG 003 was running 16th overall as the leading non-GT3 car. The #92 Manthey Porsche was leading SP7 in 20th overall, with its Black Falcon class rival right behind in 21st. The #29 WRT Audi was down in 51st overall after a lengthy stop to repair front-end damage and the #84 Bentley had to have a damaged door replaced at one of its stops.

Light rain was noticed again as the fourth hour came to an end, at which point the #26 resumed the lead. With the less experienced Abdulaziz Al-Faisal at the wheel, the #5 Black Falcon Mercedes’ challenge faded slightly, lapping on average 10-15 seconds slower than the frontrunners in sixth place overall.

Following a strong stint by Markus Winkelhock, the #1 Audi crewed by 2014’s race winners now became the main threat to the Marc VDS BMW’s lead, 40 seconds behind after 28 laps. The #30 Frikadelli Porsche was now third thanks to sterling work by Weissach works drivers Patrick Pilet and Joerg Bergmeister and just two seconds behind the Audi.

Black Falcon’s hopes were now being carried by the front-row starting #2 SLS in fourth, ahead of the fifth-place #19 Schubert BMW, which had led in the early stages. The aforementioned #5 Mercedes was sixth and the #28 WRT Audi was seventh. The #8 Haribo Mercedes continued its solid run in eighth ahead of the #44 Falken Porsche in ninth and #4 Phoenix Audi in 10th.

The #19 caught up to the the #2 around 30 minutes into the fourth hour and began harrying for fourth place, which temporarily became third when the #26 Marc VDS made its scheduled fourth stop. 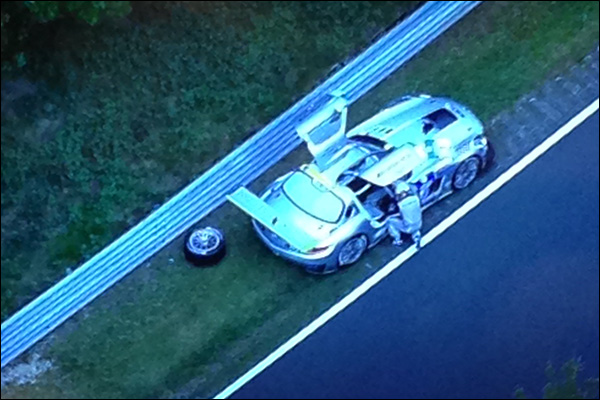 The battle was decided in unconventional fashion when the #2 slowed dramatically, then lost a wheel at Aremberg, leading to heroic efforts from Adam Christodolou to collect and reattach the offending item (above). It proved to be in vain, however, as the car was attached to a recovery vehicle and moved to a safe area behind the barriers. 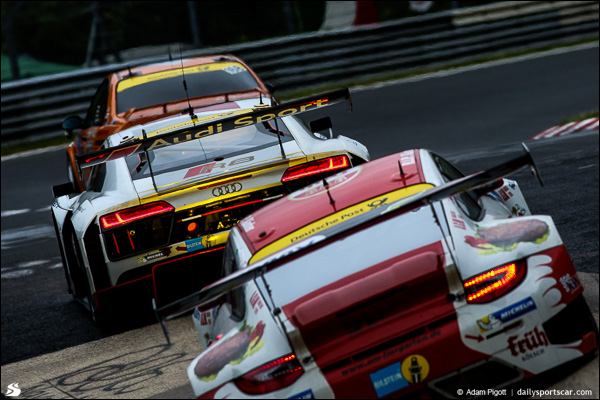 Adam’s co-driver Bernd Schneider said: “I had already prepared myself for my stint. I don’t know if something is broken on the wheel. Unfortunately, Adam could not continue on three wheels. To lift the car you need the air lance or he would have to park on a notch. He would not have got away again, so it was the only way to stop the car. I had just talked to him. Now our boys are on the way to tighten the wheel again. Then we have to look in the pits if we still have to fix something. Whether it was a result of damage, I cannot say.”

In the final minutes of the fourth hour, the #1 Audi cycled into the lead, with the #30 Porsche once again in second and the #28 WRT moving into third due to Christodolou’s incident and the #19 BMW heading for the pits.