SUMMARY: The #25 Marc VDS BMW and #28 WRT Audi are now disputing the lead of the Nurburgring 24 Hours following more big accidents during the hours of darkness that put paid to the chances of some front-runners. 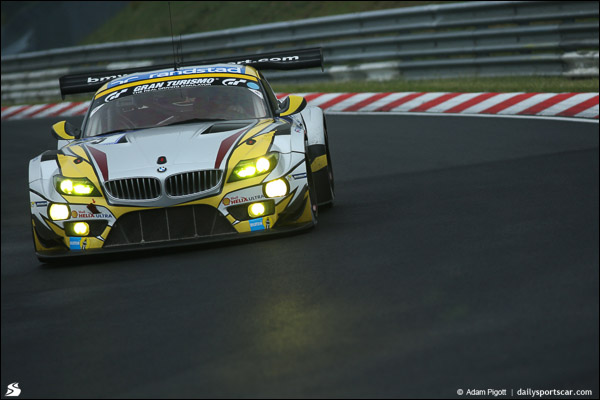 The big news overnight was a huge crash for the leading #1 Phoenix Audi driven by Christian Mamerow, which barrel-rolled into the barrier at Flugplatz shortly after 1:30am, ending its race on the spot and sending its driver to hospital for precautionary checks. There’ll be no repeat race win for the victorious 2014 crew.

Retirement also beckoned for the #22 ROWE Mercedes after a small brake fire during one of its pit stops led to recurring problems that could not be satisfactorily repaired.

Out on track, the #25 Marc VDS BMW of Luhr/Westbrook/Catsburg/Palttala was making hay after earlier losing time due to taking wet tyres on a partially dry and drying track. It was recording consistently quicker laps than new race leader the #28 WRT Audi and first headed the field shortly after 3am, alternating with its Belgian rival during pit stops from then on. The #26 VDS car was also going well in fourth and was the quickest car on track around 4am.

Around the same time, the #9 Glickenhaus car rejoined after spending time in the pits to attend to several issues, including its alternator belt and power-steering system.

At 4:25am, a big accident at Klostertal on spilled oil claimed several cars, including the #007 Aston Martin of Stefan Mucke and the #4 Phoenix Audi of Marc Basseng. The former car was recovered to the pits and eventually repaired, but the #4 Audi’s race was over on the spot. 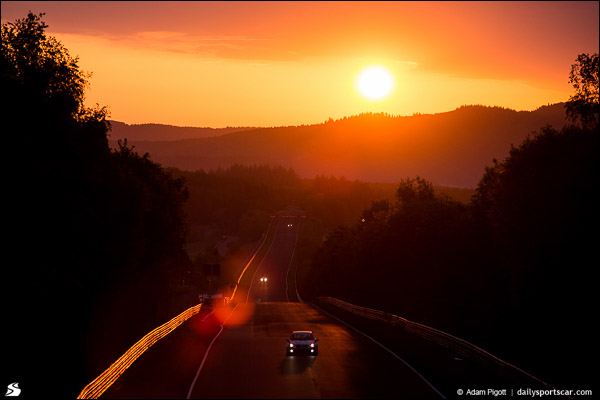 As daylight returned to the Nordschleife just after 6am, the #28 WRT Audi led the race, alternating with the #25 Marc VDS BMW on the pitstops. The consistent #44 Falken Porsche continued to hold third ahead of the second Marc VDS car, with the top five completed by the #5 Black Falcon Mercedes – now with Yelmer Buurman on board and setting quick times once again.

In sixth was the ever-improving #17 Dunlop-shod Walkenhorst BMW, ahead of the battered but still rolling #23 ROWE Mercedes in seventh. Highest-placed non-German car was the #6 Aston Martin in eighth, now flying the flag for Gaydon following the #7’s accident during the night.

The #11 HTP Bentley (the sole Bentley on Pirellis) was ninth, while the works #84 machine was a confirmed retirement during the night and the #85 was still well down the order and lapping only really to get Nordschleife experience for future events.

Rounding out the top 10 was the #33 Premio Mercedes (with Rob Huff among its drivers), which had qualified at the bottom of the top 30.