In covering GT Asia last season it was evident this was a series on the rise. Good grids and good drivers and that special ingredient a tight championship that went right to the wire.

The 2015 season started in South Korea as it did last year and the assembled entry of GT3 machinery certainly hinted at another high quality season ahead. Unlike as has become the norm in many GT3 series worldwide the grid is not dominated in numbers and quality by German machinery. A pair of Craft Bamboo Aston Martins are joined by trios of Team Absolute Bentleys (below) and FFF team McLarens.

The British marques are joined by GT Asia stalwarts Clearwater Racing who return with two Ferrari 458s and a single 458 entered by last year’s surprise package BBT racing. A further Ferrari a Lamborghini Gallardo and a single Porsche GT3-R made up a grid of 14 top class cars.

As has become the norm in GT Asia qualifying for the weekend’s two races is split into two separate sessions of 15 minutes each. Each driver qualifies for one of the races.

Qualifying for race one saw a blistering pace set by the front row pair of Richard Lyons in the #88 Aston Martin and James Calado in the #1 Clearwater Ferrari. The pair only separated by 2 hundredths of a second at the end of qualifying with Lyons coming out on top. The 2nd row hammered home the variety on offer with four different marques taking up the first 4 places. 3rd place went to Andrea Caldarelli in the #5 McLaren just ahead of Duncan Tappy in the #77 Bentley.

Race two qualifying saw another tight affair with the top three within 2 tenths of each other but Jonathan Venter prevailed in the #99 Aston Martin to give Craft Bamboo their 2nd pole of the weekend. Adderly Fong joined Venter on the front row in the #8 Bentley and Anthony Liu posted the 3rd quickest time in the BBT racing Ferrari 458.

Before the lights even went green there was drama down in the Absolute Team Bentley garage as an accident for Adderly Fong in qualifying for race two had seen a race against time for the mechanics to install a new engine. It was a case of nearly but not quite though as the car was ready to join the fray but not before the leaders had lapped the circuit twice. 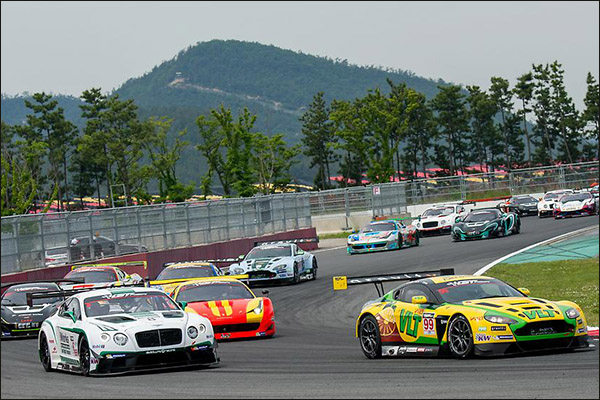 On the circuit though Lyons was immediately under pressure from Calado’s Ferrari and did well to hang onto the lead heading out of the first corner. But with his exit compromised both Calado and Caldarelli had a run and an opportunistic dive from Caldarelli left them three a breast going through turn 4 with Lyons running out of room on the exit and dropping to 4th.

The first lap also saw the retirement of both the 2nd Clearwater racing Ferrari in the hands of Craig Baird and the 2nd Craft Bamboo Aston Martin of Darryl O’Young. Both retired with suspension damage sustained in clashes in the first three corners.

Caldarelli held the lead until his pit stop but under a huge amount of pressure from Calado’s Ferrari and Lyons’ Aston Martin. When Caldarelli did pit Calado and Lyons continued their duel for a few more laps pushing until the end of the compulsory pit window. Those extra few laps had made the difference and saw Mok Weng Sun exit the pits in the #1 Ferrari with a healthy lead. 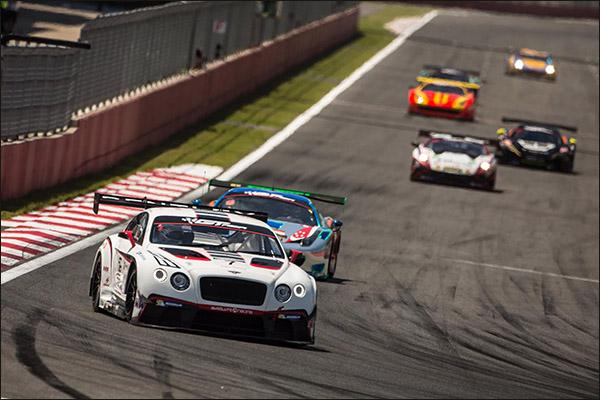 Frank Yu in the sole remaining Aston Martin wasn’t too far behind though and with Craft Bamboo opting not to change tyres Yu was able to push immediately and chase Mok who was easing in his cold fresh tyres. Once the Aston Martin had caught up the two sat nose to tail for lap after lap. In keeping each other busy they were losing a number of seconds a lap to the fastest man on the circuit last year’s championship runner up Anthony Liu in the BBT Ferrari.

As Liu caught up Mok made a last ditch attempt to hold onto the win and dived past Yu who had recently taken the lead. Mok set off but ultimately was a sitting duck once Liu had made light work of Yu. With only a handful of laps to go Liu took the lead and ended the race just under 2 seconds ahead of Mok Weng Sun’s #1 Ferrari. Frank Yu hung on to take the last place on the podium for Craft Bamboo.

The opening corners saw pole sitter Jonathan Venter hold the lead from the man who joined him on the front row Adderly Fong. Race one winner Anthony Liu lurking in 3rd waiting for an opportunity. 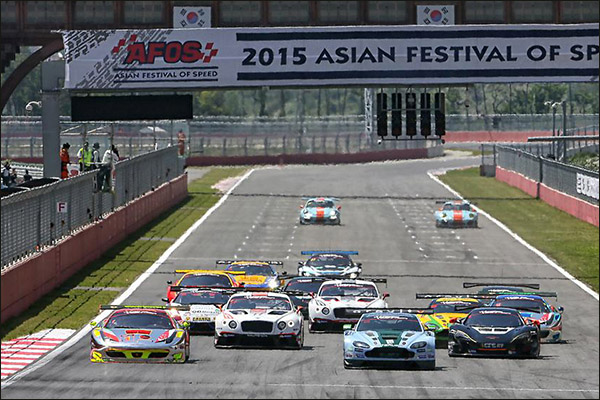 The story of the first lap was the loss of defending champion Mok Weng Sun. A messy first corner incident left him with nowhere to go and the resulting damage from hitting the #9 McLaren meant he retired on the spot and the Mclaren retired a few corners later. Avoiding the 1st corner chaos had also dropped podium man from the first race Frank Yu down the order. 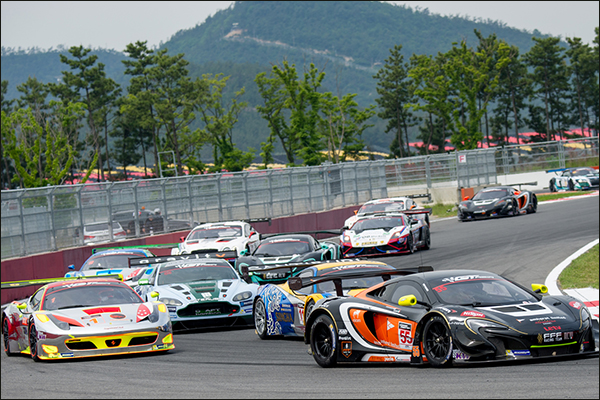 As the cars came round for lap two they ofnd the safety car waiting as it was deemed that the #1 Ferrari could not be removed safely without the field being neutralised. When the safety car released the pack Venter took the opportunity to pull away in the Aston Martin. Anthony Liu took an early opportunity to take 2nd and keep their car’s hopes of a 2nd win alive.

Early Pit stops came from Hiroshi Hamaguchi and Frank Yu in their McLaren and Aston Martin respectively. This released Tonio Liuzzi in the McLaren and Richard Lyons in the Aston Martin to chase down the field. Lyons took an early opportunity to get past Liuzzi and set about lapping at qualifying pace to make up ground lost in the first stint.

Venter in the lead pitted to hand over to Darryl O’Young and as the car had no additional time penalty in the pits due to their race one retirement O’young emerged with a healthy margin.

Behind him Race one winner Davide Rizzo had got up to 2nd and was trying to maintain as big a gap as possible between himself and a hard charging Lyons back in 4th. Lyons made light work of Keita Sawa’s Bentley to take 3rd and set about chasing Rizzo. Unfortunately as it looked like there would be a grandstand finish Lyons slowed dramatically with what turned out to be a gearbox issue. Lyons expertly nursed the car to the finish to gain valuable championship points but was to finish well down the order.

It was the sister car though of Venter and O’Young that was the star of the show. They never looked like being beaten and crossed the line with a comfortable 10 second lead. Rizzo held on to make it a win and a 2nd for the BBT racing Ferrari and Keita Sawa brought the #8 Bentley home 3rd. 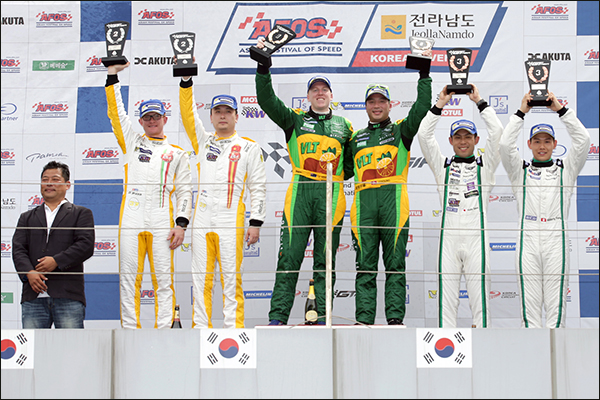 So two races down and it already appears consistency might be key for any potential championship contenders. 5 different crews made the podium over the first two races. With some high profile DNFs in both races there are teams that have got some catching up to do. The next round sees the championship’s first visit to Japan this year and a double header at the Okayama circuit between the 26th and 28th of June.