Nissan have been working hard since the Test Day but know there is a mountain to climb.

Le Mans will be about a balance between pace and survival and it’s in that regard that the team is to opting to run without the troublesome hybrid system engaged in the race, as well as at the Test Day. 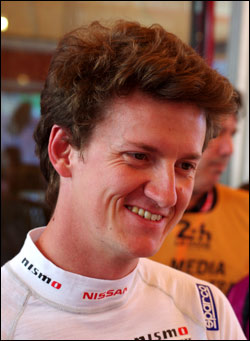 The DSC editor and Lucas tried to work out how many Nissan or Nissan-powered racecars Lucas has raced or tested thus far. The Nissan GT-R LM Nismo seems to make it at least 13, including the GT4 Nissan 350Z and 370Z, the World Challenge 370Z, Nissan GT-Rs in Club Sports, GT3 and GT500 specification, the Altima V8 Supercar, the DeltaWing and Zeod RC Garage 56 efforts at Le Mans and various Oreca and Zytek Nissan-powered LMP2s.

“It is a long list and I guess I’d like to have an ambition to be with the team for even longer than Motoyama and Krumm,” he said.

On his current GT500 programme in Super GT: “I love it! The cars are incredible, so much downforce and so much grip, with huge opportunities to work on the development of the car and the tyres. There’s also always a big fight at every race, including traffic management with the GT300. There’s real competition between Nissan, Honda and Toyota. After the first three races, though I’ll swap with Krumm, because my programme now is in F3 in Japan with the B-Max team. Amazingly, it’s my first-ever single-seater championship. I love the grip and the downforce, but like all F3 cars, they do feel a bit underpowered.” 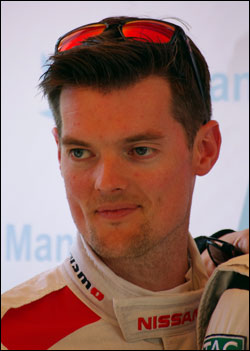 “It’s absolutely amazing to be here. Whilst, of course, being involved with Nissan you hope to get a call, but I honestly didn’t expect it. I couldn’t be prouder of more grateful for this opportunity.”

On developing the car: “It’s not an overstatement to say that every single lap here sees us moving forward in terms of set-up and performance, but we all know that it’s a very long road ahead. Everybody, though, is pulling together well and, whatever people might think, this is a fantastic thing to be involved with.”

You’ve been involved since the early days of this project, what did you think when you first heard ‘front engine, front-wheel drive’?

“Yes, I first heard at the beginning of last year and we did the first rollout in November in the States. I got call from the engineering team asking if I would be interested in helping with development. Of course I thought it was crazy at first like everybody else, it’s mad, but when Ben Bowlby explained the concept to me I thought okay, that could actually work!”

Are enjoying being the ‘father figure’ among the younger drivers?

“Yeah, I’m probably the only guy in the team with front-wheel-drive experience [Krumm raced in the Japanese Touring Car Championship in the mid-90s] so that’s helpful for the other guys who’ve never raced a front-drive car before. The technique is a bit different and you can sometimes gain advantages by driving a bit differently. You can see this the data, it’s interesting stuff. The ‘kids’ are all super-nice and super-quick and it’s fun to work with them, they’re doing a great job.”

Obviously a win is out of the question here, but do you get a different satisfaction as a driver from developing and improving a car and getting it working to its maximum potential?

“Yeah for me absolutely. I’ve always enjoyed developing new technology and new cars. It’s very challenging and interesting. I did some road-car work as well for Nissan with the GT-R Nismo at the Nurburgring, plus the DeltaWing of course. Working with the engineers closely at the track during the development process is something I really do enjoy. It’s the same with the P1 car, I was happy to be doing the development work and at the beginning I wasn’t even sure if I’d be racing it. I didn’t really think about that too much, obviously I still have my Super GT races in Japan and working with the tyre manufacturers there to develop the tyres.”

“Yes, it’s the second year of the latest generation of cars now with turbo engines and the common chassis with the DTM. The cars are very fast, almost P1 pace and very exciting to drive, with high downforce and over 600bhp.”

Do you hope to be still racing when the DTM/Super GT collaboration finally happens?

“I do but at my age you never know, I could get my ass kicked and that’s that! But I still have the motivation and as long as I keep wanting to improve every time I get in the car, I’ll still have the speed. We’ll see, I have no plans to retire at the moment.”

The sheer number of fans here must remind you of F1?

“Actually, this is what F1 lacks sometimes – the interaction with the crowd. Doing this is fantastic. It wouldn’t work at every F1 race but doing it at certain races would be cool. It’s nice to do something different.”

Nissan probably wasn’t too unhappy to get some wet running in at Test Day?

“Some of the other drivers are having a few issues getting the car settled in with this track, but I think the wet could be one of our strengths, because the car finds the traction itself – you put your foot down and it pulls you in a straight line. I think it helped us, but were nowhere near our potential yet.”

Are the ‘keep off the kerbs, stay out of trouble’ instructions from Nissan carried through to the race?

“Well there’s no point doing this race unless you’re there at the end, even more so for us, as the longer we can do it, the more we can learn. But even people who’ve been doing it for years tend to stay away from the kerbs, but there are certain ones you can hit. We avoided them all for Test Day but over the course of the week we’ll hopefully learn which ones we can hit during the race and which ones we can’t.”

Are you looking to move up from Indy Lights to IndyCar in parallel with this programme?

“It’s an option, Trevor [Carlin] has always wanted to do IndyCar. I’ve always liked it but I’m not quite sure about the whole idea of it yet. I’ve always wanted to do sportscars, even before I came into F1, I thought, however long it lasted, whether it was two or 10 years, that I’d come to Le Mans afterwards. So to come straight into a works LMP1 is a dream come true. So this is what I’d prefer to do, but I’m not going to say for sure either way – and I haven’t written off F1 yet either, as there’s probably going to be some new teams coming in over the next few years.”