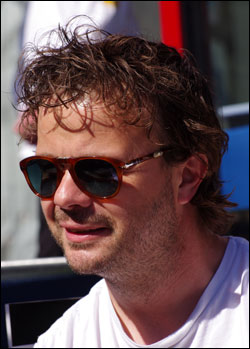 You’re driving a big front-engined V8 once again, but a Corvette not an Aston. What’s the change been like?

“It’s been good, but we had some bad luck in the first two races, but the big picture has been good. It’s a strong team with a lot of experience and my two team-mates are nice guys.”

So what’s the Corvette like to drive? It sounds good anyway!

“You can definitely feel it’s a newer car than the Aston, there are a lot of new things on the car and it feels really strong.”

Do you use the same rear-view camera as the works Corvettes? Do you find it useful?

“Yes, very hepful, it should be mandatory in every car in fact. Especially on the Test Day when it was raining a lot and you couldn’t see anything in the mirrors, it was a big help. The speed difference with the LMPs is massive now.”

So how come you’re not still with you ‘Dane Train’ team-mates in the Pro category?

“Well the team owner Jan Struve wanted to move the car to Pro, so he recruited Marco Sorensen, a really fast Danish GP2 driver, a bit younger than me, I think I belong in the Pro-Am class!”

Any particular conditions suit the Corvette?

“I think we’ll be fine whether it’s dry or wet, I think we have a good shot at the podium either way.”

The GTs have stayed at roughly the same speed this year while the P1s have got significantly quicker. Is it even more difficult to deal with them passing you now?

“I think especially as there are more P1s this year in the first, you can really feel that they’re more aggressive. In the six-hour races they’re doing every lap like a qually lap, so sometimes we feel more in the way than we’d want to be. I think they need to think about us, we have our race to do as well. It’s not easy and they’re getting too aggressive.” 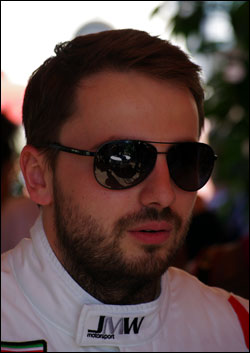 Very exciting to be here I’m sure?

“Yes, I’ve seen and heard it on TV but it’s my first time here. It’s very very special and the organisation is incredible. I’m looking forward to getting on track.”

How are you finding the focus on long-distance racing this year?

“It’s okay, I’ve done Daytona a couple of times and Petit Le Mans and I won the Zolder 24 Hours a couple of years ago. I really enjoy night driving so I’m looking forward to that. It’s all about keeping a consistent pace and not making any mistakes. This is mine and Michael [Avenatti]’s first time at Le Mans, so we want to finish well without any issues.”

How was Test Day for you?

“On the one hand it was tricky, we didn’t have so many dry laps, but in a way the wet running was good preparation for the race because it looks like mixed conditions on race day, so it’s good to know which parts are tricky are where you can push in the wet, you don’t want to be discovering that during the race.”

You’re the first Polish driver to race at Le Mans since before WW2. What’s the reaction been like at home?

“Yeah there was a guy before the war, but no-one seems sure if he was from Poland or not, so let’s say I’m the first or the second! It’s been awesome – Le Mans is one of the best-known races in Poland, it’s always broadcast there live. We had a big press conference a couple of days ago and all the sponsors were very excited. I’m looking forward to welcoming them here, as we don’t have a lot of racing in Poland, there’s only one racetrack and no real big events. It’s great to see how a big race is organised and how much promotion you can get through motorsport.”

I presume you hope this is the first of many Le Mans for you?

“Yes, I’ve been looking at endurance racing for a long time now and I think a programme like WEC would be a dream come true.” 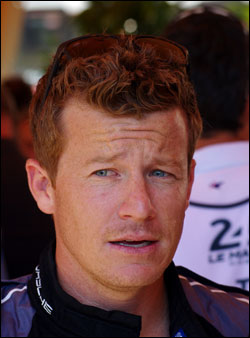 As the mob surrounding Patrick Dempsey passed by, Porsche factory driver Pat Long followed a little distance behind. “I’m getting used to this. Nowadays I just follow the wake. I’m riding the wave, if you like.”

On the prospects for the #77: “We’re looking forward to this race. Patrick (Dempsey) knows the track and I think we’ve got a shot, if all the Astons fall off, that is.”

“We’re hoping that we’ve had all of our bad luck for the season. I enjoy Le Mans and with an event on this scale, I think it’s important to try to have fun here this week. Even if it rains, I’ll try to keep smiling.”

Christian confirmed that Team AAI #68 car is Proton’s ELMS Porsche 911 RSR. “We entered the full season in the hopes of getting a third car in for Le Mans, but there has been no decision yet as to whether or not we continue in the ELMS. The tyre difference between WEC (Michelin) and ELMS (Dunlop) does cause us some issues.”

On the WEC Formula: “It’s a good formula that we can work with. Eight weekends and with six-hour races, apart from Le Mans, it’s something we can sell, and something we can support logistically. You would expect me to say, though, that balance of performance is always going to be a concern to us.”