With a dusky and overcast sky settling across La Sarthe, the teams prepared for the first session of qualifying. The only pre-start news of significance came from the Murphy Prototypes camp, where confirmation arrived that the tub had been signed off as okay by the ACO. The team had been working hard during the break on repairs and would continue to do so in the hope of having the car back out again towards the end of the session.

From a lengthy queue at the head of the pitlane, the #47 KCMG LMP2 and Toyota #1, Buemi at the wheel, emerged first, accelerating up towards the Dunlop Chicane to get the 83rd Le Mans 24 Hours properly under way. Just eight of the 33 prototypes failed to join the fray at the first call, but as the leading group ticked off their opening laps, the rest, bar a tiny handful, joined in.

The first flying lap drew gasps from the assembled journalists in the media centre, with Timo Bernhard clocking 3:17.767 for the #17 Porsche 919 , but this was just the beginning. Within seconds Neel Jani had bettered that with a 3:16.887 for the #18. The die was cast, and within moments of the real action beginning, the record books had already been re-written by the class of 2015. 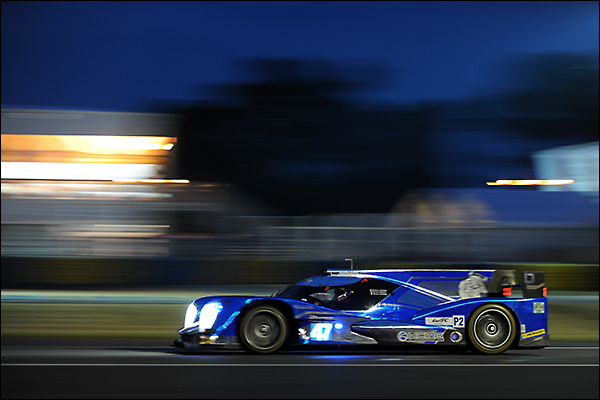 In P2 much the same story was emerging, but it did at least take a little longer. First to show was Bradley in the #47 KCMG Oreca 05, quickest in practice and quickest in the early minutes of qualifying as well. His opening flyer of 3:38.032 was a second quicker than Jon Lancaster’s preliminary best from the #41 Greaves Gibson Nissan.

Darkness descended fairly rapidly, but the forecasted rain held off, and as the remaining cars appeared on track, the two prototypes groups settled down into the anticipated order; only the three Nissans and the Kolles CLM failing, at this stage, to better the entire P2 field. Mardenborough had the #23 Nissan GT-R out and setting times, but the sister cars remained resolutely pit-bound.

Bernhard returned to the pitlane early and handed over the red-liveried #17 to Brendon Hartley, and there were similar driver changes for the top Audis and Toyotas. Tandy, last of the Porsche drivers to take to the track in the #19, swept through to join his team-mates at the head of the field with a 3:19.297, third quickest with twenty minutes gone, the Stuttgart cars showing a clean pair of heels to the first of the Audis; the next-best being #8 on a 3:19.866.

After the blistering pace displayed in those opening minutes, the session settled down to something a little more relaxed, at least for those watching. With the top three places occupied by the trio of Porsches, Audis filled the next three, then the pair of Toyotas and the Rebellions eighth and ninth.

With half an hour gone, the leading P2 runners were occupying 11th and 12th overall, with the #34 Oak Racing Ligier HPD 13th and third in P2. The #36 Signatech Alpine, seventh in P2 at the time, suffered the indignity of having its first five laps deleted following a succession of track limit abuses in Zone 6 – Tertre Rouge. Others would receive ‘final warnings’ for the same offence, but none would be similarly penalised.

Order change then became a rarity in both prototype classes. Mitch Evans popped up to third in P2 aboard the Jota Sport Gibson #38, nestling in behind the similar Greaves chassis and ousting the #34 Oak Ligier. That happened at 22:34, and moments later the #37 SMP BR01 Nissan was off the track at Tertre Rouge, Kirill Ladygin catching a wheel on the grass and forcing a yellow zone restriction from the Esses. 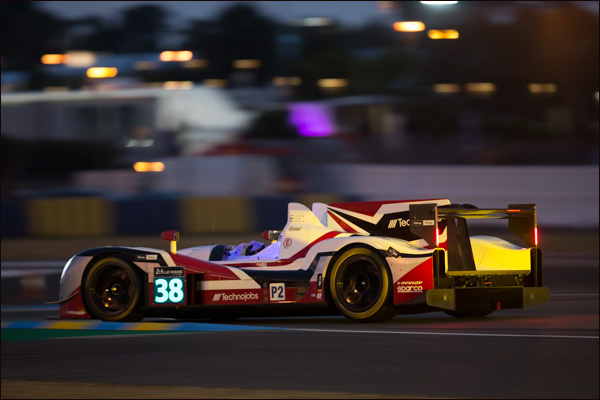 Slowly but surely, Mardenborough was coaxing the #23 Nissan GT-R onto the tail-end of the P1 pack. An improvement of several seconds saw him post a 3:38.468 to split the leading pair in P2, leaving just the #47 to the fore. Pierre Kaffer was also doing his best under difficult circumstances to catch the pack for Kolles, but with forty minutes gone, his best was still only good for 17th overall.

The yellow zone through Tertre Rouge was finally cleared with three quarters of an hour gone, and this opened up the opportunity for some improvements … but nobody took it. A session that had started out with shocked astonishment at Porsche’s opening gambit had developed into something that seemed to offer about as much excitement as redecorating the bathroom. The only prototype making ground, frustratingly slowly, was Michael Krumm’s #22 Nissan GT-R, steadily climbing through the P2 midfield to stand 25th overall with nearly an hour gone.

That moment was marked more significantly by a minor spin for Tréluyer in the #7 Audi in the first chicane, having just done his fastest first sector, which was followed immediately by an unrelated red flag. The initial deduction, from the timing screen data, was that the stoppage was caused by an incident at Mulsanne Corner involving Gaëtan Paletou in the #41 Greaves and, possibly, the #9 Audi, but news was a long time coming. When it did, the view of the Gibson chassis returning to the pitlane on a flatbed confirmed the supposition of Paletou’s involvement, but little else, save that the session would continue to be suspended for a further twenty minutes while repairs were carried out to the barriers.

During the enforced interval Tristan Gommendy, recently replaced in the #46 Thiriet by TDS Oreca 05 Nissan by Pierre Thiriet himself, was summoned to Race Control “immediately”. He’d placed the coupé fourth in class. Meanwhile, work continued apace in the Murphy garage, where the #48 Oreca 03R was starting to take on a more familiar shape.

The session resumed at 23:25, with João Barbosa first to rejoin the circuit in the #40 Krohn Ligier. He headed out all bar one of the prototype field; only the #48 Murphy not yet ready to play the game. For the first time in more than an hour a handful of improvements appeared on the screens, with Tréluyer, Nakajima, Sarrazin and Beche all posting faster times for their respective cars, and that a significant improvement for Nakajima, finding an additional four seconds for the #1 Toyota and slotting into 7th… only for Sarrazin then to leapfrog the Japanese with a 3:23.543 aboard the sister car.

With just over 20 minutes remaining there was a muted cheer from those who spotted the #48 Murphy Oreca accelerating hard up the hill towards Dunlop as a result of an impressive display of gritty determination from the Irish P2 squad. They’d worked relentlessly throughout the mid-session break and beyond to have the car back together again and, judging by a first flyer of 3:45.531 from Nathaniel Berthon, they’d done a good job too. He followed that with a 3:44.513, and claimed another three places in the process before pitting.

In the closing minutes, a brief flurry of improvements saw Harry Tincknell snick through the middle of the P2 field to place the #22 Nissan within a fingernail’s touch of the top-twenty, while Tréluyer found a few more tenths in the #7 Audi to enhance his grip on 6th; 3:21.839 still five seconds shy of that astonishing 3:16 from Jani right at the start of the session.

Oliver Turvey was another to shave a few tenths off his car’s best, posting a 3:39.004 to firm up Jota’s hold on third in P2, thereby closing to within a second of the garage-bound #41 Greaves Gibson. Sam Bird’s final offering of 3:39.867 not only denied Tincknell that 20th place, but also slotted the #26 G-Drive Ligier into a class 4th, 15th overall.

The session ended with Tréluyer in the gravel at the first chicane and (as yet unconfirmed) Townsend Bell off on the exit of Mulsanne Corner with the #62 Scuderia Corsa F458 Italia GTE Am. The resulting yellow zones ensured that there’d be nothing better to come from anyone else before the chequered flag.

So ended a frankly quite bizarre qualifying session, with all the main action taking place inside the first five minutes, and the remaining two hours offering really very little of significance. If Thursday proves the forecasters correct, and we’re heading for uncertain weather, then tonight’s times could have seen pole already settled. Return to this space in twenty-four hours to find out if that prediction holds true. 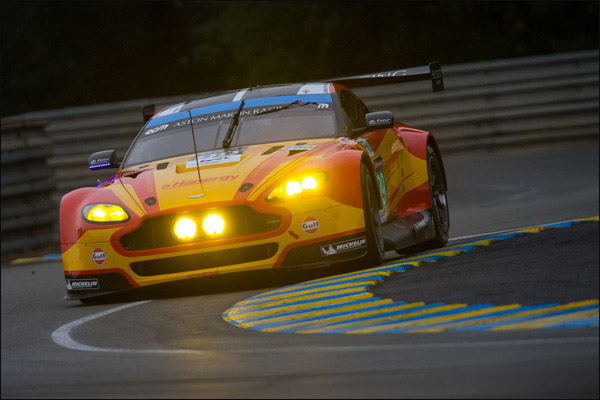 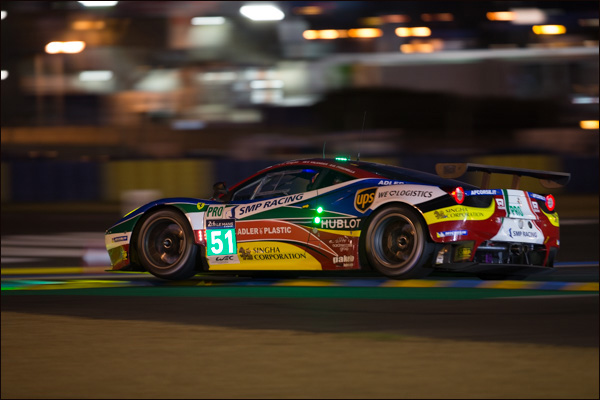 That order settled down with about half an hour on the session clock, with every GTE Pro car having set a represtative flyer. The Corvettes were lying fifth and sixth in class and the Porsches seventh and eighth. Garcia improved the #63 Vette’s position to fourth with 3:55.963 set just after the half-hour mark, demoting the #97 Aston to fifth.

The Corvette was then bumped up to third when every lap recorded up to that point by the #71 Ferrari was deleted by the stewards for exceeding track limits. The positions remained pretty much static from then on, with most teams electing to use this time to give their drivers their mandatory night qualifying laps.

Red flags flew once again for an incident at Mulsanne corner that damaged the barriers (seemingly involving the Greaves LMP2 car), with the track not going green again until nearly 11:30pm – a local curfew ruling out any extension to the running time beyond its originally scheduled midnight finish.

The GTE Pro cars again ran at a relatively subdued pace once the track went back live, resuming their interrupted cycling through drivers’ mandatory night laps. That left the order at the end of the session as follows: 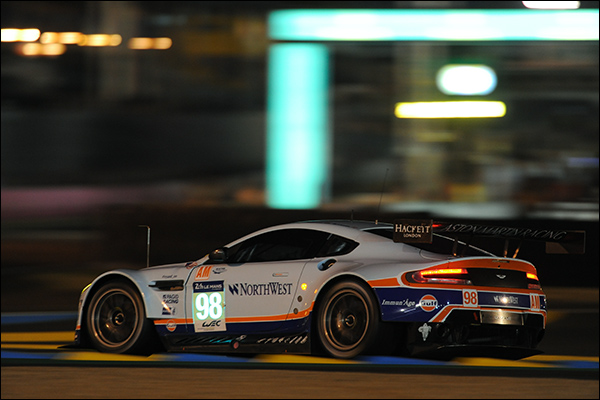 At this stage, about 30 minutes of the scheduled two hours had passed and neither the #50 Larbre Corvette or #67 AAI Porsche had been out to set a time – although they had both managed to get out 10 minutes later.

There was trouble for Cameron in the #55 AF Corse Ferrari as he was off the track at Mulsanne for a few moments before rejoining with marshal assistance. Not long afterwards, the reds came out and everyone trailed back to the pits.

Once the track went green again, the times being recorded were well north of four minutes, indicating mandatory night laps were being completed at a reduced place. The third-quickest #72 SMP Ferrari was involved in a hairy moment with the Signatech Alpine LMP2 car heading into the first corner, however, with light side-by-side contact but both cars staying on track.

When the flag fell, the whole field returned to the pits save Townsend Bell in the Scuderia Corsa Ferrari, who seemed to have had an incident at Mulsanne. As in GTE Pro, there were no last-gasp quick laps from the Am runners, leaving the top three looking like this: