Porsche led the 83rd edition of the Le Mans 24 Hours after an hour of racing: the #17 919 headed the field with Bernhard at the wheel.

The start of the race saw a magnificent tussle between the factory cars out front. The #17 Porsche of Bernhard immediately took the lead of the race, while the #8 and #7 Audi R18s also made their way up the field. By the end of the first lap, the #17 led the #18, but the #19 Porsche of Hulkenburg slipped behind a pair of Audis and fell to fifth after Duval and Lotterer made their way by. 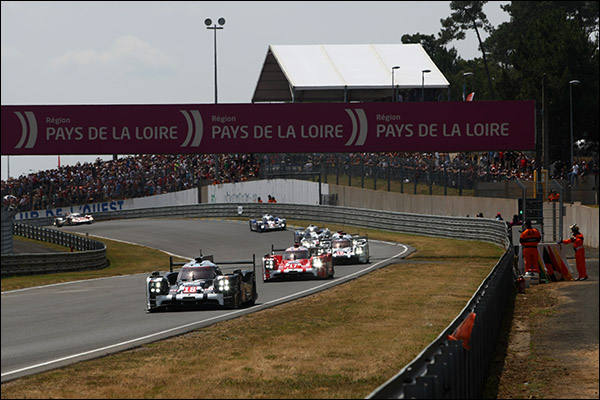 On the second lap Bonanomi also managed to get by the F1 stalwart in the #9, to push the #19 Porsche 919 behind all three R18s. The Toyotas sat behind watching in seventh and eighth.

The #23 Nissan didn’t take the start of the race due to clutch issues during warm-up, while the #22 and #22 of Tincknell and Ordonez respectively made their way through the LMP2 runners pretty easily in the opening laps after their grid penalties. Mardenborough, who started the race in the #23, managed to get out of the garage after 20 minutes of racing. Later in the hour the #21 GT-R LM NISMO would lose time also for the left-hand door opening mid-lap, which forced it to make an extra stop.

At the head of the field, the frantic action continued and just 20 minutes into the race the factory P1 runners started to lap the GTE field. The #8 R18 of Duval was on the prowl and while slaloming through traffic ran wheel-to-wheel at times with the second place #18 Porsche of Jani. It was all for nothing though, as Lotterer managed to get by Duval while Hulkenburg snatched fifth back off Bonanomi.

After seven laps, the #17 Porsche led the field, behind was the #18 Porsche, #7 and #8 Audis, #19 Porsche, #9 Audi and #1 and #2 Toyotas. First to pit was the #9 Audi after 30 minutes, Bonanomi’s crew opting to just stick fuel in the car. Only then when the pit cycle started did the action begin to calm down. 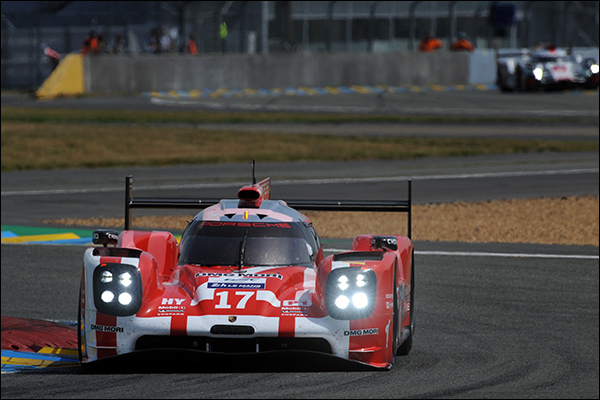 At the end of the first round of stops, the #17 Porsche continued to lead the #18, but just by a hair, the #8 and #7 Audis rounded out the top four. The top six runners were in fact just separated by eight seconds as they hit the 45-minute mark.

With the hour winding down a scrap broke out for the lead. The #18 Porsche of Jani managed to run bumper-to-bumper with the #17, but the Swiss driver couldn’t make anything stick, even with the help of traffic. It was Porsche running first and second with 23 hours remaining. 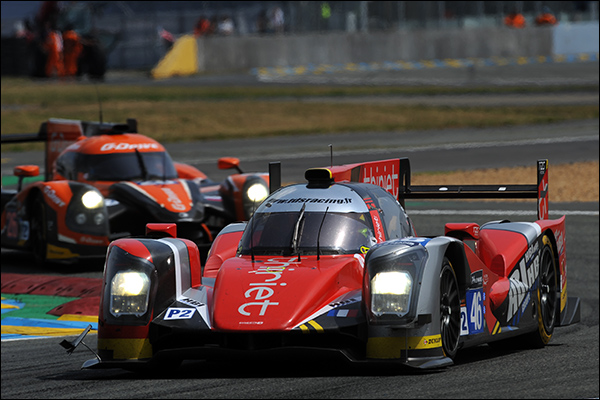 The cars moved off the grid at 14:52 and significant notes relevant to LMP2 included the relegation of the Nissan GT-R LMs and ByKolles CLM P1to the 15th and 16th rows of the grid, behind the entire LMP2 field save the Ibanez Oreca #45.

With the #23 Nissan encountering clutch issues prior to the start the car would form up in the pitlane (after not running at all in warm-up) and there was a corresponding gap on the grid, leaving just the #21 and #22 having to face the challenge of working through the P2 prototypes. Speaking to Mark Patterson (Murphy #48) earlier in the day, it would be a challenge. He conceded that the Nissans were not much quicker than the P2s from the start of the Porsche Curves all the way through to Tertre Rouge, making it harder still for the front-engined P1s to get by the nimble-footed LMP2 cars.

The Audi R8 pace car lead the weaving field around the circuit at a steady pace. The Ibanez car was spotted to have moved ahead of the ByKolles and Nissan cars.

Rounding the Ford chicane, the cars snuggled together for the final yards to the startline, the clock ticking over to 20 seconds past the hour as the noise of all that massed horsepower erupted through the canyon of the tribunes.

In P2, there was a clean start throughout the field and, as expected, a quick acceleration up the pit straight from the two Nissans, passing three or four P2s on the run up to Dunlop. There was no such fortune for Pierre Kaffer in the ByKolles P1, dropping back a dozen places to be among the GT tailenders.

There was ducking and diving aplenty throughout the first lap, with most eyes on the head of the field missing some key moves in the P2 leading group. Bradley in the #47 KCMG Oreca held the lead, but Lancaster in the #41 Greaves Gibson got ahead of Sam Bird in the G-Drive Ligier, who had an uncharacteristically untidy start. Oliver Turvey also through in the Jota Gibson #38, leaving Bird in the #26 in fourth and #46 Thiriet by TDS fifth from the Signatech Alpine #36 sixth, #34 seventh, Murphy in eighth, #43 ninth and #28 rounding out the class top 10.

Having made such poor start, Bird was clearly fired up and determined to make good his losses. He was back up to third at the start of the second lap, and then dived through on Turvey in the #38 on the approach to the second chicane. Turvey attempted to battle back, but Bird held the place, and started to ease clear, allowing Gommendy in the 46 to start threatening from behind.

Moments later, Gommendy was through, and Bird was then drawing down on Lancaster in the #41, who lost second to the orange-and-black Ligier before the field came through to begin the second lap.

The next change saw Gommendy passing Lancaster for fourth, but Sam Bird really had the bit between his teeth, and had not only recovered his start position, but was bearing down on Richard Bradley in the #47 for the lead.

Four laps into the race and it was all action in P2. As the #45 Ibanez Oreca was awarded a stop-go for jumping the start (although it seemed to be just a case of being out of position, as we’d spotted earlier) Vanthoor in the #34 passed the #36 Signatech Alpine on the approach to Mulsanne Corner, after almost a whole lap of side-by-side racing.

With 20 minutes gone, we had the first issue for a P2 runner, with the #29 Pegasus Morgan into the pitlane and then the garage for attention. Further back the leaders were already working their way through the tail-enders. 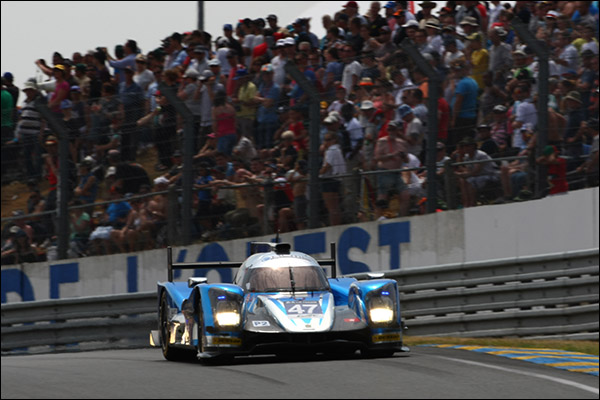 Next time around it became even tighter, with Bradley initially losing the lead, only to re-take it seconds later, and having lost the front slot he’d held so briefly, Bird appeared to slow again, allowing Gommendy through to second on the charge along the Mulsanne. Some damage to the front of the G-Drive was noted, suggesting the exchange had been a little more physical than Bird might have liked.

These three now faced the additional challenge of having Kaffer bearing down on them in the ByKolles CLM, the P1 driver steadily working through from the back of the grid, where problems on the formation lap had set him at the start of the race.

Turvey in the #38 then started to encounter an electrical issue of some kind that was affecting the gearshift and began to slip through the mid-field, with Nathanaël Berthon passing the Jota Gibson part-way through the ninth lap. A stop-go was announced for the #29 Pegasus Morgan, adding to the team’s early-race woes.

The first of the LMP1 cars started to pit for fuel and a handful of the P2 cars followed suit. Turvey pressed on for one more lap, and then pitted, at what was probably his scheduled time, but with the added delay now of having need for repairs to correct the gear selection issue.

Steadily the P2 cars made their first pitstops, with Berthon the last to do so, meaning that the Murphy #48 completed the 11th lap as class leader. Only Oak Racing made a driver change, with Nicolet handing over the #35 to Merlin. Turvey, meanwhile, rejoined the race for Jota, but down in 49th place.

With the pitstops completed, the order at the end of Lap 12 saw a quick stop for the Thiriet by TDS squad easing Gommendy into the lead, ahead of Bird in the G-Drive and Bradley in the #47 third. The second Oak, #34 (Vanthoor) was through to fourth ahead of Lancaster in the Greaves #41 and the Signatech Alpine fifth.

Two genuine positions to the good, Berthon had the Murphy Oreca up to sixth, ahead of the Team Sard Morgan #43 and the second G-Drive Ligier in eighth. Strakka’s Dome #42 stood in ninth and the first of the ESM Ligiers rounding out the top ten.

Five minutes before the hour and we had a change for second, with Bradley getting back ahead of Sam Bird to set the KCMG #47 into second once more.

The race finally looked to be settling down after a frenetic 60 minutes when it all went awry again. Kane was heading down towards the first chicane in the #42 Strakka Dome when the #92 Porsche ahead of him suddenly slowed, spewing oil across the track from a blown engine. With nowhere to go, Jonny appeared to catch the slick the Porsche was trailing, and twitch sideways just as the LMP1 #13 Rebellion was coming up to lap him. The two made contact. Kane managed to recover, and rounded the chicane successfully, but Imperatori in the Rebellion wasn’t so lucky, and ended up in the gravel.

The fiery Porsche then brought out the safety car and that’s how the first hour concluded for LMP2. 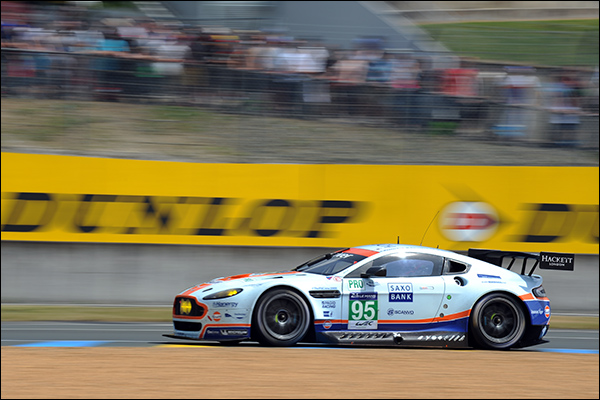 Bruni stole the lead away from Stanaway’s pole-sitting Aston Martin at the start, but this wasn’t to last long as the Aston Martin found its feet halfway round Lap 2 – a bold move on the run into Indianapolis giving Stanaway back the lead position.

In GTE Am, Giammaria’s #61 AF Corse Ferrari had lost ground on the formation lap, dropping to the back of the field before re-starting the engine and catching the tail of the grid, gaining position as it crossed the line and climbing back to ninth after as many laps.

As the #67 Team AAI Porsche took its five-minute stop-go penalty early, Nicki Thiim had commenced his own offensive; up to second on Lap 2 with the #95 Aston Martin overtaking both team-mate Mucke and Bruni’s Ferrari, which had lost a little of its initial bravado.

Lamy held on to his Aston Martin’s GTE Am pole and held steady, fifth on the road of all the GT cars and separating the leading gang of four Pros from the chasing pack of Oliver Gavin’s singleton Corvette ahead of Richard Lietz and Patrick Pilet’s Porsches. The lead Am Aston was 2.6 seconds clear of the rest of its Am challengers, these headed by Andrea Bertolini’s SMP Racing Ferrari and Pat Long’s solid-looking Dempsey Porsche. James Calado’s GTE Pro AF Corse Ferrari was making inroads through the Am field from its low starting position, but was over 10 seconds off the lead of its class. The #71 car made its way to the back of the GTE Pro train on the road however after just 45 minutes’ racing.

Pedro Lamy was the first of the GTs to pit, just taking fuel but allowing Long and Bachler’s Proton Porsches space with low fuel to put in some improving sectors. The real scheduled GT pit activity started around 51 minutes and 12 laps in: Gavin’s Corvette first, then Pilet’s #92 Pro Porsche. A gaggle of Am Ferraris followed suit, Matt Griffin leading in and taking a very quick stop, followed by Paolo Ruberti (Larbre Corvette) and Rafaelle Giammaria, the #61 driver handing over to Peter Mann as the only driver change. Gimmi Bruni had a good outcome from the stops, leapfrogging Stanaway for second.

Stanaway meanwhile had other things to worry about as the race’s first hour closed: team-mate Mucke was all over the back of him.