LMP1
Porsche retained the lead through a mostly neutralised hour, with the safety car extending the German marque’s lead. 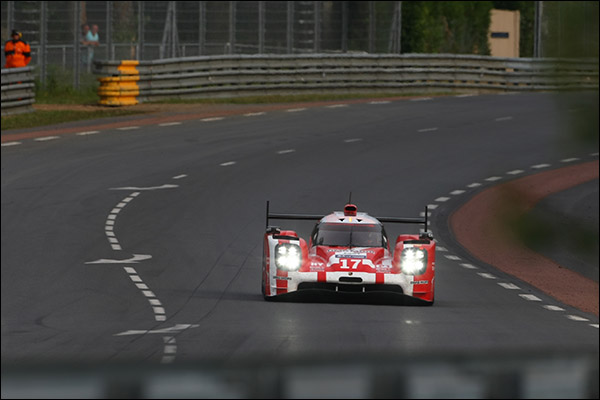 When then action got going again 40 minutes into the hour, it turned into a three-way battle for second place. Treluyer as the race went green immediately snatched second in the #7 Audi off Lieb. The screens showed helicopter views of the prototypes at the restart which looked like footage from the M25!

Leading the way was Hartley, with a gap of over a minute helped by the safety car splitting up the frontrunners. The gap was big enough that the Kiwi was able to come in for his fourth stop and emerge from the pits in the lead at the end of the hour. That round of stops however changed the top three further. With 20 hours remaining Porsche led the way (#17) with the #9 Audi second, and the #7 Audi third.

LMP2
The fourth hour began with the race under safety-car conditions following the incident involving Duval at Indianapolis. The full-course situation encouraged quite a few LMP2 teams to make unscheduled pitstops, including G-Drive (#28) and Pegasus (#29).

By 20 past the hour the P2 order had resolved into a top 10 that featured the #47 KCMG leading from the #46 Thiriet by TDS Oreca, with the Murphy Oreca #48 (yet to make its next pitstop) in third. The #34 Oak Ligier held fourth, pulling clear of the Greaves Gibson #41 in fifth. The Team Sard Morgan #43 held sixth from the #26 G-Drive Ligier and the Signatech Alpine #36 (which had just pitted and dropped back from third). The Strakka Dome was eighth from the G-Drive #28 and the first of the SMP Racing’s BR01s, the #27.

The #43 then pitted, dropping down several positions, and like most of the teams bringing in their cars at this series of stops, made the driver change to Amberg.

At 18:25 the race witnessed yet another unexpected engine failure from one of the GT Porsches at the second Mulsanne chicane. The safety car, which had been due to be called in at the end of the lap, was kept out while the spilled oil is attended to. 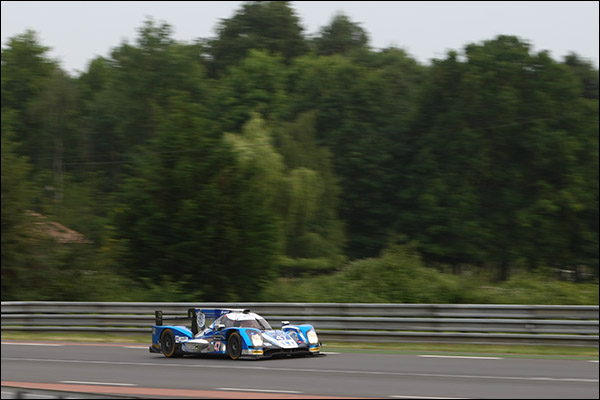 Having taken over the #48 from Berthon, Chandhok was lucky not to have his nose taken off by Turner’s Aston, as the V8 Vantage diced for the GTE Pro lead. Wise to the risk, the Indian racer anticipated what was about to happen and pulled back as the #97 cut clean across the Oreca’s nose as they negotiated the first chicane.

The #45 was given a stop-go for crossing the pitlane white line at the exit. The Ibanez squad has not enjoyed a good race so far. 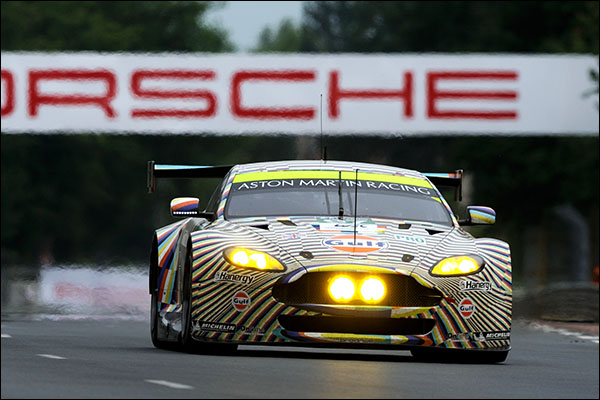 At the start of Hour 4, the GTE Pro leading pack pitted for their third round of scheduled stops under the safety car for the #8 Audi’s crash, which also involved the #51 Ferrari, #50 Corvette and #99 Aston GT entries. Once they’d emerged, it was the polesitting #99 Aston that was in the lead, with Rees at the wheel. Rigon was second in the #71 AF Corse Ferrari, with Turner third in the #97 Aston art car ahead of Milner’s Corvette and the #51 Ferrari, which had endured an extended pit stop.

With the safety car still out, Ried pulled the #88 GTE Am Abu Dhabi Porsche to side of the track with flames coming from the engine compartment – the third Porsche fire of the meeting. Shaytar now led this class, albeit with a scheduled stop still to make. Dalla Lana was second in the #98 Aston and Perrodo third in the #83 AF Corse Ferrari, which also had made only two pitstops. Shaytar made his expected stop while the safety car was still out, shortly before it came in with the GT leaders having completed 46 laps.Turner jumped from third to second at the restart, where Rees in the #99 lost out badly and dropped to fourth. There followed an epic four-car battle down the Mulsanne, with Milner able to use the Corvette’s superior straight-line pace to make it #64 Corvette from #97 Aston from #71 Ferrari by the time they reached Mulsanne corner. 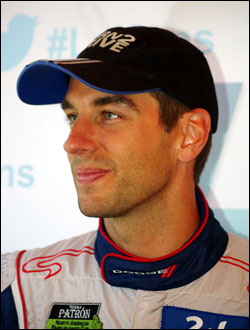 GTE Am had settled down with Dalla Lana ahead of Keating and Shaytar, with all having made three scheduled stops. “I did a triple, the tyres were fantastic. Although we lack top speed vs the Ferraris and Porsches, once we’re in the clear it’s fine,” said Keating’s co-driver Bleekemolen upon getting out of the Viper. Perrodo in the #83 Ferrari finally followed suit on lap 48 and rejoined fourth in class.

The Pro battle continued to rage on lap 50 as the fourth hour drew to a close, with Rees getting past Rigon for third while Turner and Milner continued to give no quarter in second and first. Turner finally spun going through one of the Mulsanne chicanes, giving Milner breathing room and rejoining fourth.