The #9 Audi held the lead at the end of the eighth hour of racing at Le Mans, but the top four became bunched up when the safety car came out.

Hour eight kicked off when Dumas (#18 Porsche) missed his braking point on the run down to Mulsanne Corner and hit the barriers on the run off pretty hard. He got going again, and made his way back to the pits so the crew could replace the front-end. It cost them valuable time though, and when Jani climbed aboard the #18, it had slipped to fifth overall.

The top four became very bunched up after this, just over 30 seconds separated them meaning each pit stop shuffled the order. The true leader at the time was still very much the #9 Audi however.

Webber’s pace improved significantly at half past the hour, with the Australian’s lap times dropping to 3:22s consistently. That improvement in the #17 meant the car was either matching or beating the other front runners. 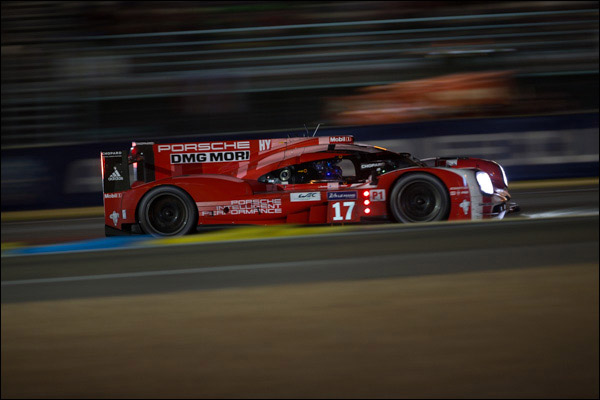 The safety car period nullified the #9 Audi’s lead at the head of the field, bringing the overall gap between the top four down to under 10 seconds as the hour came to a close. The #22 Nissan was also pushed into the pits as darkness fell over Le Mans – the only one of the GT-R LM NISMOs to run reliably to this point was having its first niggles.

With the track embalmed in full darkness, save the floodlights illuminating the major corners and chicanes, the race entered the eighth hour. There had been little change at the head of LMP2, with the #47 KCMG extending the lead that it had held almost uninterrupted, save a couple of instances for pitstops and one overtake, since the start at three o’clock. That lead grew early into the hour when the #46 pitted from second place, with Gommendy taking over from Thiriet. 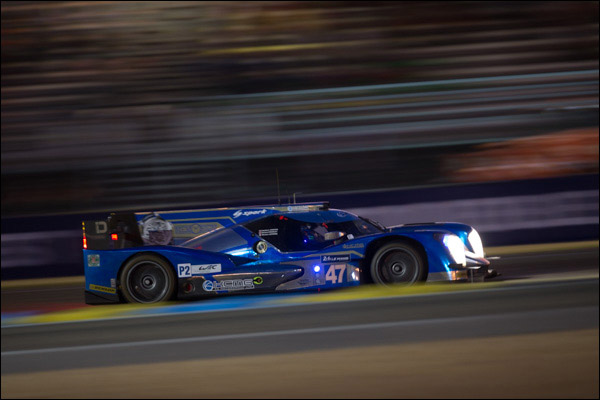 Five minutes later though, the status quo was restored as Howson pitted the #47, but rejoined still enjoying a generous cushion over the Thiriet Oreca. Further routine pitstops followed in quick succession for the #43, #36, #28 and the #42.

The stop for the #29 Pegasus Morgan at 10:12pm was less routine, and not in the pitlane. The car was reported slowing through zone 34, the final element of the Porsche Curves. It limped into the pits with a flat tyre. Concurrently, Barbosa was pulling over onto the hard shoulder along the Mulsanne in the Krohn Racing Ligier. The marshals hauled the car backwards out of harm’s way, but it wasn’t long before the Portuguese driver had coaxed life back into the Judd engine and had the car moving again, aiming for the pits.

Routine pitstops came at twenty-past for Bird (from third) in the #26, and Vanthoor came into the pits from ninth, thereby dropping the #34 down to 10th behind the Strakka Dome.

Notably, Berthon had regained two positions to be running fourth. He was now 25 seconds down on the #36 Alpine, but had just 15 seconds’ advantage over the chasing Rusinov in the #26 Ligier. Turvey was running strongly in the #38 Jota and had set a new fastest lap for of 3:39.055 for the Jota Gibson.

Having made up those positions, Berthon pitted the Murphy Oreca from 4th at just after the half hour, and promptly lost the position to Rusinov in the G-Drive Ligier. He stayed aboard the #48 for another stint. Another driver pushing hard, with some success, was Rusinov’s team-mate Derani in the #28 G-Drive, posting successive fastest laps for the Ligier. 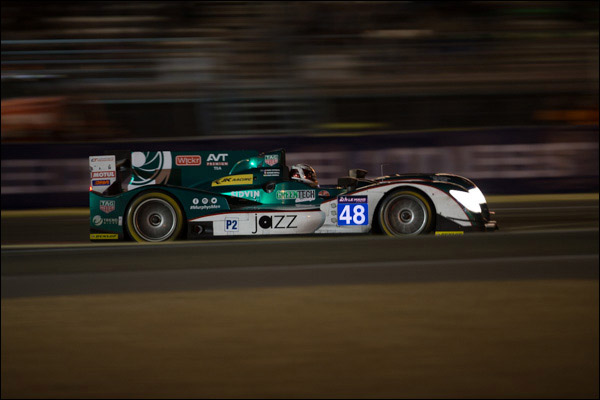 After some significant period without any major incident, the track turned yellow at Mulsanne Corner, with Chatin in the #36 Signatech Alpine beached in the gravel on the exit. There appeared to be extensive rear-end damage, with the rear wing missing, at least in part, and associated damage to the rear three-quarters. He’d been running a strong third in P2. It was obvious he’d not be moved easily, and at 10:40pm the safety car was deployed.

The heavily damaged Alpine, with Chatin still strapped into the cockpit, was lifted clear by the Manitou and carried away from the gravel and deposited behind the barriers.

Several P2 runners took advantage of the situation to take on fuel. Gommendy was the first to pit, taking the #46 through the pitlane from second, and then the leading KCMG Oreca and Turvey in the #38.

At the top of the eigth hour, it was still the sole works Corvette leading the two Astons in GTE Pro. Solid work from Bergmeister in the #91 Porsche had got it into a position where it was poised to move onto the podium should one of the top trio hit trouble.

The #98 Aston was still untroubled in the lead of GTE Am in the hands of Lamy. There was a gap of around a minute and 17 seconds to Collard in the #83 AF Corse Ferrari, with Bertolini third in the consistent #72 SMP Racing 458. Fourth in class had moved back in the direction of the #77 Dempsey Porsche, now with Long back behind the wheel. 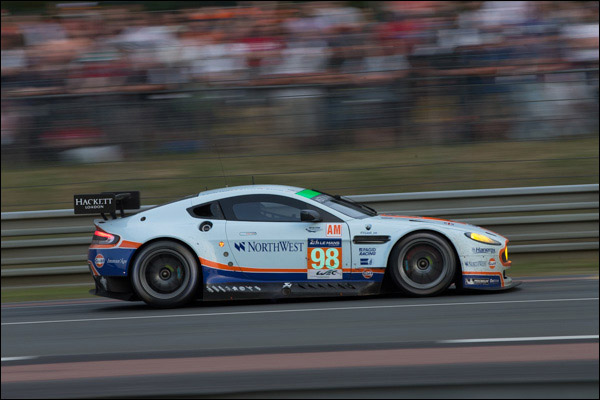 The #53 Viper had dropped back from its previous podium-challenging position due to an unscheduled stop to inspect for potential damage after an off-track moment. It was now sixth in class behind another American entry, the #62 Scuderia Corsa Ferrari, with Bill Sweedler at the controls.

Up front, the GTE scrap was still on a knife edge, with Bell in the #97 Aston getting to within two seconds of Taylor’s rumbling Corvette, MacDowall dropping off a bit and a further 20 seconds back in the #99 Aston. Taylor seemingly had plenty in reserve, though, as he was able to respond and put 10 seconds’ daylight (or rather rapidly closing darkness) between him and the Aston art car. His good work was undone almost immediately, however, when the safety car was called for a stranded P2 at Mulsanne corner. 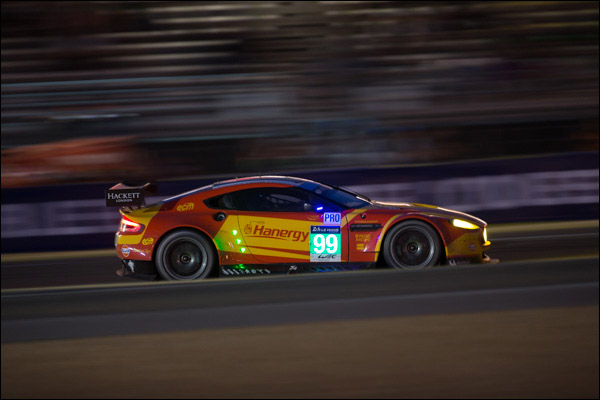 In GTE Am, the #72 Ferrari, #55 Ferrari and #53 Viper took the opportunity to pit behind the safery car initially, with the #66 JMW Ferrari also coming in from eighth as the clock counted down to eight hours down and 11pm with the safety car still circulating and barrier repairs underway at Mulsanne. Bergmeister finally relinquished the wheel of the #91 Porsche to Lietz, who left the garage after a brake-disc change under the safety car.