Four o’clock in the morning and ten of the surviving thirteen LMP1 cars continue to thunder round the track. The battle for the outright lead remains relentlessly close, with just seconds between the top three or four. Further back down the order, though, the story is a little different. Both Rebellions have hit problems, and while they’re running again, they’ve lost significant ground on the top eight. The #22 Nissan is back in the garage as well, and while the #4 ByKolles CLM is technically still a runner, as is the #23 Nissan, their positions just above the listing for the eight official retirements tells its own story.

Early into the fourteenth hour and Tréluyer pits the #7 from second place. Bamber’s  leads is roughly a minute over Tréluyer, the Audi is 90 seconds clear of Albuquerque in the #9, leaving Hartley in fourth 11 seconds further down the road.

Following Bamber’s next pitstop at four forty-five, though, the lead had narrowed to about 12 seconds. The #13 Rebellion was back into the garage at 04:48, and at 04:55 Tréluyer pitted again from second to extend Bamber’s lead by 50 seconds. 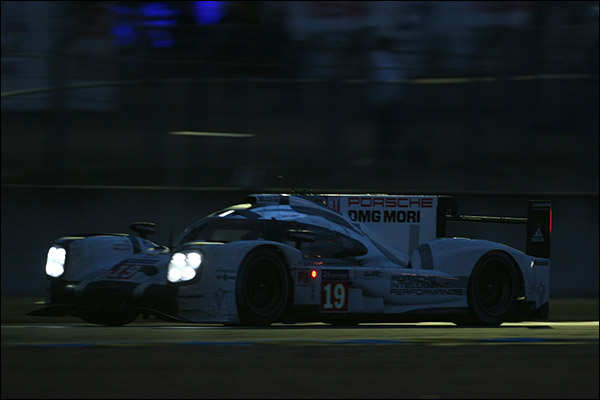 Audi and Porsche changed lead throughout the 15th hour of the race, continuing to trade fast laps which on average were quicker than last year’s pole time.

The fight up front continued, with only a minor delay during the #19’s 18th stop hindering progress; the car had to be repositioned in its pit box. After Earl Bamber rejoined the race he fell to second place, but only just. Benoit Treluyer held the lead, it was about two seconds. Bamber was able to match the pace of the Audi early on, taking a 50 second lead when Treluyer putted once again.

After troubled night stints, both Rebellions emerged for their respective garages, the #13 down in 16th and the #12 27th.

As we reached six o’clock, reports from up and down the paddock of rain began to get more frequent. If the rain was making an appearance, it wasn’t much more than mere moisture in the air.

Moving into the fourteenth hour, LMP2 had almost become a little predictable. The #47 KCMG Oreca had yet to miss a beat, and consistently quick lapping had ensured that the car’s advantage over whichever of two or three runners was occupying second place remained comfortable.

Pitstops for this leading group were routine and scheduled. The leader was back in at 04:16, with Lapierre handing over the #4 KCMG to Matt Howson. Other pitstops came for Strakka at 04:20, with Nick Leventis taking over driving duties, and then for Rusinov and the #26 from third at twenty-five past. He’d be criticised later for an ‘unsafe return to the track’.

Howson’s lead for KCMG stood at 54 seconds. At 04:43 Tristan Gommendy completed a routine pitstop for the #46, but hadn’t completed many more laps before the second-placed Thiriet by TDS Oreca took a thump from one of the GT Astons on the run through the first chicane. The Aston managed to straight-line the gravel-trap and continue at pace, but no such kind fortune for Gommendy, who ended up buried deeply in the gravel.

Stranded, the #46 was rapidly losing ground. The #26 was first to go by, followed by Berthon in the #48, and then Simon Dolan in the #38, who moved into fourth. 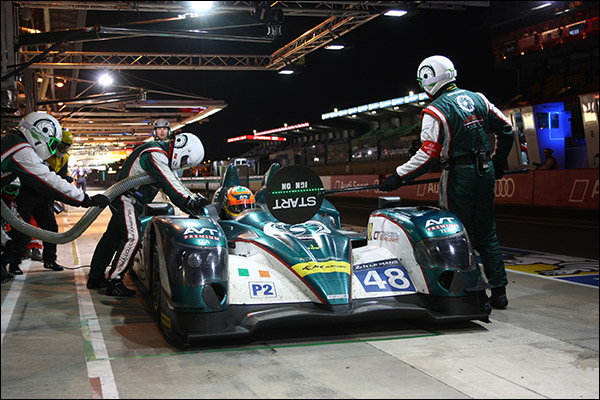 It was ten-past before Gommendy limped back to pits, having slumped to 8th in class (from second) and 17th overall. The fall would continue, though, and before this next hour was through, the #46 would have descended to 34th overall.

At 05:22 the #40 Krohn Ligier was awarded a stop-go for speeding in the pitlane, and five minutes on we saw pitstops for Chandhok (from third), Bird (second), and then the #34 Oak from 6th. Significantly, Simon Dolan was running just 42 seconds behind Murphy … and closing.

The biggest news from the hour was the retirement of the TDS Oreca, its crew hugging each other after accepting that the damage sustained from the contact with the #99 Aston Martin was too great to be repaired.

“We can’t fix the car,” said TDS’ Tristan Gommendy. “We came here to win the race, not just finish, it’s a lot of risk to restart now, the mechanics did an amazing job. It’s a pity to end like that.”

With 8:51 left Murphy came in for a fuel-only stop, the Irish squad continue to run consistently as its run for a podium place continues.

The battle for the lead in GTE PRO continued to rage on Milner was edging up to the back of Stanaway’s Aston Martin and got to within 2 seconds again with both cars following each other through traffic. 3rd in class Gianmaria Bruni was also on the same lap all be it 3 minutes back however he was running at the same pace as the leaders, laying in wait for and ready to pounce should one of the other two miss a beat.

In GTE AM Lauda continued to lead but with less time than a pitstop in hand over #72 SMP Ferrari. Further back Matt Griffin was strapped in to the #55 AF CORSE Ferrari and circulating rapidly. Beating the car’s best lap on three laps in a row.

In their next stop the #98 Aston Martin crew took the opportunity to change the brake discs. Strapping pedro Lamy in the car and only losing 2 minutes and sending Lamy out 55 seconds behind the SMP Ferrari.

Next for a brake disk change was the leading #99 car, Fernando Rees getting in the car and heading off in pursuit of Milner in the Corvette.

In his haste though Rees made a silly move up the inside of the Thiriet Oreca at the first Mulsanne chicane. The resulting contact causing major damage to the front left corner off the #99 Aston Martin and sent the Oreca spinning through the gravel (it would retire soon afterwards as a direct result of the damage).

As the Aston returned to the pits and was pushed back into the garage it came past the Corvette who was also receiving a brake change. The Corvette mechanics seemed to struggle over getting the pads off and the stop all in all took over 4 minutes. All in all meaning that in the space of ten minutes the #51 Ferrari with Bruni on board had gone from being 3rd and nearly a lap down to leading by over a minute.

All change at the front. Just as Aston Martin might have been forgiven for thinking they were in a position of stability, two serious incidents befell their entries. As the hour closed the #96 car was seen returning slowly to its pit following a spin, a transmission issue suspected.

The bigger incident though affected the second placed GTE Pro Aston, which having just changed its brake discs ran into the second placed LMP2 car. Fernando Rees got the #99 car back to its pit, where it was receiving repairs while dropping down to the bottom of GTE Pro running order, which was effectively sixth position.

Jordan Taylor at the helm, the #64 Corvette was pounding around steadily having resumed the lead after the latest round of pit stops. The #51 AF Corse Ferrari 458 had led briefly in the hands of Gianmaria Bruni, this car’s recovery overnight being typically robust having been over a minute and a half behind the class lead. The gap first to second was now just over two seconds, Bruni on a charge. Richard Lietz seemed comfortable in third, his rather isolated position a lap back having been the result of steady persistence for the remaining works 911 RSR. The car was circulating in the 3:58’s, this being an improvement of pace, and was ready to take advantage of anything happening ahead. 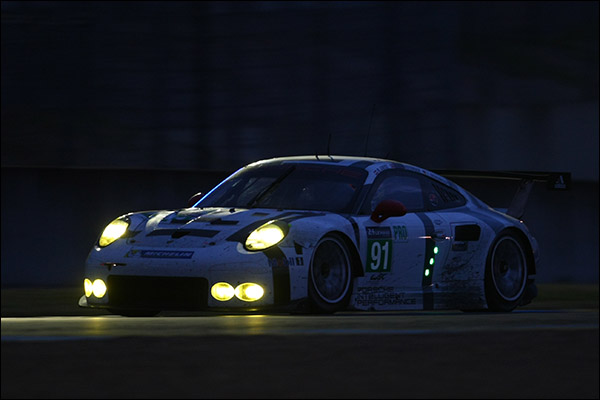 GTE Am had the #98 Aston Martin back in front, Pedro Lamy’s pace having overhauled the #72 SMP Ferrari that had enjoyed time at the front in the hands of Viktor Shaytar. With Basov now aboard its lap times had allowed Lamy to close in and retake the class lead which was now approaching half a minute.