With just five hours left to run at Le Mans, Porsche’s 1-2 stranglehold at the top continued. 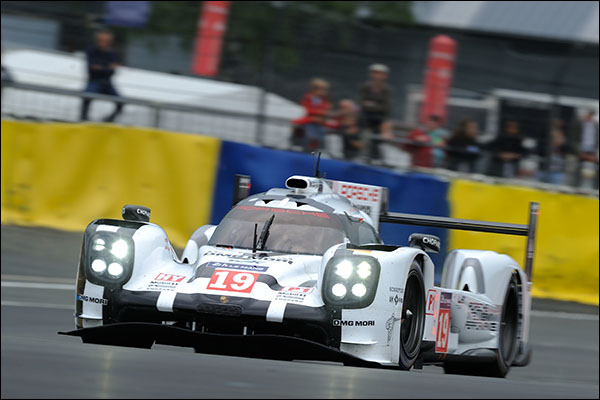 Hour 18 started with the #19 coming in for what looked like a regular stop, before being pushed back into the grange. The mechanics immediately taking the rear cover off and inspecting, before getting the car back out after just a minute.

Footage of the incident at Corvette Corner involving the leader and the #96 Aston Martin showed a small piece of debris which could have been from the rear of the Porsche, it seemed the #19’s mechanics may have had the same feelings, just checking the rear to ensure that any damage from contact was purely cosmetic.

At the restart Webber was still just behind the second placed #9 Audi of Rast and the pair fought their way through traffic. Almost immediately Webber slipped past Rast to make it a Porsche 1-2 at the front. Webber pulled away, and created a few seconds gap after just a couple of laps holding station.

Olivier Pla also left the garage in the #23 Nissan having spent over an hour in the pits for repairs. This meant both Nissans were still running after over 17 hours of racing.

The #19 and #7 came together under yellows in the midst of the 19th hour, with Fassler un-lapping himself as they passed through the slow zone for the stranded DOME. Replays showed Fassler getting alongside Tandy under yellows, with the #19 slowly edging the Audi towards the pit wall to prevent it getting the jump. Fassler did though, and was now just two laps off the lead.

Screens then cut to the #23 Nissan stopped at Arnage with Pla at the wheel, sitting behind the LMP2 leading KCMG Oreca which had also conked out. Pla did get it going though, and returned to the pits after firing it up again.

As the hour winded down the running order saw the #19 continuing to lead by over a lap, with the #17 Porsche holding second and the #9 Audi a minute back in third. Timo Bernhard in the #17 was continuing to up his pace, lapping in the 3:18 range at points. Fourth and fifth were still held by the #7 and #8 Audis respectively.

Status quo at the top end of LMP2 through the 18th and 19th hours. KCMG still lead despite a small hiccup.

At twenty past nine the screens cut to the Strakka Racing DOME, which had run reliably all race, sitting in seventh spot. The car along the pit straight had ground to a halt leaking fluid from the rear with Nick Leventis driving. The Krohn Racing Liger was also facing a barrier at the exit of Arnage.

After much trying, Leventis appeared unable to get the engine fired up again.  On the other hand, the Krohn car finally made its way back to the pitlane just as the track was declared clear again, and racing resumed.

Mechanics from Strakka were heading down to find Nick Leventis at Dunlop, and perhaps find some way they might instruct him in the finer points of getting the DOME running again. Nick had other ideas, and had already coaxed the car back out onto the circuit, and headed, slowly, down through the Esses. Gravity did its work, and he made it to the foot of the slope, but there wasn’t enough left in the Nissan engine to get the #42 up the shallow incline at the start of the Forest Esses. The black and white car staggered to a halt, once again, and started to roll backwards, small puffs of smoke from the back.

Meanwhile, at Arnage, there were two unrelated incidents, one involving the LMP2 leader, Bradley in the #47 KCMG Oreca and the other for Olivier Pla in the #23 Nissan GT-R LM. The two cars both went straight on, independently, at the right-hander. The Nissan backed out with smoke rising gently from the front-right, just hot brakes perhaps, and returned to the pitlane for attention. The #47 also regained the track, completed the lap, and Bradley elected to press on regardless, beginning another lap.

The slow zone persisted through Dunlop and the Esses while Nick Leventis and the Dome were recovered. The #42 was taken behind the barriers where Nick could, in theory, work on the car. He started the process of removing the engine cover – never easy working solo.

At 09:40 Mark Patterson completed his mid-stint pitstop in the #48. He stayed in the cockpit, but the stop cost the team fourth place, allowing Derani in the #28 G-Drive Ligier moved ahead.

KCMG’s lead had diminished to 85 seconds – still a significant margin – and for a while there were no obvious threats to position anywhere within the top ten in LMP2.

Looking further back through the field, there had been no further retirements in P2 since the demise of the #46 Thiriet by TDS Oreca around dawn, following contact with the #99 Aston. Running 23rd overall, Jacques Nicolet set a new fastest lap for the #35 at 09:53, posting a 3:47.718. The position translated into 11th in class.

Seven positions further back, Léo Roussel had just moved the Pegasus Racing Morgan ahead of the #77 GTE Am Porsche for 29th overall. Having disposed of the Porsche, he then took the #62 Ferrari on the run down into Mulsanne Corner at 09:57.

As the clock ticked over onto ten o’clock, a last flurry of pitstops, with the #47, the #28 and the #27 all electing to make pitstops in the dying moments of the nineteenth hour. The stop for Derani in the G-Drive Ligier was enough to allow Mark Patterson back through to fourth, and this change effectively rounded off the hour, with the positions in LMP2 standing at:

The battle at the front of GTE Pro was the main story as the 18th hour closed. Following the release of the field after the earlier safety car period, the #51 Ferrari and #64 Corvette had been close for the lead. While the second placed Corvette had come in for its routine stop the Ferrari with Vilander aboard came in for what was expected to be fuel only stop but ended up dealing with a puncture.

The pair left their pit together and there was a race down pit lane on the limiter that was won – just – by Tommy Milner in the ‘Vette. Nose to tail the pair circulated, Vilander pressuring Milner until the #64 car assumed a degree of control and began to edge away.

In GTE Am, a further casualty: the #55 AF Corse car with Alex Mortimer aboard was seen weaving slowly, pulling up at Arnage out of fuel.

Into the nineteenth hour, third place in Am was a shoot-out between Jeff Segal’s #62 Ferrari and Marco Seefried’s #77 Proton Porsche. Segal took Seefried on the road, the Porsche driver fighting back without success. Segal’s pace was impressive at this point, putting in personal best sectors for the car in its challenge to unlap itself.

The #55 AF Corse Ferrari was confirmed as a retirement.