Finding anywhere peaceful during race week at Le Mans can be a challenge, which is why many teams from the 1950s to 1970 were based out of the Hôtel de France, 26 miles south-east of the circuit. This year’s race marked the 40th anniversary of the Gulf Research Racing Team’s historic win, so to celebrate it, Derek Bell and the winning Gulf Mirage GR8 were reunited at the historic hotel which they occupied during the event.

On the big day DSC were lucky enough to be invited for lunch and a chat with Derek about the car, the hotel and his first win. 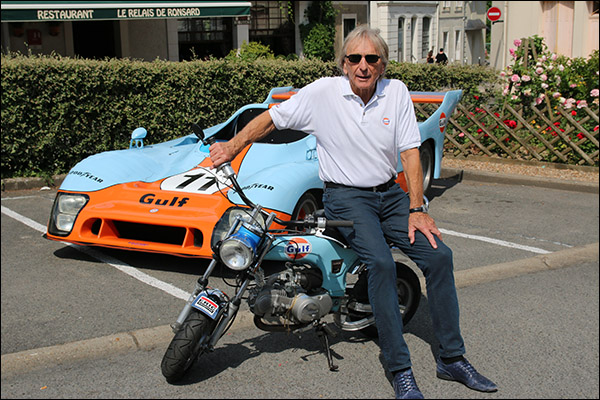 Aston Martin Racing, TVR and Ford are just a few of the big factory teams that utilised the hotel back in the day. Located in the centre of a rather secluded town – La Chartre sur-Le-Loir – anything and everything from Porsche 917s to Ford GT40s were prepared, stored and driven to the circuit from the garages either side of the building. It set the scene for reflecting on a year which saw a race at Le Mans, that because of a worldwide fuel crisis, provided a swan-song for an oil company pulling out of the sport. 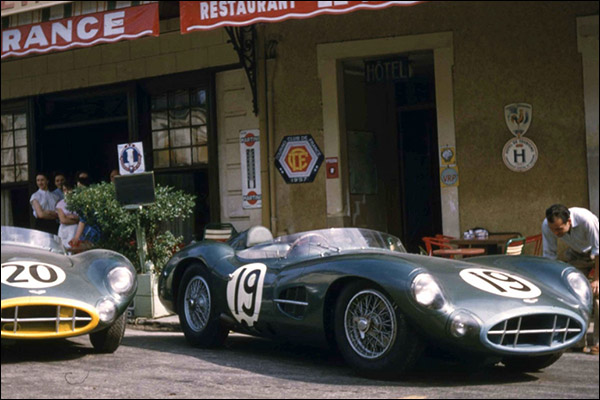 The allure of the hotel was that it served as a temporary abode away from the fans, with fine dining and comfortable rooms. It’s not an extravagant hotel which oozes affluence, instead it feels rather homely. It’s an old hotel rich in character, that’s played host to many a rich character over the course of its history. Derek and his family who often came along for the ride back when his teams stayed there have so many fond memories. That was made clear when he and his son – Justin Bell – stood up to speak to the small group in attendance for the lunch.

“The Hotel hasn’t changed much. The curtains are improved, but it looks very similar, it’s still stunning.” Chuckled Bell.

“I remember this place fondly. Lots of my memories from staying here are of the drinking. I mean, my cousins would come along, my family would be here, and anyone old enough would drink for their country during race week. I was in bed one night and heard everyone on their hands and knees downstairs singing ‘Hi ho, hi ho, off to Le Mans we go!’ trawling through the restaurant. This was back when men were men, and we’d spend 12 hours each driving the cars so on the Friday, naturally, I wanted some sleep. 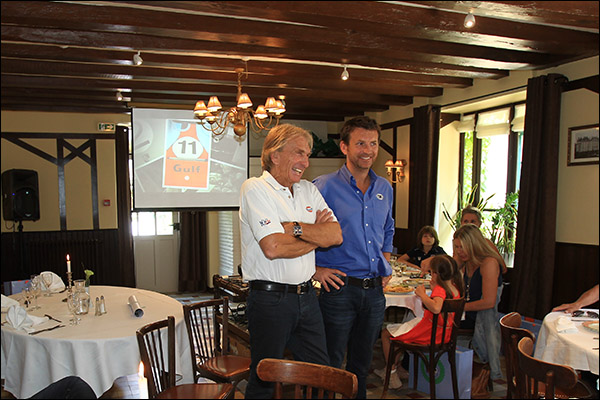 “One year, I was trying to get sleep before raceday, and I heard this snoring, I opened my room and one of my cousins was just laying on the floor outside my room sleeping. But that’s what made it special, the atmosphere was different to staying anywhere else at Le Mans.”

The 1975 Le Mans 24 Hours was a race which is often looked back on as the start of a new chapter for sportscars. The 1973 oil crisis resulted in the removal of the big race on the 1975 World Sportscar Championship calendar by the CSI (Commission Sportive Internationale de la FIA) due to new rules regarding fuel consumption. From that point onwards cars had to go at least 20 laps between fuel stops and had regulated tanks. The cars ran with reduced power and the teams were focused on getting the most out of their fuel.

It changed the shape of that race in question, and helped create a mould which would run through to the Group-C era. It also meant the winning Gulf GR8 Mirage (#802) only competed once that year, and despite that was able to claim victory in what would be one final drive at Le Mans for a Gulf-badged sportscar. 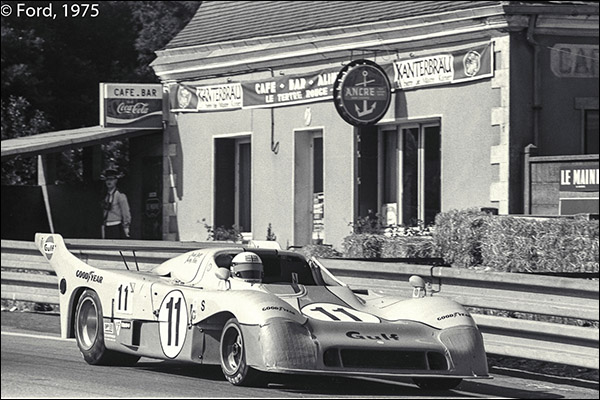 What’s interesting about Bell’s win in 1975 was that it might never have happened had his ties with Ferrari continued throughout the decade. Bell tested with the John Wyer’s Gulf squad at Thruxton in the late 60s and was offered a drive. But before he could sign a contract he was sent a memo from the Italian manufacturer which served as a reminder of who he was already contracted with, and what their thoughts on Ford were.

Nevertheless, Bell started driving for Wyer in 1971 and his sportscar career took off, culminating in his first win at La Sarthe. That race was his only appearance with Gulf in 1975, and despite being part of the development of the car, he still had learning to do as it was the first time he and Jacky Ickx had shared a car together. It was a lineup which now would be considered a dream team. The fantasy aspect was that they turned up, they raced, they won, and never drove the car together again.

“Jacky wrote a letter to John and asked for a drive,” explained Bell. “He was possibly the most versatile racing driver ever, he’d just hop around from team to team and win. To have Jacky want to join me in the #11 for the race, was an honour. He arrived at Le Mans having never driven the car before, and he just got on with it really. It’s funny, people often ask me what we said to each other that weekend, but the answer is not a lot. He got out of the car, and I climbed in. We didn’t get a chance to speak properly until after the race.”

Amazingly outside the Hotel de France this year was the first time he’d sat in the car since crossing the line on the Sunday of the race before stepping onto the podium. 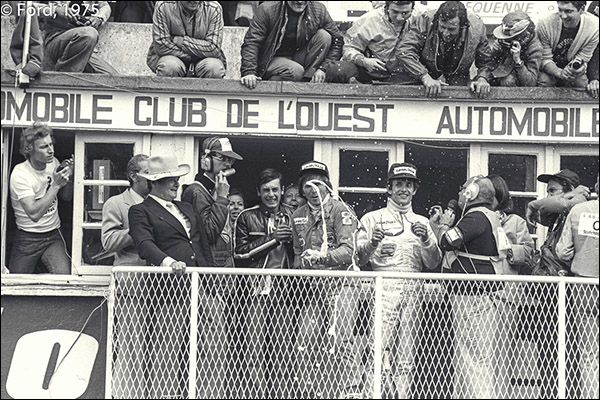 “It’s amazing to get in it again, because the funny thing is I just felt at home. The last time I got out of it, I was very pleased to get out, because I’d just won Le Mans. But you look at it, and you think ‘did I really drive that for 12 hours?’ it doesn’t look very comfortable does it?” he laughed.

“Just looking at it, it reminds me that the screen on the front was really important as far as preventing a draft getting into the cockpit. Without it you’d have spent the whole time with your head getting almost ripped off from the wind. We had to sit down lower and really play with that little screen. It didn’t help poor Jacky, who is a bit smaller than me, because it meant when he got in it, he couldn’t see. They had to put padding in to raise him up!

“As a car to drive, it was small and light, it didn’t have much ground effect so it didn’t stick to the road, making it less physical. The wheels were small too and the tyres didn’t have much grip. It was a Grand Prix car with more bodywork; it looks heavy, but it really wasn’t too tough to drive. The fact that we could throw it around for 12 hours each says it all.”

Towards the rear of the GR8 was a Ford Cosworth 3-litre V8 engine, which wasn’t originally designed for long races. Both Gulf cars hit trouble that weekend, with the sister #10 entry of Vern Schuppan and Jean-Pierre Jaussaud finishing six laps back from Bell and Ickx in third place after its own gremlins.

“It was a Grand Prix engine, which was so versatile; it was light, small, powerful. That engine won Grands Prix, won the Indy 500, all sorts, but it was built for an hour 40 minute race, so there was always a worry it wouldn’t make it to the end.

“The Ligier which finished second was a good car, but we were favourites going in. We won because everyone else suffered their own issues as well as us; towards the end of the race I remember thinking that the car seemed ready to give up. We didn’t even know what the extent of the issues were really, there were troubles with the exhaust, the suspension, that sort of thing.” 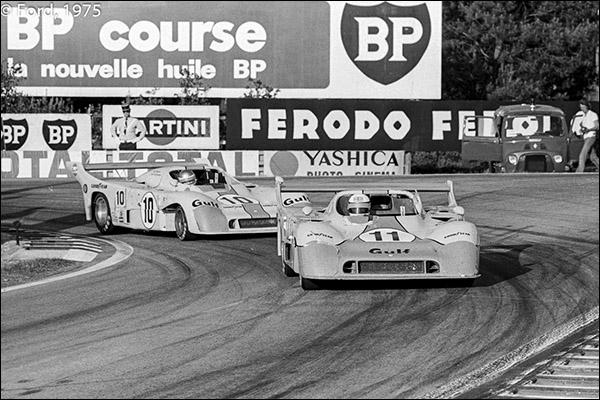 As it turned out, the exhaust pipe issues which hindered the winning Mirage also struck the challenging Ligier. And that was how the race was won.

To this day Bell is still the most successful British driver at Le Mans, having won the race a further four times with Porsche after ’75. He didn’t win it in a Wyer-run car again, but memories of racing for him and the lessons learnt were invaluable as he progressed.

“The thing about John is that the way he went about his business and the way he treated people was just different,” Bell relfected. “He was like a school headmaster in his demeanour, and it worked. I mean, I’ve never seen anyone record data like him. He recorded everything in a book extensively, and it helped massively throughout my time with him because there was always something to refer back to and learn from.

“Christ,” he concluded. “I’ve driven for Formula One teams that practically scribbled lap times on the back of a fag packet. So yeah, that win was special, and I knew it at the time.”