Round 3 of the 2015 SUPER GT championship saw the the sole foray out of Japan for the season. Thailand once again putting on a show at the Buriram circuit.

Qualifying belonged to Lexus in GT500. They locked out the front row with the #38 Zent Cerumo car on pole and the #36 Petronas car along side in 2nd. All four other Lexus GT500 cars also managed to qualify in the top 10. Nissan on the other hand had a very disappointing qualifying. Only the #46 S Road Mola car making it into the top 10. Honda Filled the further 3 spots in the top 10 in what was a very good showing from the Hondas.

Race day came and the field was greeted with blisteringly hot weather meaning it was sure to be a tough and draining afternoon for all. As the lights went green the field pulled away in much the same order as they found themselves on the grid. The #38 Zent Cerumo Lexus of Tachikawa showing a good pace early on as he began to build a visible buffer at the front. Behind him though the early battle was between Rossiter in the #36 Lexus and a hard charging Motoyama in the #46 Nissan. After a handful of laps with Rossiter defending every corner Motoyama finally found a way past and set off in pursuit of Tachikawa in the lead. 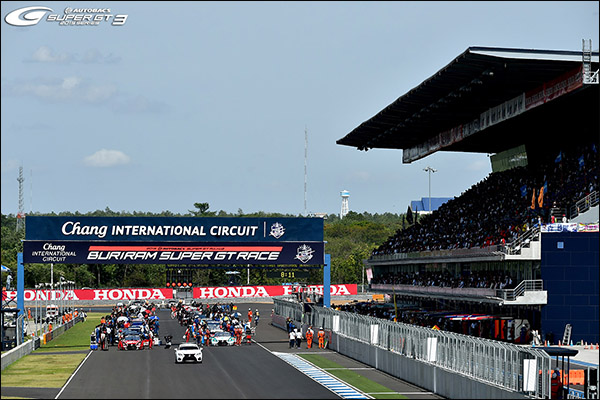 Having seen Motoyama find a way by and with Rossiter struggling to get the car hooked up Bertrand Baguette in the #64 Honda set about finding a way by too. It was to end in tears though. Baguette went for a gap that was never quite there and when Rossiter turned in they clashed. Rossiter continued relatively unscathed but Baguette spun and the delay removed him as a contender for the podium.

As the cars headed toward the pit stop window Motoyama had made light work of the Lexus’ lead and was nose to tail heading down to the 2nd corner. Motoyama had a go up the inside of the hairpin but had overcooked it and went wide handing the lead back immediately. He didn’t have to wait long for another chance when he pounced as Tachikawa was held up by a GT300 car and Motoyama made no mistake this time.

As the two leaders emerged from their pitstops their battle continued. Within 5 seconds of each other and swapping quick lap times. However the hopes of a race to the wire were dashed when the #38 Lexus now in the hands of Ishiura came to a stop out on the circuit with what later turned out to be brake problems.

The Petronas #36 Lexus had gone with a similar strategy to the one that had worked so well for it last year at this circuit and did not change tyres at the pitstop. However any hope that this would prove to be the right decision was soon lost as a string of cars took aim and despatched the Lexus with ease as they just had more pace with their new rubber.

So as the #46 Nissan of Motoyama and Yanagida crossed the line to take the win it was joined on the podium by both other manufacturers. 2nd and 7 seconds back was the #6 Lexus of Oshima and Kunimoto. and rounding out the top three was the #17 Honda of Tsukakoshi and Mutoh. 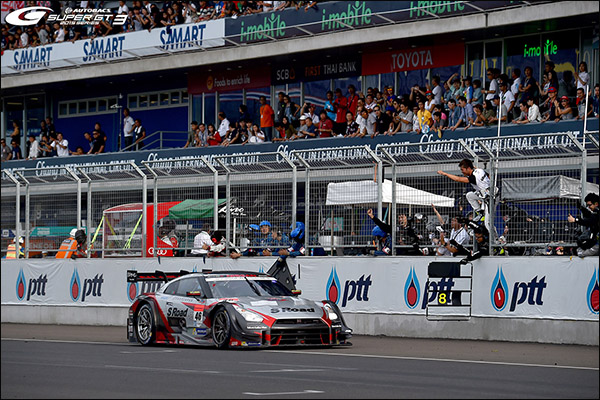 Once again in Thailand the strength in depth of the GT300 grid shone through. 7 different chassis filled the top ten in qualifying and they were headed by a first pole position for one of the new “mother chassis” cars, this being one of the cars that had chosen the body of a Toyota GT86. Alongside on the front row was the #3 Nissan GT-R. Rounding out the top five were the #10 Nissan GT-R, the #65 Mercedes SLS and the first of the Japanese hybrid cars the #31 Prius.

Right from the off it became apparent that the Nissan GT-R was going to be the car to have during the race. Through the first few corners both the #3 and #10 Nissans were all over the back of the GT86 up top. Tsuchiya in the GT86 was defending admirably but had no answer to the Nissans on the straights. Kabuki Hoshino in the #3 car got past first and set about building a lead. He had built a few seconds over the pack by the time the 2nd GT-R had got by the GT86.

The leading Nissan of Hoshino seemed to have about a second a lap over the rest of the GT300 field with Hoshino putting quick laps lap after lap. By the time the cars got to the pit stops the lead was nearing 15 seconds.

With the cushion up front and from 2nd to 3rd looking unassailable the heated battle was on for the final podium spot. The GT86 that had taken pole was no under pressure from Jorg Muller in the #7 BMW Z4. The cars ran nose to tail for some time until Muller made his way by. Matsui in the GT86 was not done yet though and stuck to the back of the BMW like glue. But then there was heartbreak The GT86 had pulled in to the pits with an apparent fuel issue, the car struggling as if it was running out of fuel when it had plenty. The delay cost the team and saw them end up in a deeply disappointing 7th at the flag.

So the race win went to the #3 B-MAX NDDP Nissan GT-R in the hands of Hoshino and Takaboshi. The blistering pace in the first half of the race from Hoshino was spectacular to watch and Takaboshi did well in the 2nd half to make it clear to the rest of the field had no chance of catching him, all the while bringing the car home safely. 2nd was another great drive from the #10 Nissan crew of Couto and Tomita. Following up in a slightly distant 3rd was the #7 BMW of Muller and Ara. 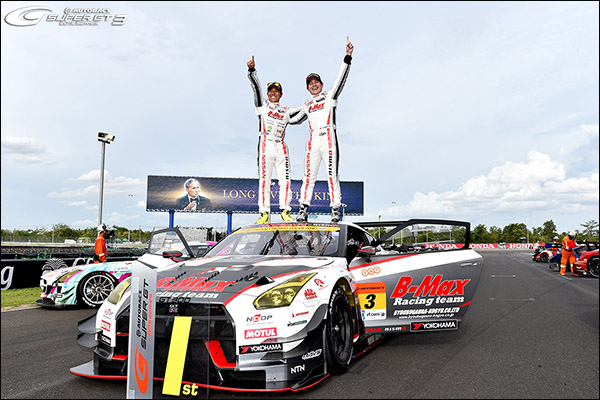 So with round three over the season is well underway and in GT500 it looks like anyone has a chance of the title this year. Honda have stepped up their game and will be hoping for their 1st win of the season soon. Lexus already have one win but will feel that they need to be converting good qualifying pace into wins. Nissan though seem to just have the edge at the moment. Two wins on the trot all be it with two different cars. One fact rings out from the first three races though in terms of how tight the field are, nobody has been on the podium more than once. So in three races we have had 9 different teams on the podium.

In GT300 the Nissan GT-Rs are looking mighty two 1-2s in a row certainly makes the chassis the favourite for the title at this stage but there are at least ten other cars in the field which on their day can challenge for the win.

Next up is Fuji on the 8th and 9th of August.