Lime Rock Park in northwestern Connecticut welcomed the Tudor United SportsCar Championship with dry and warm conditions on race day. The 2 hour and 40 minute event featured only 17 cars, but produced a full measure of drama and excitement. 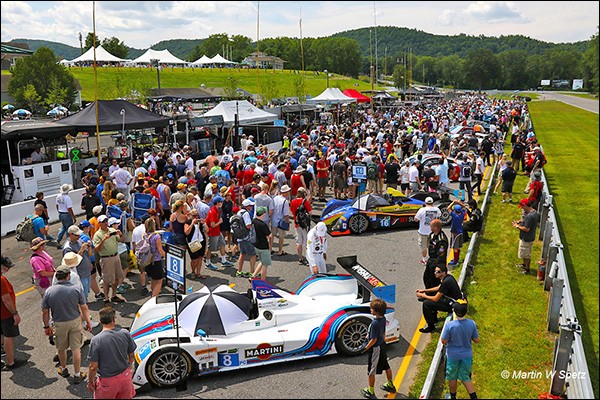 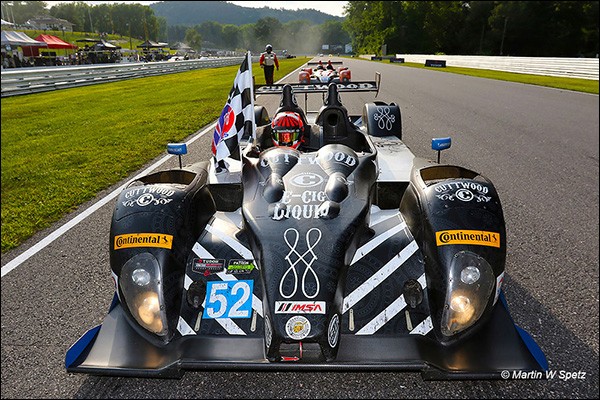 Dane Cameron and Michael Marsal took GTD honors in the Turner Motorsport BWM Z4 with an amazing recovery run on fuel mileage. Cameron, who had won a championship with Turner in 2014, was sitting in for the team’s regular driver who was otherwise occupied navigating the rain at the Spa 24. Team Turner team overcame a major crash in first practice, missed practice and qualifying, started from the back of the grid, and had an early off course excursion courtesy of a PC car. 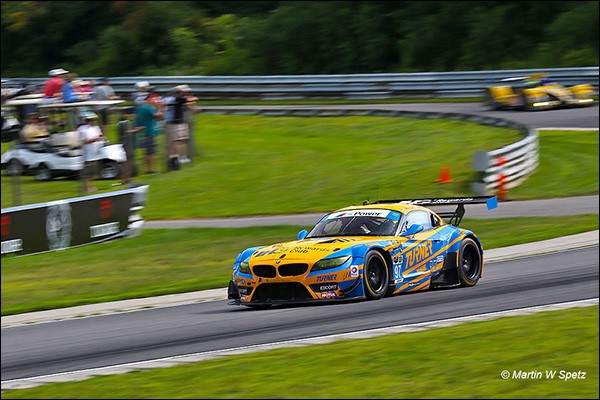 Ben Keating and Jeroen Bleekemolen brought their Viper home in second with Kuno Wittmer and Christina Nielsen in the TRG Aston Martin in third. 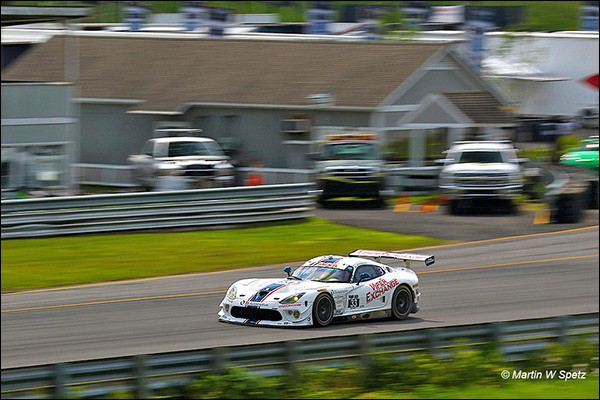 The major talking point of the day emerged half way through the race when the two class leaders at the time had a dispute over real estate in the fast downhill right turn that leads onto the front stretch. The incident materially changed the course of the race and resulted in the only two retirements of the day.

After a crash during first practice on Friday morning that caused major rear-end damage, the Turner crew faced an enormous about of work to rebuild the car. They went to a body shop off-site and spent six hours on a jig straightening the car enough to race. Once that was done, the crew worked until 3am to effect repairs. Proof of their efforts came when the car set fast GTD lap in the hands of Dane Cameron in morning warm-up. There was likely some parts under the skin that weren’t pretty, but they had a car with which to race.

When the green flag flew, pole sitters Stephen Simpson in the #85 JDC/Miller Motorsports car and Dion von Moltke in the #48 Paul Miller Audi leapt out to early leads. Simpson was clearly the fastest of the PC drivers, as the other teams had elected to start their amateur drivers and hold their professional drivers until later. Simpson needed to build up enough of a lead to be able to turn over the car with a defendable cushion. 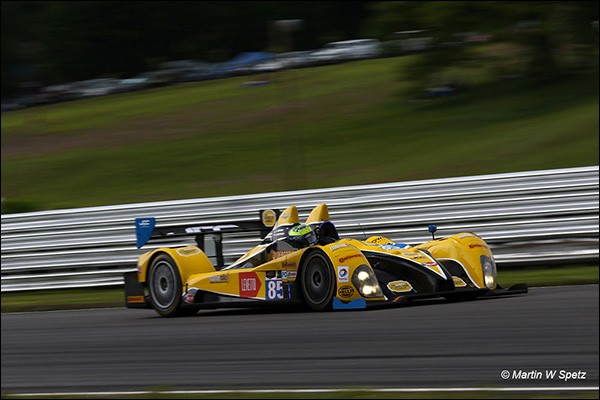 Simpson was the first car below the 49 second threshold and used the clean track to quickly build a lead of about a second a lap, but the GTD battle was measured in tenths. Patrick Lindsey in the Porsche got alongside Ben Keating in the Viper in west bend and the two ran side-by-side through the downhill turn before Keating used the preferred line to reclaim his position. The dicing gave von Moltke a bit of extra space, but Keating closed back in after a few laps.

The faster PC cars started to lap into the GTD field after only 7 laps. Behind Simpson, Mike Guasch in the #52 and Jon Bennett in the #54 had a close dice over fourth and fifth positions. During the scrap, Bennett gave Michael Marsal in the Turner BMW Z4 a push into the dirt in the esses. Marsal continued with no apparent damage other than losing track position.

Similarly, Mirco Schultis in the #8 and Ben Keating in the Viper had a meeting which put the Viper briefly into the dirt and cost it a position, but Keating was able to stay in front of a charging Christina Nielsen in her TRG Aston Martin. 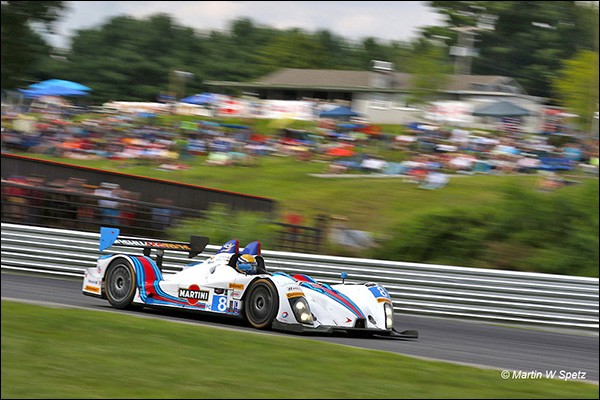 The race settled down after about 15 minutes as cars spaced around the track. The PC cars were working their way through the GTD traffic which made the stopwatch ebb and flow. Lindsey pulled himself up to Dion von Moltke’s rear bumper keeping the GTD class close while Simson was busy putting in fast lap after fast lap, eventually leaving only four PC cars on the lead lap. Lime Rock is a short course at just under 1.5 miles, so laps can be lost quickly.

The PC gap further opened as James French in the #38 and Chris Cummings in the #11 were held up behind Todd Slusher in the #16 after about 40 minutes running. French took six laps to get past, costing about a second a lap. Cummings took a few laps more and paid with similar time gaps. Mike Guasch in the #52 circulated in fourth, but trying to be consistent rather than push for ultimate speed. This all allowed Simpson to pull further away at the front. Interestingly, Conor Daly while waiting his turn to take over for co-driver James French, told Greg Creamer on IMSA Radio that they set up the #38 with less downforce to give more speed and help make passing easier. French was showing good pace on track while Daly was speaking, but Daly’s priority on being able to make passes would be prescient.

Simpson pitted after 55 minutes with 42 seconds of a lead. He was the first PC car to pit, presumably using more fuel with a faster race pace. He refueled and rejoined the race with fresh tires in third and lost a further position to the #52 as his tires warmed up.

After just over an hour of running, Stephen Simpson’s progress came to a halt in the esses bringing out the first full course yellow. The car was towed to the paddock where the team discovered that a circuit breaker in the fuel pump had somehow been tripped. Once reset, Simpson returned to the track before the yellow period had ended but now 5 laps down. Sadly, an interesting story line vanished with the naughty circuit breaker. 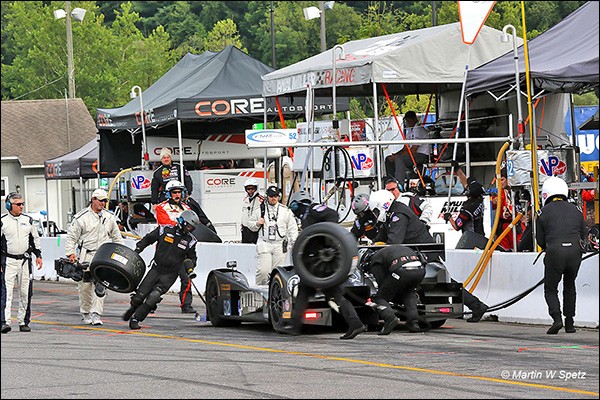 Townsend Bell in the #63 Ferrari and Andy Lally in the #44 Porsche found each other on the downhill bend before the restart. The meeting removed the driver’s side door of the Ferrari and flattened the Porsche’s front right wheel. Lally quickly pitted to get a new wheel and Bell circulated for a few laps giving spectators a good look at a Ferrari pilot in action. The Ferrari eventually pitted for a new door, but it took a few laps given the damage to the hinges and door latch.

The pace was furious after the restart. Unfortunately, after barely a dozen minutes of green flag running, the second full course caution was caused when Conor Daly in the #38 PC car and Christopher Haase in the #38 Audi got together in the downhill turn leading to the front stretch. Renger van der Zande had decisively passed Haase on the downhill and Daly tried to follow in the #38. Contact between Daly’s left rear and Haase’s front right ensued at the worst possible place in the middle of the fastest corner of the track. At the time, both were leading their class and they both ended their day in a pile among the tire barriers to the outside of the corner. Both were uninjured. The impact significantly re-arranged the tires which took some time for the safety crew to fix.

Christopher Haase later told Greg Creamer on IMSA Radio “I still don’t know what happened actually. I just tried to manage by corner and suddenly the PC car hit me and put me into the barriers.” Haase’s view clearly was that he had given all the room he could give and needed to turn to make the corner at some point.

Unsurprisingly, Daly’s view was a bit different. He told IMSA radio “It’s a shame. We were having a great run. I was leading class. He blocked me the corner before which let Renger get by, but he hit my left rear which means I was mostly by.”

The good news for van der Zande was that he made up a lap in the exchange to run behind Colin Braun in the #54. At this point, Junqueira and Kimber-Smith ran as the only cars on the lead lap leaving Braun and van der Zande to dispute third in PC. 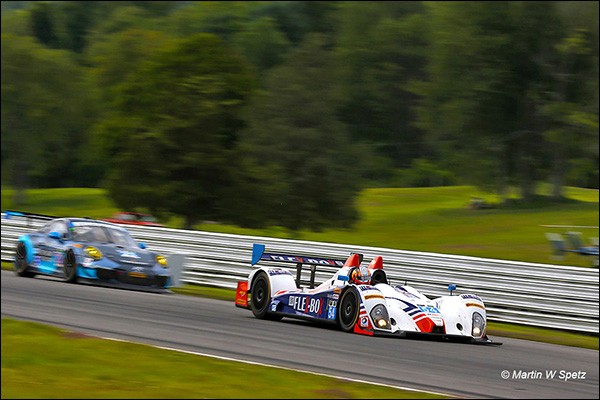 More strategy cards were played when the green flag waved with just under an hour to go. Several GTD cars made late pit stops just after the green flag flew so they could run to the flag. The flurry put Dane Cameron up to second in GTD five seconds behind Bleekemolen in the Viper. The Viper team then pitted and emerged in second place in class behind Cameron, who was stretching mileage to avoid making another stop altogether.

The PC battle really heated up as several cars set their fast laps for the race. The end was in sight, strategy cards had been played, and tires were fresh. Kimber-Smith sliced down the inside of Junqueira to take the lead with 35 minutes to go amidst a gaggle of traffic. Junquiera pitted two laps later and Kimber-Smith shortly after, topping off with fuel and changing left side tires only. Kimber-Smith came out just in front of Junquiera and was able to stay in there, both of them setting their fast lap times for the race. Kimber-Smith headed for the checkered flag at this point, building a lead of several seconds by gradually adding a few tenths here and there.

Meanwhile, Cameron’s economy run in the BMW continued with a 20 second lap over Bleekemolen in the Viper that was slowly closing. Mario Farnbacher gave up third to Wittmer in the Aston Martin after running wide in big bend which also allowed Lally to catch up and put pressure on him to contest for fourth. Lally would come up short after being pushed off the track just before no-name straight by Mikhail Goldberg. Lally kept his foot planted and avoided a crash, but created an enormous dust cloud. Goikhberg earned an avoidable contact penalty for his role. 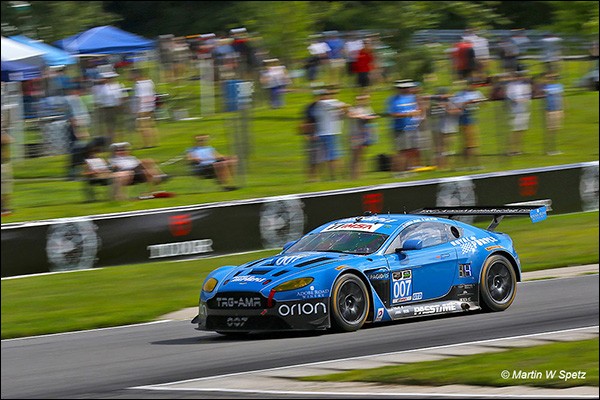 With 16 minutes to go, the Turner crew told Cameron that Bleekemolen was faster, but that Cameron had enough fuel without needing to pit. Sure enough, Cameron took the checkers with under 4 seconds to spare.

Cameron’s co-driver Marsal was relieved and ecstatic, characterizing the run as “Unbelievable. Triumph over adversity here.” Cameron had managed to go for 95 laps and over 95 minutes of running without a pit stop to claim top honors. It would have been an impressive effort even without the heroics to get a damaged car to the starting line.

Cameron acknowledged “That one stint was more stressful than all of the races last year to win the championship.” “We were running mappings that we had never really run to see what it could save. I was also trying to try and lift the pedal as much as I could.” He hadn’t driven a GTD car since Petit LeMans in 2014 and the win was the first GTD win for co-driver Michael Marsal as Lime Rock is his home track. 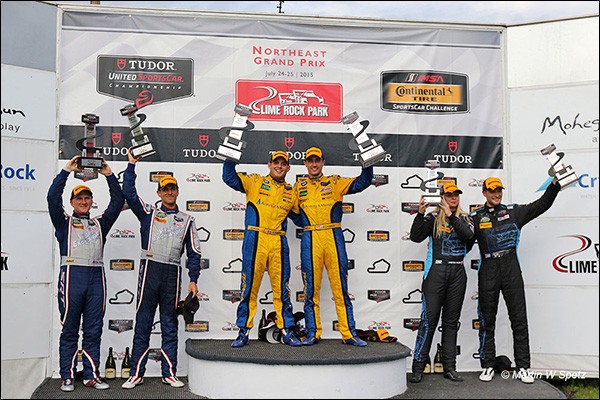 The Viper team of Keating and Bleekemolen took second and Wittmer and Nielsen claimed third in their Aston Martin. The victory for PR1/Mathiasen is their third of the year. Tom Kimber-Smith said “We’ve had a lot of back luck recently and we definitely needed this.” He continued “The key here was just to look after your tires and that’s what we did.” The black #52 had a near-miss with 15 minutes to go, bouncing off of the #76 Compass360 Audi in turn one. Junquiera and Cummings finished second for RSR and CORE autosport scored a third in the hands of Braun and Bennett, one lap down.

The strong result for PR1/Mathiasen moved them to within a handful of points behind CORE autosport for the season tally. RSR’s second place brings them even with Starworks.
In GTD, Paul Miller Racing’s retirement trimmed their lead. TRG Aston Martin moves into second place with the #22 Alex Job Porsche in third.

The Tudor United Sportscar Championship will re-unite all four classes when it runs next in 2 weeks at Road America in Wisconsin.