As the majority of the World Endurance Championship contenders spent time testing at the Nurburgring earlier this week, Nissan opted for a two-day run at Circuit of The Americas to make its first post-Le Mans outing with its LMP1 prototype. 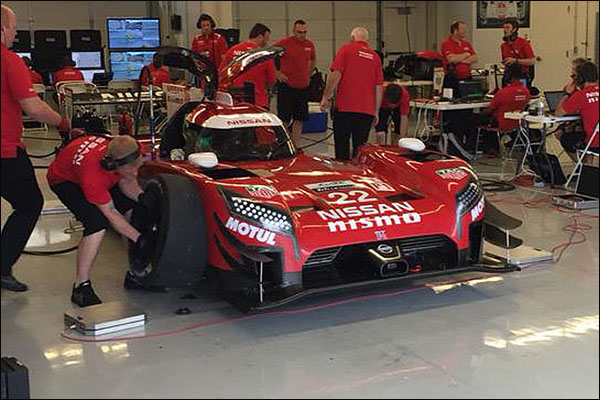 Based on the LMP1-H pole lap set by Toyota Racing for the 6 Hours of Circuit of The Americas in 2014, it would put Nissan approximately 10 seconds off of the TS040’s 1m49sec tour of 3.4-mile course set in much cooler, overcast conditions. Qualifying for the “Lone Star Le Mans” event last September was done with track temperatures in the 90 degree F range while this week’s running is said to have been over 120.

The lap would also put the GT-R LM NISMO within five seconds of the LMP1-Light pole time of 1m54.6sec posted by Rebellion Racing’s R-ONE-Toyota, which is a closer comparison for the ERS-free Nissan.

On the longer 8.5-mile Le Mans circuit, Nissan’s gap to the LMP1-H pole during Thursday’s final session was 16.0 seconds, and 8.9 seconds to the fastest LMP1-L car.

General impressions for the test were mixed as a significant volume of new items were tried. The most encouraging news coming out of COTA for Nissan could be with the revised suspension geometry and FRIC system that allowed Pla and Tincknell to make use of the curbing throughout the 20-turn facility.

The inability to use curbing at Le Mans was a significant contributor to the cars’ lack of pace.

Without an ERS system, the GT-R LM NISMOs will struggle to keep pace with the other LMP1-H entries, but if the team can continue making progress in cornering and its high-downforce package, a more promising 2016 could await the program.