With apologies for delayed posting

Round 3 and races 5 and 6 of the 2015 GT Asia series saw the competitors remain in Japan following the previous round at Okayama, this time they would be getting to grips with the twists and turns of Fuji International Speedway.

Another solid grid of 24 cars was on offer with no fewer than 8 different GT3 marques represented.

Qualifying for race 1 was heavily effected by the weather. Just before the start of the session the heavens opened and with a short 15 minute session most drivers attempted to get an early time on dry weather tyres. By the time it became apparent that this was futile and the wet weather tyre was the right call most drivers only had enough time for one quick lap. With the weather worsening by the minute it was experience that shone through. Toni Vilander putting the #1 Clearwater Ferrari on pole. Just behind was Carlo Van Dam in the #11 Singha Motorsport Ferrari and rounding out the top 3 was Richard Lyons in the #88 Craft Bamboo Aston Martin. 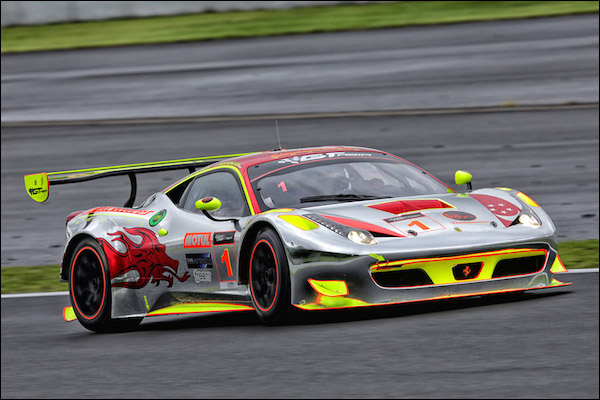 The start of race 1 had been a tense affair even before the lights went green. Intermittent rain in the hour before the race had left doubt in the minds of many of the teams as to which tyres to start on. Most went with slicks. One exception though was Matt Griffin in the #12 Clearwater racing Ferrari. He opted to go for wets but in realising his mistake on the first warm up lap he pitted to change back to slicks, meaning he would have to start from the pits.

It was a decision that didn’t end up being as disastrous as first appeared as it kept Griffin away from the carnage of the first couple of laps. Lyons made a great start and looked set to challenge the two front row Ferraris going in to the first corner. Lyons though with his extensive knowledge of the Fuji circuit and the testing conditions it often offers braked early. Andy Soucek though in the #7 Bentley didn’t read the script and went for a brave/ill advised move up the inside of the Aston Martin. 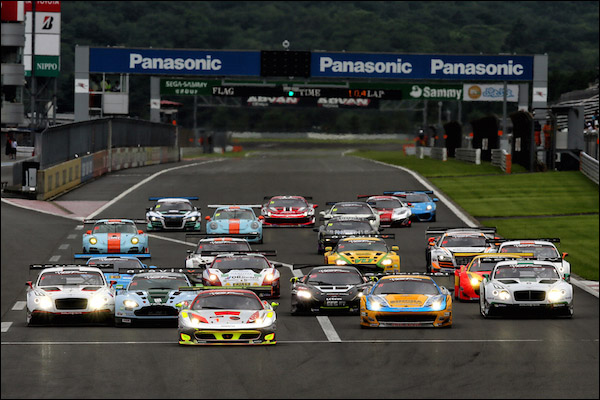 The cars collided and though neither driver was aware until the following corner the contact had given them both a puncture. Keith Sawa watching all this in front of him moved his #8 Bentley up alongside Lyons and Soucek and attempted to take them around the outside of turn three. Lyons though unaware of his puncture understeered into the side of Sawa forcing Sawa off the circuit. The domino effect of the first corner incident wasn’t over yet though. In his haste to rejoin Sawa was a little over eager and clipped the #9 Spirit of Race Ferrari of Max Wiser. The contact ended Wiser’s race on the spot with rear suspension damage and a 30 second penalty for Sawa after the race denied him a top ten finish.

So with Lyons, Sawa and Soucek all limping back to the pits with punctures and Wiser out of the race the two leaders had managed to force a comfortable lead. A few seconds behind was the McLaren of Antonio Liuzzi with the Bentley of Duncan Tappy pushing him hard for 3rd position. The opening stint saw the rain return and with it gradually getting heavier it was taking every inch of skill to keep the cars on the straight and narrow. One car that seemed to be enjoying the tricky conditions though was the sole Nissan GT-R in the very capable hands of Andre Couto, before the pit stops he had managed to get the GT-R unto 3rd from 13th on the grid.

The tricky conditions were highlighted by a rare mistake from GTE world champion Vilander. He ran deep into a slower corner allowing Van Dam past just before the pit stops.

With the stops out of the way it didn’t take long for the #7 Bentley to cause further controversy this time in the hands of Jeffrey Lee. He got a little too close for comfort to Kota Sasaki’s Lamborghini tapping the Italian car into a spin.

Up front though the #11 Thai Ferrari now in the hands of Piti was coming under increasing pressure from Mok Weng Sun. Mok appeared to have the pace to pass but in the tricky conditions and off the back off the fire that saw him score no points at the last round he appeared to settle for a safe 2nd. 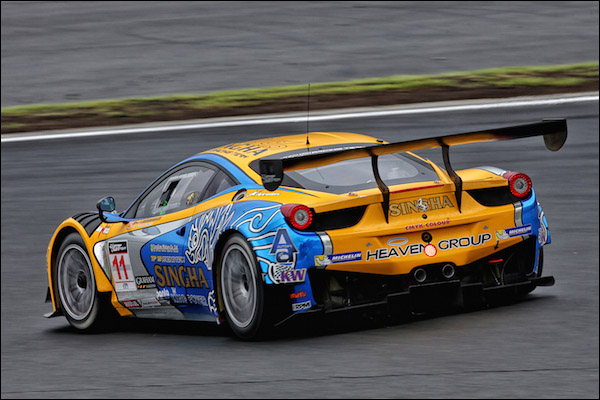 That left Piti to take the chequered flag for a well deserved win that had been set up by a great drive from Van Dam who had forced the error from Vilander. The #1 Ferrari of Mok and Vilander came home a comfortable 2nd but it was the 3rd podium spot that earned drive of the race for Richie Wee. The #12 Clearwater Ferrari had started in the pit lane in the hands of Matt Griffin who had done a good job to get the car back in contention but it was Lee who took the two late scalps of Jacky Yeung and Hiroshi Yamaguchi to take the final podium position. It also meant an all Ferrari podium. 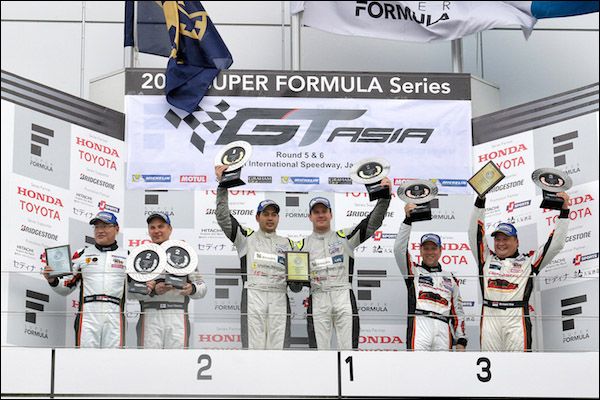 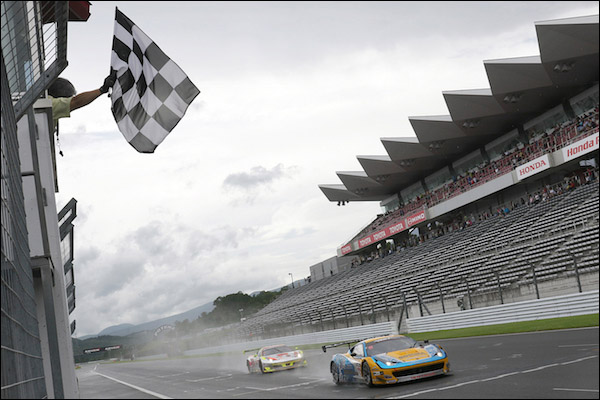 Qualifying for race 2 saw Australian Jonathan Venter take pole in the #99 Aston Martin just ahead of Hamaguchi in the #55 McLaren. Row two was a Clearwater racing lock out with Mok putting the #1 car just ahead of his teammate Wee in the #12 car. 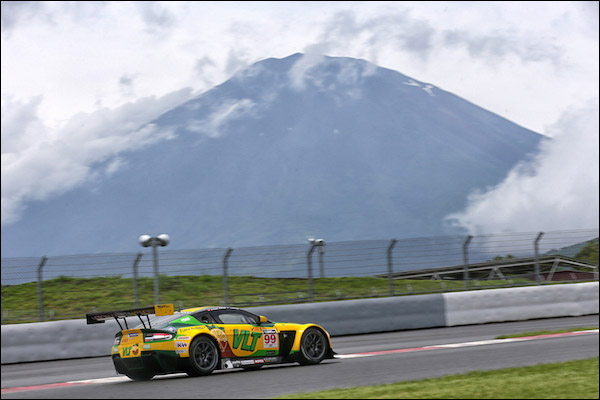 The opening lap had been full of drama in race one and had removed a handful of potential race winners before the lap charts were chalked. Anyone who thought that would lead to a more sedate start to race two was quickly disappointed. In the midfield the #88 Aston Martin of Frank Yu was spun round scattering cars everywhere but mercifully all avoided contact. 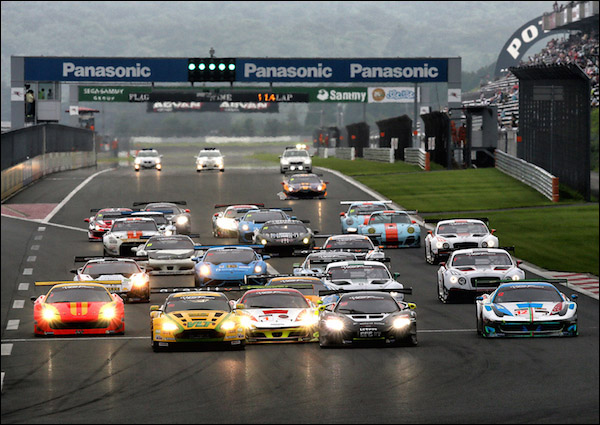 Venter had got a good start from pole and found Adderly Fong tucked in behind him in the #8 Bentley after a cracking start.

Seemingly not content with the lack of carnage on lap one, race one winner Piti clipped the rear quarter of Hamaguchi’s Mclaren sending both cars into the path of Mok in the #1 Ferrari. All three found themselves scuttling through the gravel. Hamaguchi ended up beached and Piti limped back to the pits with terminal damage. Mok continued but heavily delayed.

The unlucky recipient of unwanted contact in the first race the #9 Spirit of Race Ferrari of Wiser and Jiang found themselves benefitting from others misfortune this time. They had managed to get up into 3rd from the 3rd row of the grid. 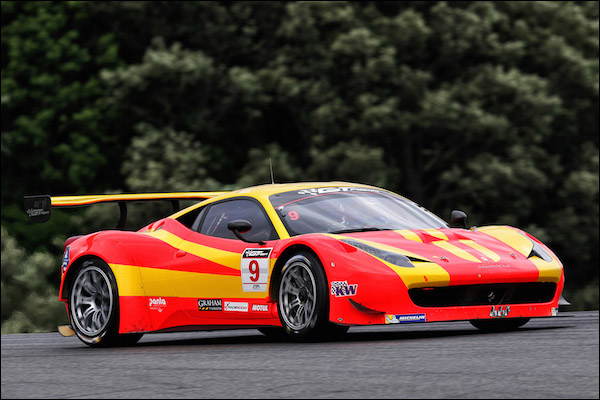 Just before the pit stops Fong managed to prize the lead from Venter in what had been a very entertaining 25 minute nose to tail battle. The two leaders pitted a few seconds ahead of the #9,#12 and #1 Ferraris.

The Bentley had pitted in the lead but they chose to take on a new set of rubber, something not reciprocated by the Craft Bamboo squad instead opting to send O’Young out on used rubber and save the time in the stop.

In the laps that followed Sawa hunted down the Aston at such a pace it seemed the result was a forgone conclusion but once the Bentley had firmly placed himself on O’young’s boot lid the Aston driver went about some fantastic defensive driving.

Once the Bentley did get bye O’Young cleverly retook him twice but thrid time was the charm and with the superior grip the Bentley was able to pull away. Sawa ended up crossing the line over 11 seconds ahead which didn’t give O’Young the credit he deserved for a spirited drive.

O’Young endured a late race scare as his tyres went off dramatically and the three chasing Ferraris nearly managed to catch him but O’young held on to 2nd. First of the Ferraris was the #9 Spirit of Race car of Wiser and Jiang. An exceptionally good drive by Wiser considering he held off the attentions of factory drivers Griffin and Vilander who finished 4th and 5th respectively. 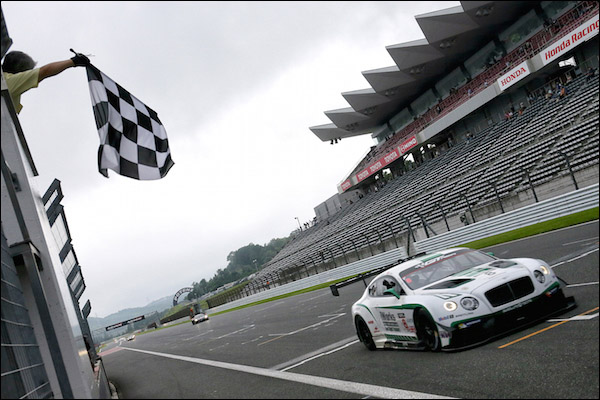 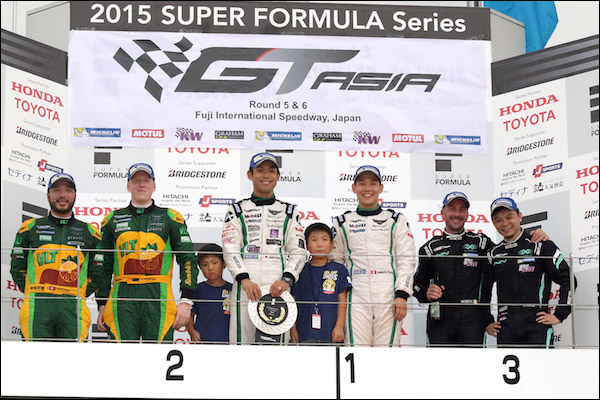 With 5 different teams winning in 6 races and none of those being last year’s champion Mok weng Sun who has been desperately unlucky not to top the podium, this is really shaping up to be a great championship battle. 25 points split the top 15 drivers in the standings and with 5 points paying races left any of those 16 will fancy their chances.

Next up is the sole longer race of the season. A three hour battle round Sepang in Malaysia on the 6th of September.