With the holiday season in full swing, there’s a danger we might be missing some of the racing that has been going on. This weekend, the ADAC GT Masters series visited the Nürburgring for rounds 9 and 10 of the 2015 season; while at Brands Hatch, the increasingly-popular GT Cup took place.

Rain at the Nürburgring is never unusual, and unfortunately the one-hour races on both Saturday and Sunday were affected by adverse weather conditions. Saturday’s race started dry and Martin Ragginger led initially in his Porsche 911. The Austrian stayed on slicks when the rain came though, and the Audi R8 of Jordan Lee Pepper and Nicki Thiim was one of the first to switch to wet weather tyres – a tactic that enabled them to take the chequered flag first. However, they were penalised 30 seconds for an infringement during a Safety Car procedure and demoted to fifth place in the final standings. This handed the victory spoils to the Audi R8 of Daniel Dobitsch and Edward Sandström that finished second on the road ahead of Luca Ludwig and Sebastian Asch in their Mercedes SLS AMG. The Mercedes duo was also penalised 30 seconds for an identical infringement though, which handed second place to Rahel Frey / Philip Geipel and third to Stefan Wackerbauer / Kelvin van der Linde, making it an all-Audi podium

In Sunday’s race it was the other orange kfzteile24 MS Racing Audi R8 LMS ultra that took the winner’s trophy, in the hands of Florian Stoll and Marc Basseng. Basseng took the start from pole position in the wet conditions, and after two Safety Car periods, was able to hand the car over to Stoll with a narrow lead over Andreas Weishaupt’s Abt-entered Audi. The gentleman driver was unable to fend off race 1 winner Daniel Dobitsch though, who rounded off a successful weekend for the team with a second place in race 2. Martin Ragginger and Klaus Bachler overcame a difficult weekend, finishing third in their Schütz Motorsport Porsche, after dropping to seventh place during the pit stops. 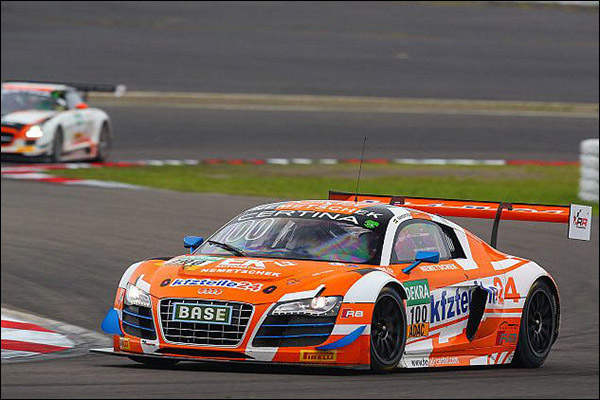 The GT Cup enjoyed two races on the Brands Hatch Grand Prix Circuit in dry and mainly sunny conditions for rounds 16 and 17 of the championship, on Saturday afternoon and Sunday morning.

Paul Bailey won the twenty-minute ‘sprint’ race in his Aston Martin Vantage after leaders Phil Burgan (Audi R8 LMS ultra) and Richard Chamberlain (Porsche 935) clashed at the left-hander at Stirling’s Bend. Although Burgan was able to continue a puncture later in the race meant that he finished at the back.

In the fifty-minute ‘pit-stop’ race, it was Chamberlain’s turn to benefit from a collision between Bailey and Burgan. Following his retirement in race 1, Richard started the 935 from seventeenth on the grid, but was up to ninth at the end of lap 2. On the next lap the Aston and Audi collided at Westfield. With Bailey stranded in the gravel, the Safety Car was deployed and the field closed up, Chamberlain now in fifth. It took just four laps of green flag racing before the Porsche hit the front, a lead Chamberlain would only lose during the pit stop interval, although the rear tyres faded towards the end of the race, making the handling of the Porsche somewhat interesting.