Round 4 of the Super GT championship saw the grid make its second visit to Fuji this year. The first time round it was all about Nissan. A 1-2 in each class certainly suggested they would be favourites come the weekend of August 8th/9th.

However after qualifying Nissan seemed anything but favourites. In GT500 the top Nissan only managed 6th. Pole though went to Lexus, the #38 crew of Tachikawa and Ishiura just taking it by a tenth of a second from the #8 Honda of Matsuura and Nojiri. Rounding out the top three was the #36 Lexus of Ito and Rossiter.

The pain for Nissan continued in GT300. The largely dominant GT-Rs were found wanting when the best any of them could manage was 11th. Instead it was the Honda CR-Z hybrid that took pole position seeing off the challenge of the #65 Mercedes SLS, the Toyota Prius Hybrid and the #7 BMW Z4 who start 2nd, 3rd and 4th respectively.

Blue skies greeted the crowds on race day, something that is certainly a rare occurrence for an endurance race around Fuji. 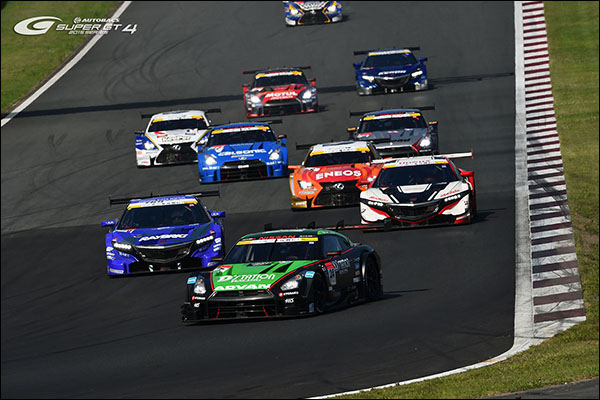 From the start much of the grid held station and Tachikawa held the lead. The #8 NSX in 2nd was coming under increasing pressure as the first few laps ticked by and by the time Rossiter had got by the Honda and up into 2nd, Tachikawa had built himself a healthy gap.

There was some very close racing going on in the early stages. The #8 Honda of Nbjiri, now in 3rd, was coming under threat from the #39 Lexus RC F in the hands of Kohei Hirate. Behind that things were getting a little too close. The two Lexus of Oshima and Caldarelli collided and the subsequent lost time left both struggling at the back of the class field, leaving them lots to do to salvage something from the weekend.

At the front Rossiter was doing his best to keep in touch but Tachikawa had managed to give himself a 5-second buffer. As each team began to take their mandatory pit stops one stop stuck out. The Nismo team managing to get the #1 GT-R out in super-quick time to gain a handful of places and hand 3rd position to Tsugio Matsuda who had just got in the car.

Going into the 2nd half of the race, the #38 Lexus and the #36 Lexus were battling it out for the lead with the #1 Nissan, the #100 Honda and the #24 Nissan chasing them down. It didn’t take Matsuda long to catch the two leaders. He made a pass on the #36 car with relative ease before setting off after Ishiura in the lead. With the #1 car off in pursuit of the leader the sister #24 Nissan decided to make a move too. First passing the #100 Honda and then setting about chasing the Rossiter/Ito Lexus.

As the laps ticked down with just 6 to go, the #24 car in the hands of 23-year-old Daiki Sasaki made his move. First he passed the now slowing #36 Lexus, with Ito appearing to be struggling with his tyres. He made his way past his fellow Nissan and up into 2nd. With just 4 laps to go it looked like he had timed his burst just too late. However, his superior traction was evident and coming out of one of the hairpins he got better drive than the Lexus, taking the lead with just 3 laps to go.

There was to be even later drama though as the race for the final podium position was to go to the wire. With 5 laps to go and sitting in 2nd Matsuda in the #1 Nissan must have thought a podium was a certainty but after losing 2nd to the #24 sister car he was left gutted by another Nissan, the #12 car in the hands of De Oliveira. The #12 car had come from nowhere on a different strategy to snatch 3rd with just three corners to go.

So the spoils went to the #24 D’station crew. For young Sasaki it was his first overall win in Super GT and for his evergreen teammate Michael Krumm it was a first Super GT win for over a decade. So certainly in GT500 Nissan had the last laugh once more. 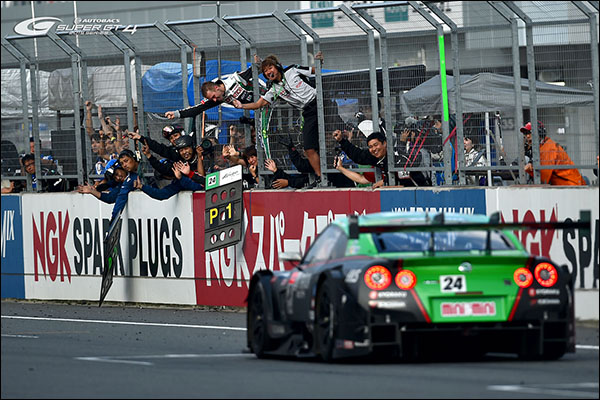 As the pack set off down to turn one the pole sitting Honda CR-Z held the lead comfortably ahead of fellow front row sitter the #65 Mercedes. Shinichi Takagi in the CR-Z was a man on a mission and over the first ten laps built a 12 second lead.

The CR-Z was way down the road but behind it was a battle of the more familiar GT3 machinery. A group containing three Mercedes SLS, a BMW Z4 and a Nissan GT-R were swapping position lap after lap.

There was nothing to chose between the five of them as the pit stops rolled round but the leader was gone. A 20 second gap had left little doubt that without an issue for the #55 Honda the race was now only on for 2nd.

One of the Mercedes challenges fell by the wayside during the stops though. A problem at the stop with one of the wheels and then a subsequent issue out on track with the same part left them way down as they crept back to the pits.

After the stops only two cars ever looked like trying to hunt down the Honda up front. The first to take up the mantle was the #7 BMW in the hands of Jorg Muller. He was making good inroads until he got tangled up with a back marker and damaged the front of the car. Damage that would eventually cause the car to retire.

So it was left to the #65 Mercedes that had sat alongside the CR-Z on the front row to chase for victory. But it wasn’t to be as the gap was just too large.

Takashi Kobayashi brought the Honda home safely and took a commanding win at the mid point of the season. The #65 Merc finished a fairly lonely 2nd with the #11 Mercedes taking the final podium place by just winning a very close race long battle with the #51 BMW. Andre Couto held on to his championship lead with a solid drive alongside Katsumasa Chiyo, with them ending up down in 6th. 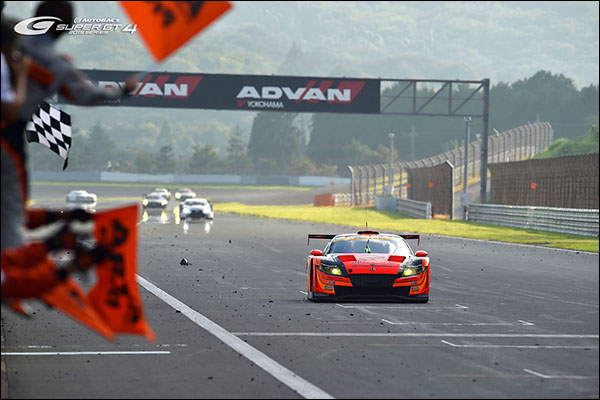 So overall in GT500 Nissan will leave happiest, two cars on the podium after a fairly lacklustre qualifying, Lexus will be left wondering how they didn’t win and will certainly be looking at how alarmingly everything fell apart in the closing stages with what seemed like high tyre wear. Honda will leave happy too. Three cars in the top 10 and add to that the GT300 win. GT300 has been very unpredictable thus far this season with the one constant being the pace of the Nissans. However they were left wanting this time round which only adds to the inability to predict a winner from the pack.

Next time out is at Suzuka for the 1000KM, the signature race for the series held of the weekend of the 29th and 30th of August.