Virginia International Raceway welcomes the Tudor United SportsCar Championship this weekend as the IMSA season winds towards a conclusion. The race will be a GT feature with only the GTLM and GTD classes in action. VIR is a 3.27 mile natural terrain road course, situated in rural southern Virginia very close to the North Carolina state border.

VIR has long IMSA roots as the very first IMSA GT race was held at VIR in 1971. (Thanks to IMSA’s PR staff and VIR historian Bill King for the nugget.) The first race was won by Peter Gregg and Hurley Haywood in their Brumos Porsche 914/6 ahead of a Corvette and a gaggle of Porsches.

The track closed in 1974, but reopened in 2000. Since that time, VIR has steadily made infrastructure improvements and re-established its place on the American road racing map. VIR staff has been very active in promoting the 2015 IMSA race, ranging from hosting a local media day in July to frequent engagement on social media.

In 2014, three safety car periods set the stage for a dramatic finish. Giancarlo Fisichella and Pierre Kaffer claimed the GTLM win in their Ferrari with Fisichella’s last lap pass to overtake the Falken Tires Porsche of Bryan Sellers and Wolf Henzler. The Porsche had a significant lead before a late safety car, but was marginal on fuel and the yellow provided just enough fuel mileage for Henzler to reach the end. Turner Motorsports won GTD honors with Dane Cameron and Markus Palttala at the controls of their BWM Z4 on their way to a championship season. 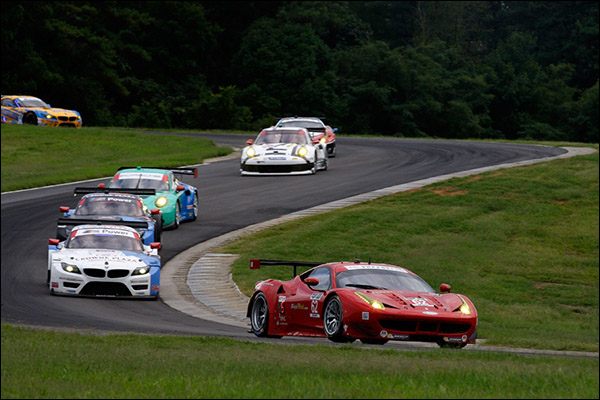 The prototypes have been given the weekend off for the 2 hour and 40 minute event at VIR this weekend. The combined GTLM and GTD field is expected to see 18 runners with the usual suspects in attendance, split between 8 cars in GTLM and 10 in GTD. The modest car count means there should be less traffic and more space to run.

Jan Magnussen and Antonio Garcia in the #3 Corvette take their GTLM season points lead to VIR with a slim margin over Bill Auberlen and Dirk Werner in the #25 BMW and Nick Tandy and Patrick Pilet in the #911 Porsche. Pilet and Tandy have been on fire, winning the last two races at Mosport and Road America and considerably narrowing the points margin. Joerg Bergmeister and Pierre Kaffer put on a show in the closing laps at Road America, but both likely need some help to challenge for the season points tally. 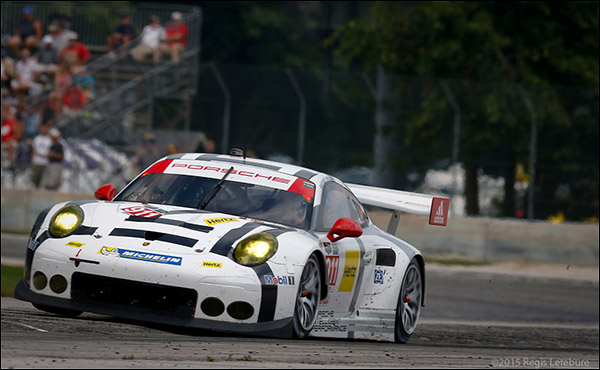 Christina Nielsen will defend her new status as GTD season points leader, along with co-driver Kuno Wittmer in the #007 TRG Aston Martin. It is also the first time an Aston Martin sits atop the point standings in an IMSA series which must be extremely satisfying to the TRG bunch. TRG tested at VIR in July, so they should have some comfort with the track. 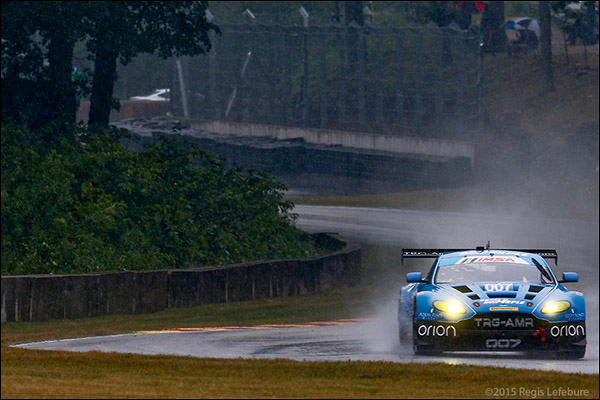 The Paul Miller Audi R8 of Christopher Haase and Dion von Moltke slipped to second due to a DNF at Lime Rock and a sixth place at Road America. Townsend Bell and Bill Sweedler in their Ferrari haven’t challenged for wins, but are eyeing a strong season points finish from their perch in third. Leh Keen and Cooper MacNeil have quietly brought their Alex Job Porsche just behind in fourth.

At this point, the weather looks dry. Friday practice is followed by practice and qualifying on Saturday. Sunday is raceday. DSC will have coverage for each day and IMSA Radio will be calling each session live as it happens.