The Australian GT Championship presented by Pirelli returned to the track with round four taking place at Sydney Motorsports Park.

The two, one hour races would again be taking place as a support to the V8 Supercars and attracted a capacity 34 car grid. The major change though from the last round at Townsville was the announcement from Greg Crick of his immediate retirement. The former Champion was racing alongside Chris Mies in the Jamec Pem Audi R8. Ryan Miller has taken his place for the weekend.

Miller had previously raced with the Trofeo Ferrari squad before their demise.

The two qualifying sessions would be both run in sunny conditions but traffic was an issue throughout the sessions. Tactics would also play a role with the compulsory pit stop times being affected by how well you qualify.

The two standouts from qualifying would be Matt Campbell who topped the first session in the Ginetta G55 GT3 and Steve Owen who took pole in the Trophy class Ford GT.

Though there would be controversy with Campbell losing his best time due to exceeding track limits, dropping them down to 13th on the grid.

Owen took pole with 1:27.74, almost three tenths in front of Campbell and Mies.

The sessions would not be without incident, however. Nearing the end of the first qualifying session, a spin from the Daniel Stutterd in the FreeM Lamborghini on the exit of turn 7. He was by Jan Jinadasa in the JJA Lamborghini, eliminating the JJA car for the reminder of the weekend.

The incident could have been a lot worse as Nathan Antunes in the Beechwood/Swirk Audi R8, came quickly upon the scene, missing the red flags from the marshals and the other slowing cars. He slalomed between the crashed and slowing cars, narrowly avoiding the stricken JJA Lamborghini.

Antunes though would escape a sporting sanction and line up thrid behind the Owen/Kevin Weeks Ford, Mies/Miller Audi. Jono Lester/Greame Smyth Ferrari would qualify fourth, the first time they have been off pole this season.

Sunny skies would greet the drivers for the first of the one hour races. From the start it was clear that it was going to be a battle between the first two – the Ford GT and the Audi R8 of Mies/Miller. 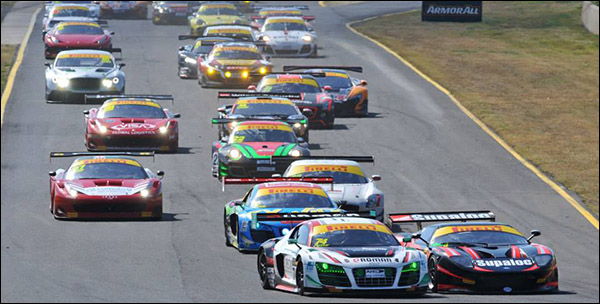 The first 30 minutes saw the Ford control the pace, weaving through traffic. Mies in the Audi was never far behind but could rarely challenge Owen in the Ford, preferring to race safely waiting for a chance to pounce.

Further back, an over-enthusiastic move from Matt Campbell in the Ginetta saw light damage to his car when he tried to overtake Justin McMillan in his Lamborghini into the ultra fast turn one. The move didn’t work, McMillan spun and retired while Campbell continued on but had damage at the front end, retiring a few laps later.. 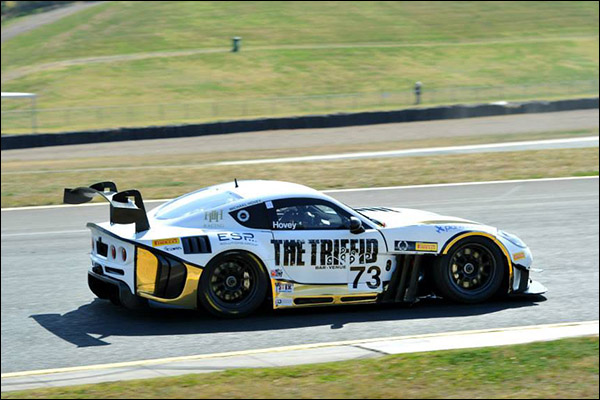 Soon after, Richard Gartner’s Porsche would unceremoniously dump the contents of its radiator on the racing line. He spun on his own fluid and would retire. A few others would spin including the Tim Miles Aston Martin – making its debut int he GT Championship this weekend.

Worse would soon follow though as Andrew Jones would lose the Ferrari at the end of the front straight, plowing straight into a wall of tyres, destroying the wall and damaging the Ferrari. Jones would emerge unscathed but the safety car would last for a good 20 minutes.

The safety car would come out on the half-way mark of the race, allowing most to make their compulsory pit-stop.

The field circulated around behind the safety car while the wall was repaired with the green flag coming out with four minutes – or two laps remaining.

Weeks, now in the Ford was in the lead from Miller in the Audi, Antunes in his Audi. The Lester/Smyth Ferrari was in seventh. 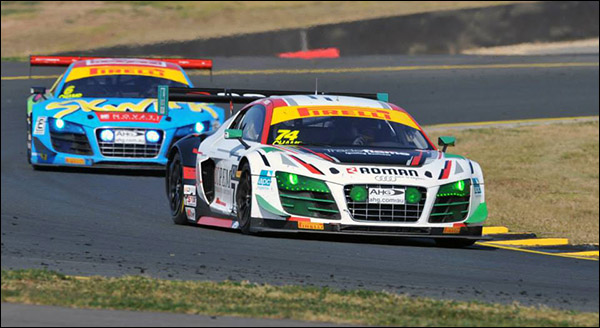 Weeks, the AM in the Ford would soon fall into the clutches of those behind him, Miller going on to take a tense victory from Antunes, with Smyth fighting to third.

However the Weeks would have a massive accident after turn seven, damaging both ends of the Ford in the process. He would be taken to hospital for precautionary checks. Others, including Barton Mawer’s Audi would be caught up in the incident.

It was a messy end to an incident pack race.

Theo Koundouris crossed the line to take Trophy class honours in the Supabarn Porsche, while Michael O’Donnell to take the Challenge class win from Tony Alford.

The second, one hour race took place on the Sunday morning and the weather could not have been more different with very wet conditions greeting the drivers. While it did not rain much during the race, the track stayed wet for the entire distance.

The slippery track immediately caught out a few drivers with Tony Quinn backing the Darrel Lea McLaren into the concrete wall after turn three. That brought out the safety car that would last for a few laps.

Upon the green flag, the Aston Martin of Tim Miles would also spin at turn three but would hit the tyre barrier and was able to continue.

After 20 minutes though, the Tony Walls would also spin at turn three and like Tony Quinn would miss the tyre barrier and hit the concrete wall, ripping a back wheel off his McLaren bringing out the safety car.

The safety car would come out just as the pit window opened, allowing most to take their stops. Some like Nathan Antunes and the Trass Family Ferrari would wait to the end of the safety car to pit – putting them almost a lap down as the green flag fell.

Conversely the Erebus Mercedes squads held out even longer to the end of the pit stop window to take their stop, hoping the track would dry out enough to change to slick tyres. The gamble would not work and the two SLS GT3 machines would fall through the field.

Through the yellow flags and pit stops, Grant Denyer, driving a solo race in the Maranello Ferrari 458GT3 would find himself in a comfortable lead. He would gap the field with, at times, leading by up to 20 seconds. 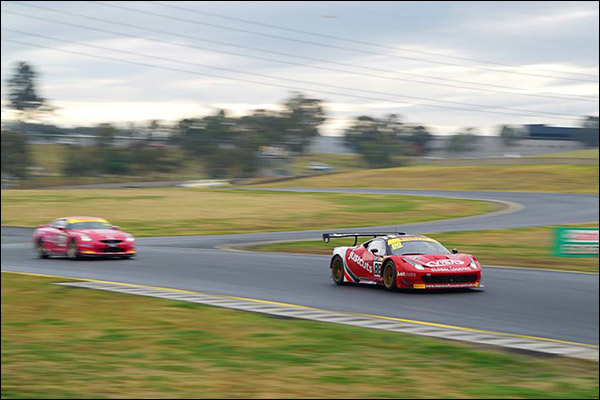 Denyer, who took his first GT Championship victory last time out at Townsville, would win race two with a comfortable gap.

The fight for second though would be intense with Klark Quinn in a McLaren 650S GT3 and Hayden Cooper in the Trophy class Motorschool Ginetta G50Z. Cooper was punching well above his weight, using the wet to fight with the much faster cars. 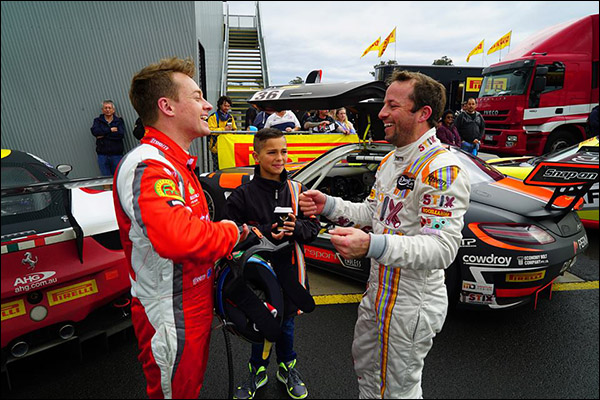 He would race wheel to wheel with Klark Quinn but it would be heart break for Cooper and teammate Ben Foessl who retired on the final lap after a mechanical fault robbed them of a podium and confined the car to a DNF. It was even more heartbreaking as the team had a race against time to even make the race, shipping a part from Queensland after a fault in the practice sessions.

Their bad luck would be Antunes’ good luck after battling his way from almost a lap back to take the final podium. Antunes’ fight would go better than the Trass Family Motorsport duo of Smyth/Lester who would fight back to 12th.

Chris Mies/Ryan Miller, the race one winners would finish fourth with Scott Taylor and Aaron Seaton coming home fifth. Seaton, on debut this weekend is the son of touring car legend Glenn Seaton and grandson of Bo Seaton. It was a successful debut weekend for Aaron, who certainly has racing in his blood.

Mark Griffith held on for his first win in the Trophy class, finishing 7th outright in the Hogsbreath Cafe Audi R8. Greg Taylor and Barton Mawer consolidated their Championship lead in second.

The fifth round takes place at Melbourne’s Sandown Park in September.