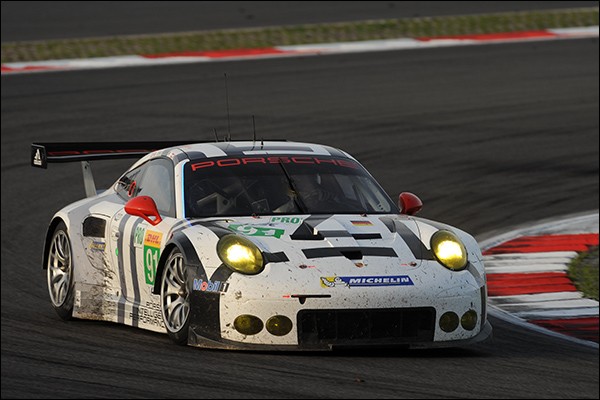 Porsche’s GT squad bounced back after a miserable Le Mans with a 1-2 finish, Micheal Christenesen and Richard Lietz in the #91 911 heading home French duo Fred Makowiecki and Patrick Pilet in the sister #92 machine. But the picture could have been very different had the championship-leading #51 AF Corse Ferrari of Gianmaria Bruni and Toni Vilander not ground to a halt in the first 15 minutes of the race with electrical trouble.

The car was eventually recovered to the pits and repaired, so the reigning world champions were able to circulate for the remainder of the six hours several laps down and salvage six points for a seventh-place finish. Third in class went to their team-mates – James Calado and Davide Rigon in the #71 car – after a fighting drive that saw them overcome bodywork damage and a puncture to hang on to their podium place. 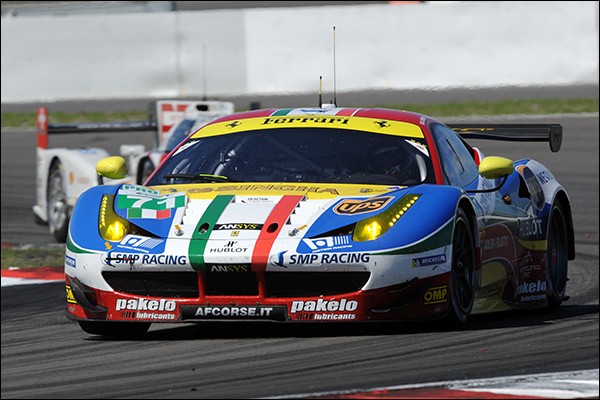 Their main rival throughout was the eventual second-place-finishing #92 car, which had to recover from an early stop-go penalty for a jump start on the part of Makowiecki. Porsche’s superior pace compared to Aston Martin here allowed Makowiecki to repass them with relative ease.

Christensen in the #91 was able to get past Calado for the class lead, as the Brit dropped to fourth when the field restarted after a full-course yellow to recover the stricken #51 car.

But Calado too was able to find his way back past the Astons, setting the scene for his and Makowiecki’s epic battle in the middle of the race when they ran nose-to-tail for lap after lap. At one point, Calado accelerated slower than before out of the Dunlop hairpin due to yellow flags being shown and he was subsequently hit in the left-rear by Makowiecki.

“It was unfair and uncesessary,” a clearly disappointed Calado told us after the race. “We all have screens in the car that show the flags, so to do that is pretty amateur. That forced us to pit early so threw off our strategy

The bodywork continued rubbing against its tyre, but Calado and subsequently Rigon fought on (the latter with Pilet). However, eventually the car had to pit again when the rubber finally cried enough and punctured.

“We tooks some bodywork off but evidently not enough,” continued Calado. “Fortunately when the puncture happened it was in the last sector so we didn’t lose too much time. On the positive side we had strong race pace and were able to close the points gap to the #51, but it was very bad luck for them to have that problem.”

The earlier impact nearly ended up affecting the final finishing order when the #92 was dealt a drive-through penalty for avoidable contact by the stewards in the final hour – but by then it was far enough ahead to still emerge with a 15-second cushion over the Ferrari and so hang on to second.

Winner Lietz said after the race: “It was hard – not just for us but for everybody. It’s not easy around here with the gravel traps waiting if you make a mistake. That was the key – we controlled our pace a little towards the end.”

Christensen added: “My first stint was alright but the second was quite unpleasant. The traffic was very frustrating. I know it’s the same for everyone but sometimes you feel unlucky – fortunately it wasn’t too difficult in the end.” 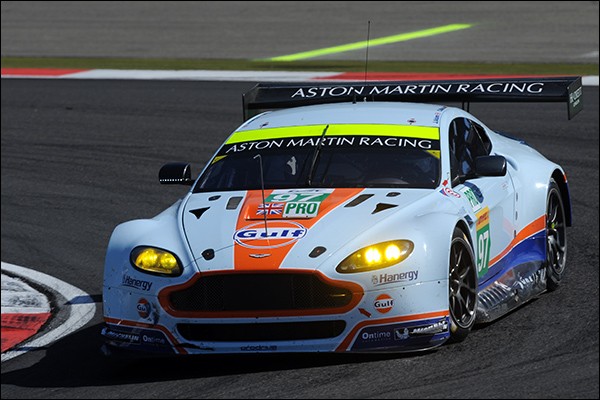 The Pro Aston Martins had a race to forget. Neither the #95 Nygaard/Sorensen car, the #97 Turner/Mucke/Adam entry or the #99 Rees/Stanaway/MacDowall Vantage ever looked like having the pace of the front-runners – the post-Le Mans EoT changes clearly biting hard. In the end the #95, #99 and #97 came home fourth, fifth and sixth in the class respectively. 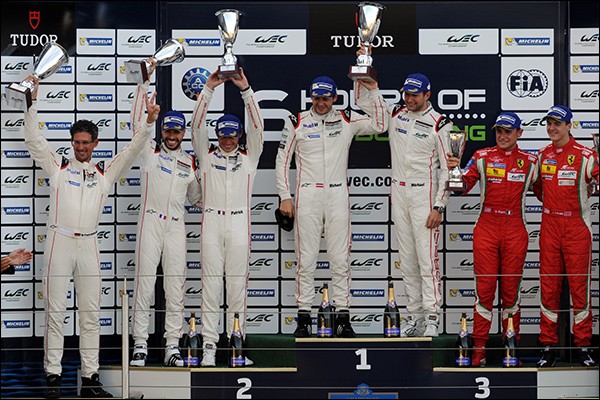 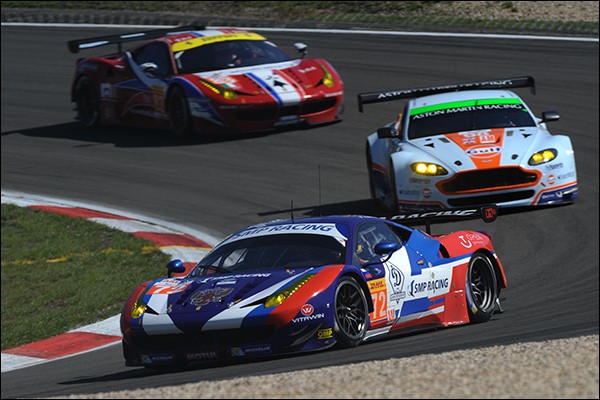 Le Mans winners Andrea Bertolini, Victor Shaytar and Andrey Basov took their #72 AF Corse-run SMP Racing Ferrari across the line first again following their triumph in June. The trio fought a cat-and-mouse battle with the #98 Aston Martin of Paul Dalla Lana, Pedro Lamy and Matthias Lauda for most of the race, with the two cars diverging slightly on pit strategy and eventually crossing the line less than 30 seconds apart after six hours. 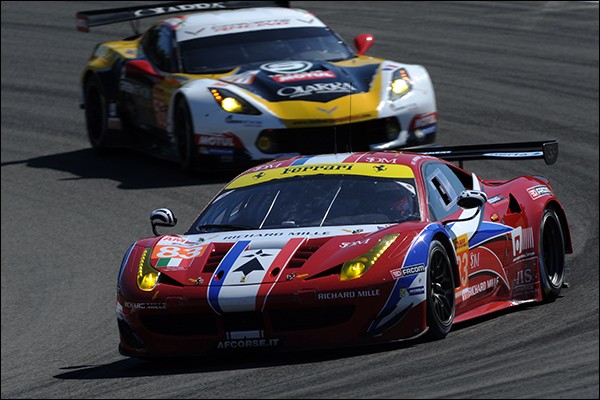 Third place in class was equally hotly contested, but in the end an extra pitstop to replace a blown-out window in the #77 Dempsey Proton Porsche saw Patrick Dempsey, Pat Long and Marco Seefried miss out on a podium – beaten to it by Rui Aguas, Francois Perrodo and the evergreen Emmanuel Collard in the #83 AF Corse Ferrari.

At the start, Shaytar had let both Proton Porsches past in the early laps, but found himself second behind Long when Earl Bamber in the #88 was hit by another car, sending him to the back of the pack.

An unorthodox pit strategy kept that Porsche somewhat in contention during the first half, but stronger pace from Seefried in the eventual fourth-place-finishing #77 entry saw him overhaul the #88 once Al-Qubaisi took the wheel. A later spin that left the car with front-end damage relegated it to sixth in class at the flag, ahead of the #96 Aston Martin of Hall/Goethe/Castellaci.

An off-track moment from Aguas nearly ended the #83’s chances, but solid stuff from the car’s bronze driver Perrodo and consistent laps from Collard gave them what they needed to hold off the Dempsey Porsche challenge.

Ahead of them, it was Bertolini’s greater pace compared to Dalla Lana when they were at the wheel of the #72 Ferrari and #98 Aston respectively that proved key to the SMP car taking the lead.

The Italian veteran made clever use of an LMP2 car’s tow than the main straight to get past the Aston into turn one and was soon pulling out a gap at the head of the class – which Shaytar was able to mantain when he took over from Bertolini and Lauda stepped in for Dalla Lana towards the end. 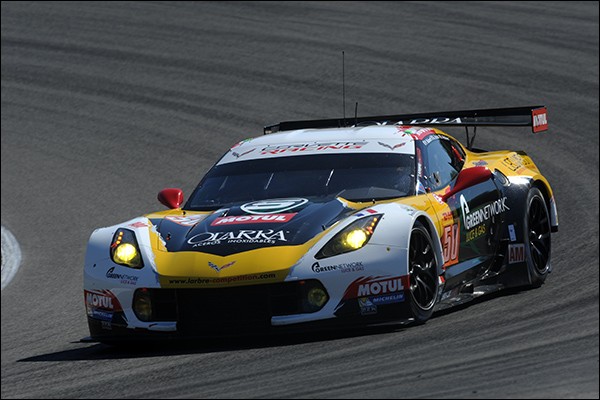 The #50 Larbre Corvette finished fifth in class but was never really in the mix and suffered a further setback later in the race when it was handed a 35-second stop-go penalty for pitlane speeding. 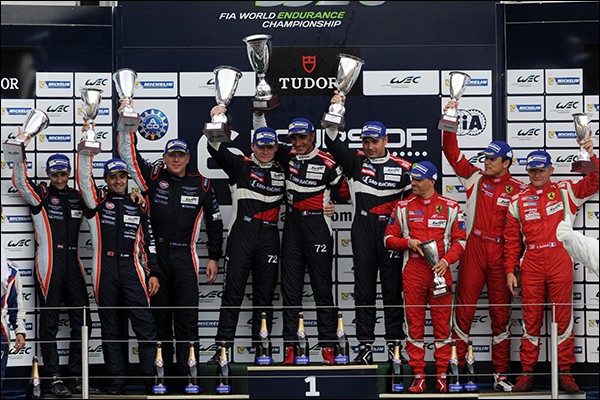