The opening laps of the race were a rather quiet affair, with clean racing up and down the prototype categories. Both Porsches had impressive starts and held station at the top. The only drama in P1 being the #13 Rebellion peeling off into the pitlane on the second warm-up lap with a mechanical issue. The Rebellion mechanics worked frantically on the #13’s rear. 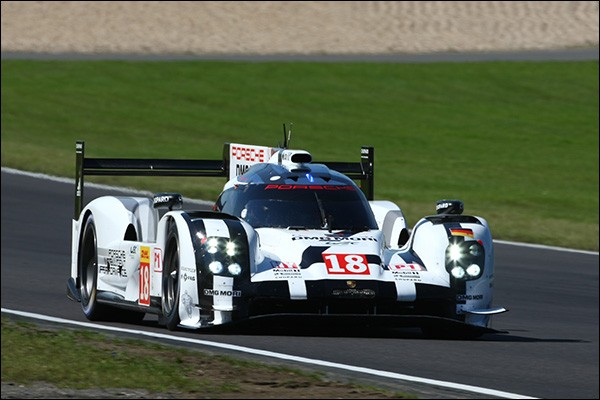 Neel Jani in the #18 919 was lapping around a second faster per lap than the pair of Audis, extending his lead to four seconds after just five laps of racing before the traffic started to factor.

In LMP2, Tandy continued to lead the way from pole in the KCMG Oreca, ahead of Sam Bird’s G-Drive Ligier and Nelson Panciatici’s Alpine. Like LMP1, there wasn’t much squabbling when the race went green, many drivers clearly trying to get into a rhythm early. 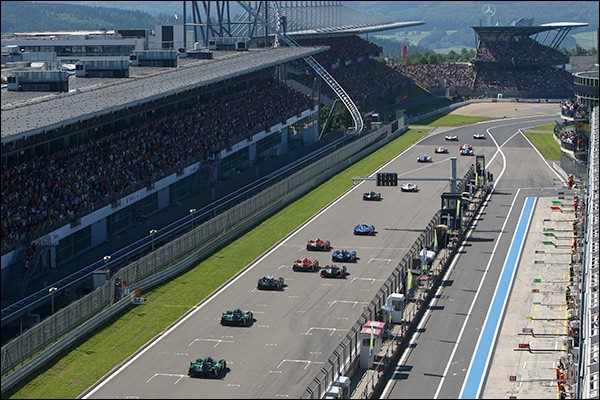 The first real move for position, saw Pipo Derani steer the #28 G-Drive Ligier into third by diving up the inside of Panciatici’s Alpine at T1, 15 minutes into the race.

A full-course yellow was called for the #51 AF Corse Ferrari, which was stopped out on track at the Dunlop hairpin. This gave the drivers, in particular Jani and his teammate Timo Bernhard behind, a chance to breathe and assess the situation. The #18 led the field by 14 seconds, while Bernhard in the #17 had his mirrors full of the #8 Audi of Loic Duval.

When the race went green once again, the two Audis looked to pounce on the #18 Porsche, but through the traffic, initially struggled to challenge. Duval didn’t give up, though, and after a few laps managed to get close enough to dice with Bernhard through the GTE field.

Further down the order, Jonny Kane in the Strakka Gibson was on the move, the Brit getting past Oliver Webb’s SARD Morgan for fifth in P2 and pressuring the Alpine for fourth. Panciatici’s defensive driving proved frustrating for Kane.

With half an hour gone, Jani’s lead had extended to 20 seconds while the trio of German entries behind continued to battle. It was a stalemate until the first round of stops after 45 minutes. Mark Webber climbed aboard the #17, and the team changed the nose of the car, forcing it to relinquish the position to the Audis and start the second stint from fourth. The #7 Audi pitted early due to a puncture.

When the round of stops was over, Lieb was aboard the leading #17 Porsche, ahead of the #7 Audi, #17 Porsche and #8 Audi. The #12 Rebellion then had niggles of its own, and pulled off the circuit with mechanical issues.

In P2, the SARD Morgan managed to leapfrog both the Apline and Strakka Gibson in the pits, leaving Webb fourth. Kane finally got past the Alpine to retake fifth place after rejoining the race at turn one. Out front, it was still the KCMG Oreca leading the pair of G-Drive Ligiers as the hour concluded.

A complete satellite feed failure in the media centre made coverage of the opening moments of the FIA WEC Nurburgring 6 Hours rather difficult, but in GT it was pretty much as you were after the first couple of laps, with the front-row Ferraris of Bruni (#51) and Calado (#71) retaining first and second, ahead of the #92 Porsche of Makowiecki, which had got past the third-place starting #95 Aston Martin of Sorensen.

It proved to be too good of a start for the Frenchman, however, as his car was pulled in for a drive-through penalty for jumping the lights shortly afterwards. The sister #91 Porsche of Christensen thus inherited third and Makowiecki dropped to the back of the Pro pack.

In GTE Am, polesitter Shaytar in the SMP Ferrari was swamped by his rivals away from the line, dropping to third behind Long in the #77 Proton Porsche and Bamber in the #88 sister car. The Le Mans winner was spun out by an Am Aston Martin shortly afterwards, however, promoting Shaytar to second and Collard to third in the #83 AF Corse Ferrari, with Bamber slipping to the tail of the field.

With just 15 minutes of racing completed, Bruni was spotted circulating slowly, then stopping, in the leading #51 Ferrari at turn eight, bringing out first local yellows, then a full-course yellow. The car was towed off the track by a recovery vehicle so racing could resume after a pause of about five minutes. Bruni had by this point managed to coax the 458 back into life and rejoined the action.

At the front of the field, there was an apparent problem for Calado in the other Ferrari, which dropped to fourth, handing the lead of the class to Christensen’s Porsche and second and third to Sorensen and Stanaway’s Aston Martins. Meanwhile, Bruni had headed for the pits in the #51.

Makowiecki’s fightback began on lap 15 with a pass on Mucke’s #97 Aston for fifth in the GTE Pro class, while in Am, Lamy in the #98 Aston had overhauled Collard’s Ferrari for third. The veteran Frenchman lost another place to Ruberti in the Larbre Corvette shortly after. 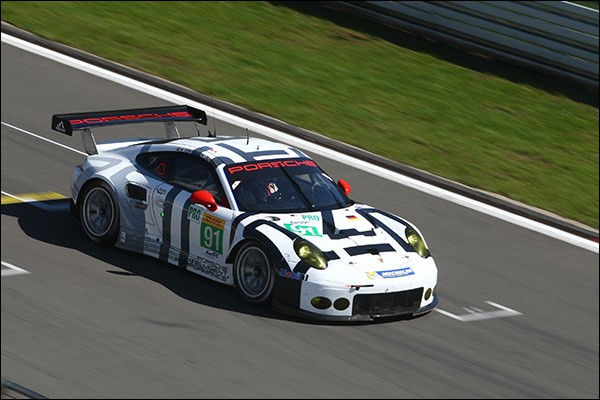 At 35 past the hour, Christensen had completed 17 laps and built up a 13-second lead on fellow Dane Sorensen, with Stanaway close behind his Aston team-mate. Long (below) was well ahead in GTE Am, with Pro-class runners Makowiecki and Mucke between him and Shaytar in the second-place Ferrari for now. 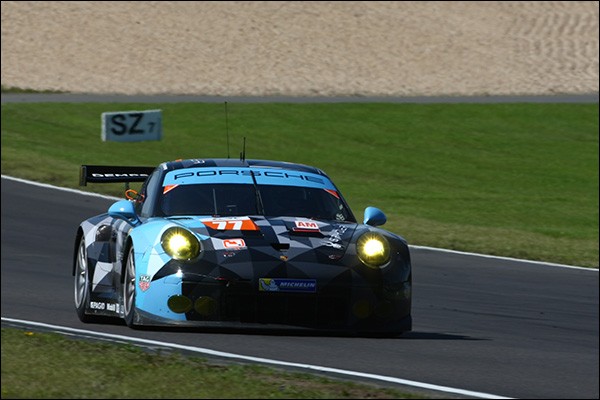 In Pro, Calado got back into a podium position on lap 19, repassing Stanaway in the #99 Aston. In the garage, AF Corse mechanics diagnosed Bruni’s sister Ferrari with electrical problems in the garage and sent it back out, now eight laps off the GT lead.

Second to sixth in GTE Am were running practically nose-to-tail as the first hour wound down, the Ferrari of Shaytar and Aston of Castellaci bookending a train that also included Lamy’s Aston, Ruberti’s Corvette and Collard’s Ferrari. Lamy made a forceful pass down the inside of Shaytar in turn one to take second at the start of lap 23.

Mucke in the #97 Aston was the first scheduled stopper, handing the mysteriously off-form car to co-driver Darren Turner after 24 laps and 52 minutes of running.