Gutstavo Yacaman snatched second spot in LMP2 off teammate Romain Rusinov in the #28 G-Drive Ligier as the race entered its second half. This allowed the race-leading KCMG Oreca of Matt Howson to extend its lead to seven seconds as the pair squabbled. 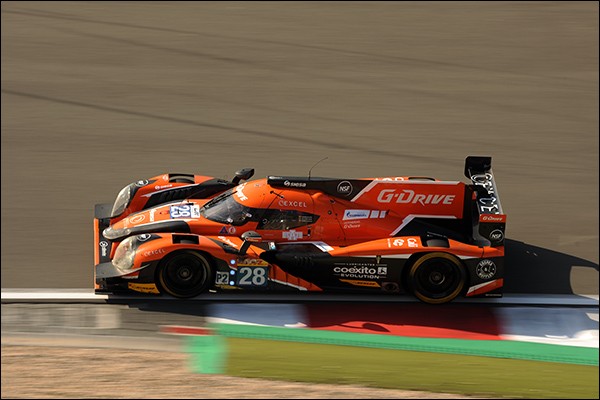 Further down the standings in LMP2, a battle once again began between Alpine and Strakka for fifth place, but this time it was Paul-Loup Chatin vs Danny Watts. The eventual victor was Watts, who powered past going into Turn 1, his next target would be the SARD Morgan 30 seconds ahead.

Halfway through the fourth hour, the top three in the LMP2 class were then within five seconds of each other, with Howson’s Oreca and Yacaman and Rusinov ’s Ligiers all ready to pounce on one another. But in the end, pit-stops interviewed and the dicing never really started.

In LMP1, the running order was very much the same as the race hit its final third. Although a recovery drive to second place by the #18 Porsche looked to be on the cards. After being two laps down, Jani managed to climb to second after the Audi’s four pit stop (while out of sync). The places filled by the Neuburg-based team seemed within reach with the Swiss driver lapping over a second a lap quicker than the Audis on average. 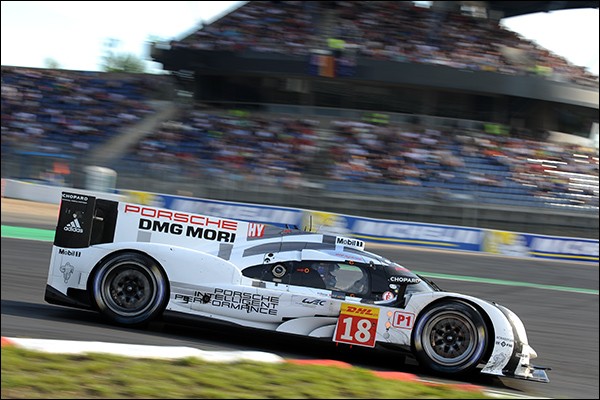 When Jani did finally catch Oliver Jarvis’ #8 Audi, he made it look easy, powering past down the pit straight moments before a full-course yellow was called for excess gravel at the final chicane once again.

Meanwhile, Ricardo Gonzalez had a rough sequence through traffic in the second place #28 G-Drive Ligier, and through the Ford Chicane tagged the Larbre Corvette, allowing the sister #26 Liger of Julien Canal through and into second space.

After serving a penalty for speeding in the pit-lane, seventh placed Strakka Racing was forced to push the Gibson into the garage to change the rear of the car after contact with an Aston Martin. 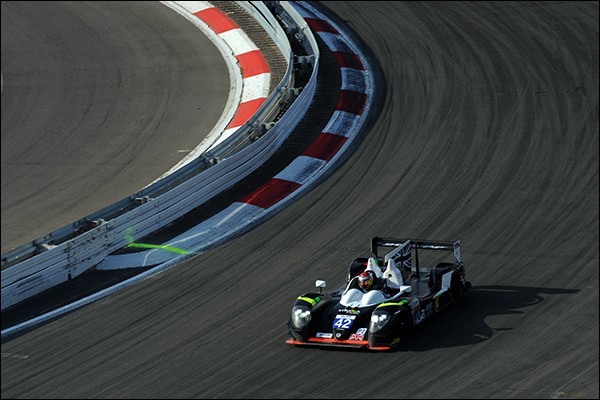 With 90 minutes to go, Neel Jani was in striking distance of the #7 Audi. He tried everything to make the pass to put Porsche in position for a 1-2, but by the end of the fifth hour it turned into a three-way fight. Lucas Di Grassi in the #8 had done a mighty job to keep up with the #18, and managed to sneak up the inside of Jani to push the Porsche back to third at the Dunlop Hairpin after a mighty scrap between himself and Tréluyer through the complex which saw the pair run side-by-side.

It was thrilling racing with one hour to go.

At the start of the fourth hour, Rigon and Pilet picked up exactly where Calado and Makowiecki left off after the stops. The battle for second in GTE Pro became increasingly robust and risky with every corner – while the stewards announced they were investigating the earlier contact between the two cars.

Pilet eventually emerged in front, while further up the road Lietz was back aboard the #92 Porsche and leading the Pro class. Sorensen, Rees and Adam made it an Aston 4-5-6, with Bruni many laps down in the #51 Ferrari following its early electrical problems. 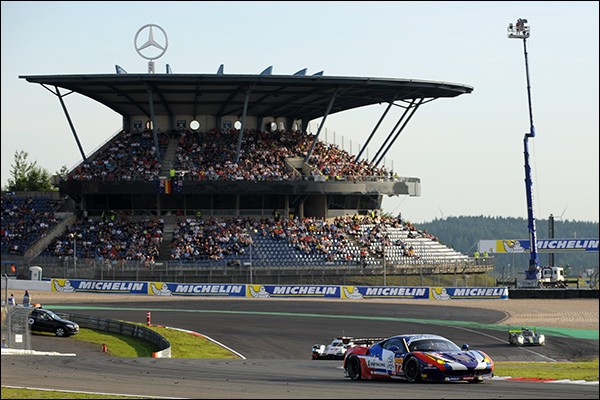 Mathias Lauda continued to lead GTE Am in the #98 Aston, with nearly a minute in hand over Pat Long in the #77 Porsche after 90 laps. Basov was third in the #72 SMP Ferrari (above), a comfortable 25 seconds or so ahead of Roda in the Larbre Corvette.

About 12 minutes into the hour, the bodywork rubbing against the #71 Ferrari’s left-rear tyre finally took its toll and punctured the rubber, sending Rigon diving to the pits for a replacement. This handed third place in GTE Pro to Sorensen on a platter.

Lauda brought the #98 in on lap 96 to hand over to Pedro Lamy, temporarily dropping the car to third in GTE Am, while in Pro, the #95 Aston also pitted (Nygaard back in for Sorensen), temporarily putting Rigon back up to third.

Half-way through the fourth hour, the GTE Am-leading #77 Porsche were seen preparing a new door for the car due to one of its windows having blown out – although the car didn’t pit straight away.

Next into the box was the #72 Ferrari – pro driver Andrea Bertolini taking over from the bronze-rated Aleksey Basov on lap 112, with just over two hours of the race remaining. The fifth-in-class Larbre Corvette pitted not long after, with Poulsen taking over the wheel. 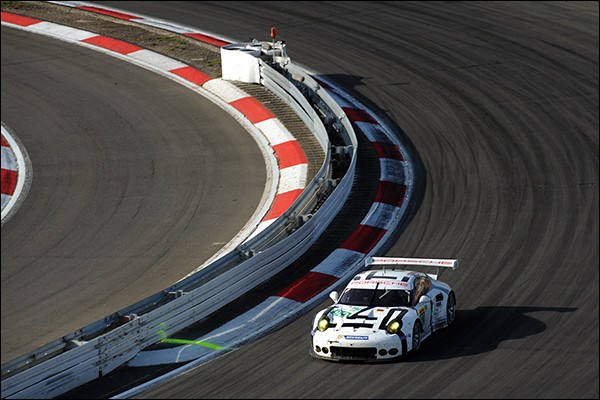 The GTE Pro leaders started to come in on lap 120 – the two Porsches going in one after the other from first and second in the class for Christensen and Makowiecki to take over from Lietz and Pilet respectively. Patrick Dempsey also took over the #77 Porsche and rejoined second in GTE Am – now with Bertolini bearing down nine seconds behind in the SMP Ferrari.

Calado took the #71 Ferrari over from Rigon and re-emerged in fourth behind the #95 Aston, by now on a slightly different pitstop sequence to the AF Corse car. Within a few minutes, a full-course yellow was thrown to clear up gravel from an LMP2 car’s off-track moment. The #77 Porsche came back into the pits at this point to complete its planned door change, while the #95 and #97 Astons also came in, as did the Am-leading #98 car to get Paul Dalla Lana back behind the wheel. 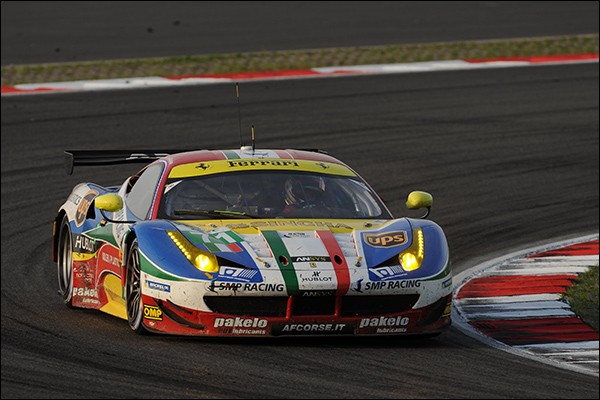 With 90 minutes to go, 27 seconds separated the two Porsches at the front of GTE Pro, with the third-place #71 Ferrari (above) the best part of a lap off the lead. Dalla Lana had a 10-second cushion to Bertolini in GTE Am, with Dempsey having dropped to fourth following his FCY pitstop. The #50 Corvette’s efforts were then hit with a 35-second stop-go penalty for speeding in the pitlane, ending any chance of it battling the #83 Ferrari for fourth in the closing stages.

A brief off on lap 129 showed the pressure Dalla Lana was under from Bertolini, with the gap down to just three seconds. The Italian veteran made clever use of an LMP2 car’s tow than the main straight to get past the Aston into turn one and was soon pulling out a gap in the lead of GTE Am. Further back in the class, a fine effort from Francois Perrodo in the #83 Ferrari saw him ahead of Dempsey’s Porsche as the final hour of the race approached.