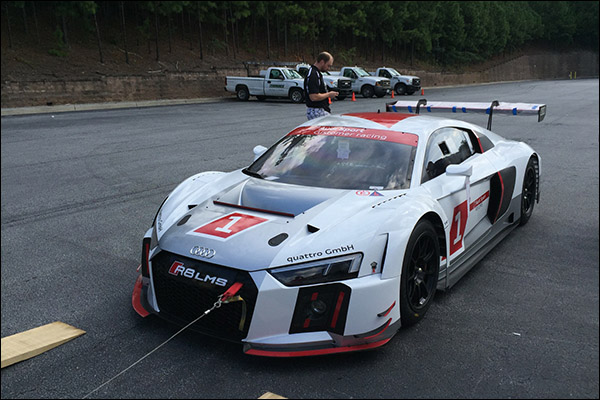 Two models that figure to weigh heavily in 2016’s GTD wars are in motion as the first of Audi’s brand-new R8 LMS has cleared U.S. Customs (above) and Porsche’s new 911 GT3 R turned laps last weekend at Sebring International Raceway in the hands of the Alex Job Racing team. The German cars could comprise a significant portion of the GTD grid once they’ve been tailored to the spec Continental tire used in the class.

“We just got the first R8 through and will have it at our shop in Indiana to get her ready for testing,” said Audi Sport Customer Racing USA’s Brad Kettler. “Everything we’re doing is geared towards testing immediately after Petit Le Mans.”

Based on the success of the current R8 LMS, Kettler expects the updated model to continue its winning tradition, and for quite a few Audis to take part in January’s Rolex 24 at Daytona.

“We’ll finish Petit with Paul Miller Racing and our support for any other Audi customers, then stay and get ready to run Monday, Tuesday, and Wednesday with the new R8,” Kettler added. “Wednesday will be done with a pro driver to get the car working with the Continentals, which I expect to go well. We’re in an exciting time right now for GT3 cars here in America, and we’re aiming for five cars at Daytona.”

Porsche’s outing with AJR, which made an early commitment to the 911 GT3 R on behalf of their customers, was done quietly after Multimatic completed their Sebring test with the 2016 GT Le Mans Ford GT, and more private testing is expected to be conducted this month with the rear-engine chassis.

More GT3 news has emerged in the last week as teams vying for the contract to run the factory Lexus RC F GTD program were notified a decision is expected by the middle of September.