Turner Motorsport has confirmed that it has ordered two BMW M6 GT3 cars which BMW Motorsport is on track to deliver by the end of this year in anticipation for the 2016 Rolex 24 at Daytona. The team will campaign two all-new BMW M6 GT3 cars at Daytona in the new homologated GT3 spec class of what will be the WeatherTech SportsCar Championship.

“We are super excited for the new M6 GT3,” commented Will Turner. “BMW Motorsport has been extremely busy with testing and development on the new car so I am confident when we get the cars they will be very well sorted out Will Turner added, “The initial testing with the M6 has demonstrated the new car to be very strong so we can’t wait to get our hands on these cars.”

Turner said he has yet to determine the final driver lineups for the cars.

“Once we go testing, we hope to nail down our 24 Hour at Daytona drivers as well as probable 2016 full season drivers for both IMSA and Pirelli World Challenge.”

With the 2016 WeatherTech SportsCar Championship schedule finalized, the preliminary budget has been determined for the 11-race season with the current 2015 race partners and sponsors like IHG Rewards Club, Alvarez & Marsal, Escort, Motul, H&R Springs as well as other longtime partners, allowing Turner to begin planning for the probable return and full-season effort with the blue and yellow BMWs.

In addition to likely return to endurance racing, the team is also in the initial planning stages to make a return to the Pirelli World Challenge sprint racing format with the new M6 GT3.

“Both IMSA and PWC season long programs for 2016 are shaping up and I hope that we will be able to make an official announcement in the near future,” said Turner.

“Since the M6 has not officially been released by BMW we took our best shot at coming up with an accurate rendering of the new M6 GT3 to show our fans what it may look like in the iconic Turner blue and yellow (pictured, ABOVE),” said Director of Marketing, Jay Baier. “Andy Blackmore did a great job with the artwork based off the images of the camouflage car.”

The BMW M6 GT3 features a longer wheelbase than the Z4 GT3 with a 4.4-liter twin turbocharged V8 (similar to street M5 & M6) engine rumored to exceed 500hp. The new platform will address the admitted shortcomings for the Z4 GT3, which struggled for top speed.

If the rumors are true, as many as three McLaren 650S GT3s could be competing in next year’s IMSA WeatherTech SportsCar Championship. According to K-PAX Racing team owner Jim Haughey, who partnered with Flying Lizard Motorsports owner Seth Neiman to form K-PAX Racing with Flying Lizard Motorsports, his pair of McLarens could form part of that equation.

With IMSA preparing to convert its GT Daytona class to full GT3 specifications in 2016, Haughey’s twin-turbo V8-powered McLarens would be eligible for the WeatherTech Championship in addition to the Pirelli World Challenge series where they currently compete. 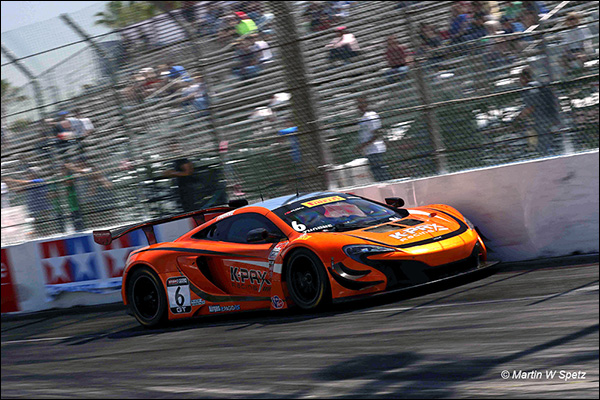 “At the end of the season we’re going to look at all options,” said Haughey.

“We are going to look at how we’ve done this past season in the Pirelli World Challenge. We’ll take a hard look at the WeatherTech series and see if there are opportunities for us there. If there is, we will probably take them.”

A season of sprint racing in PWC is less expensive than a full calendar of IMSA’s endurance races that range from two to 24 hours in length. The opportunity to partake in some of the IMSA’s world most famous sports car races at Daytona, Sebring, and Petit Le Mans is of interest to many GT3 owners as 2016 beckons.

For PWC competitors, in particular, there’s another consideration that could temper their enthusiasm: Moving from the spotlight in the SCCA-sanctioned series to somewhere below featured status in IMSA’s four-tiered championship.

“I still think based on budgets, we’ll have to look at what it cost in IMSA,” Haughey noted. “The only thing I do like about the split series that we are in, is we are at the top of the field. In WeatherTech, we wouldn’t necessarily be at the top. We would be down at the bottom of the totem pole. So that’s one advantage [in PWC].”

Haughey spoke prior to K-Pax’s withdrawal from the PWC event at Miller Motorsport Park. Prior to their bold exit from MMP, Haughey suggested a more expansive IMSA program would be facilitated by funded drivers and interested sponsors.

“I think there may be an opportunity [in IMSA],” he continued. “If there’s potential drivers out there that want to help with the cost, run the car in that series, that could be something that helps. If a sponsor came along and wanted to be in that series, that would also influence us. All those things come into play.”

The green flag has waved on the entry process for teams planning to compete in the 2016 IMSA WeatherTech SportsCar Championship. The earlier timeline, a full two months ahead of prior seasons, is the result of requests from teams and manufacturer partners eager to confirm their plans for 2016.

In addition to the debut of WeatherTech as the new entitlement partner, the season will see the introduction of full FIA GT3 specifications in the GT Daytona class and exciting new race cars in the GT Le Mans class in addition to a full complement of competitors in the Prototype and Prototype Challenge classes.

The IMSA Road to Daytona begins later this fall, with the first WeatherTech Championship test at Daytona International Speedway on Nov. 17-18. The annual Roar Before the Rolex 24 test will be held Jan. 8-10, 2016, followed by the 54th Rolex 24 At Daytona on Jan. 30-31. The twice-around-the-clock endurance classic will be the first event at the new Daytona International Speedway motorsports stadium upon the completion of the $400 million Daytona Rising project.

The 2016 season will feature a 10-race calendar for the Prototype class in the final year of its current technical configuration before shifting to new technical regulations beginning in the 2017 season. The GTLM, GTD and PC classes will have 11 races each as part of a schedule that includes a total of 12 WeatherTech Championship races.  The combination of event purses, special awards and year-end point funds will exceed $4 million.

Entry forms have been distributed to current TUDOR United SportsCar Championship race teams and also are available for download by new WeatherTech Championship participants within the competitor section of IMSA.com. Entries will be accepted for review, through 5 p.m. ET on October 30, 2015. IMSA will review and confirm the selection of entries based on established criteria for the 2016 season.