Father of the Chaparral line of race cars Hall will take part in a variety of activities throughout the event, most importantly holding the green flag duties for both the FIA World Endurance Championship and the IMSA Tudor United SportsCar Championship.

Hall built and created the concept of Chaparral racecars, one of the most innovative car designs of the 1960s, and at least one Chaparral from the permanent display in Midland Texas will be on display in the Grand Plaza for all race-enthusiasts and ticketed-guests to admire. 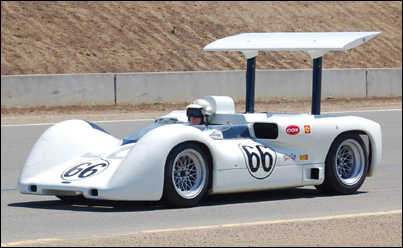 Also in the Grand Plaza, and continuing the theme from the earlier WEC rounds this year, there will be a Family Fun Zone, a Ferris wheel and Château COTA, a French Themed village that will include a wine tasting from Le Sommelier, crepes from Crepe Café, Coffee & Espresso.

Jim Hall will host an autograph session by his 2E Chaparral car in the Grand Plaza on Friday, Sept. 18 at 6:00 p.m.

Guests are also invited to purchase a Car Corral ticket package where they will receive a Multi-turn ticket to the event and an exclusive Parade Lap, granting them access to drive their own car around the 3.4-mile racetrack, led by Hall.