The Nissan GT-R LM LMP1 car is due to test here at CoTA for two days on Tuesday and Wednesday with a decision yet to be confirmed as to whether the car will return to WEC competition after Fuji.

Juan-Pablo Montoya is the latest high profile visitor to the WEC paddock, the Colombian Indycar star a guest of Porsche this weekend and revealing to WEC TV’s Louise Beckett that he follows the Championship closely “I watch all of the races. It would be very cool to get a chance to drive one of these cars!” 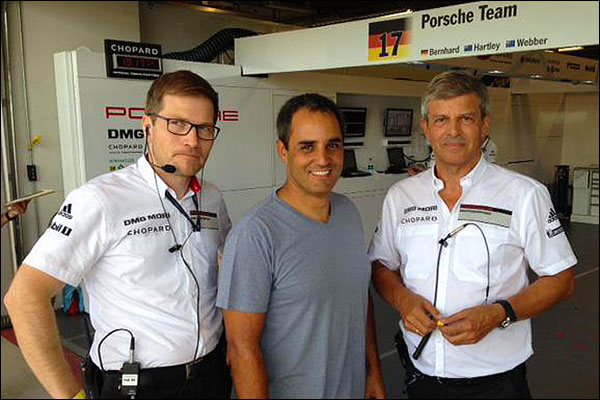 It looks very likely that he’ll get the chance after Porsche confirmed today that “Talks are taking place about a possible test,”

Jakob Ebrey also caught a moment with JPM and Penske’s Tim Cindric in the Porsche garage. Let the rampant and unfounded speculation commence! 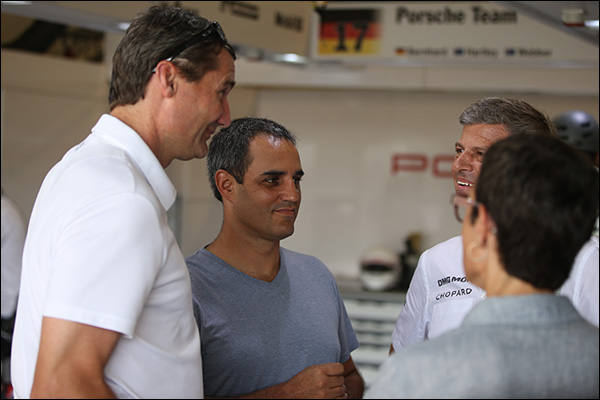 Montoya has several links into the team including contacts via his time with the BMW F1 effort, many elements of which were incorporated into the Porsche LMP1 start-up. He’ll turn 40 years old on Sunday

Montoya is also no stranger to endurance racing. With three overall wins at the 24 Hours of Daytona, his familiarity and aptitude in sports car racing is obvious. And as a winner of the Indy 500 and the Monaco Grand Prix, a victory at the 24 Hours of Le Mans with Porsche would see JPM join Graham Hill as only the second driver to win the three marquee events.

Nicolas Minassian is here too, the AF Racing ELMS racer looking at options for the year to come and keeping a weather eye on his friends and colleagues at SMP racing throughput the weekend.

We’ve heard a number of fan grumbles about a lack of PA commentary here at the Circuit of the Americas yesterday evening – the system falling silent less than 20 minutes into the night session despite the CoTA commissioned commentary team being in situ.

The schedule here this weekend is absolutely packed with the FIA WEC, TUSC plus a gaggle of IMSA support series (Continental Tire Sportscar Series, Lamborghini Super Trofeo and IMSA GT3 Challenge). Amongst the contenders in the Porsche one-make races is KCMG owner Paul Ip, he’s a regular racer and has contested the Porsche Carrera Cup support race at Le Mans too

Some minor excitement generated by a glimpse on TV of Mathias Bech with prominent Mazda branding on his overalls was explained by a brief conversation that confirmed this was in deference to some personal sponsorship with Mazda in Switzerland.