As expected, the attendance is quite impressive here on Saturday at Mazda Raceway Laguna Seca for Rennsport V. During the lunch break, it was pretty much impossible to get clear looks at the cars for all of the people milling. Maybe this will help pacify the whining county commissioners who are trying to bring in new management for the long time SCRAMP ran track. 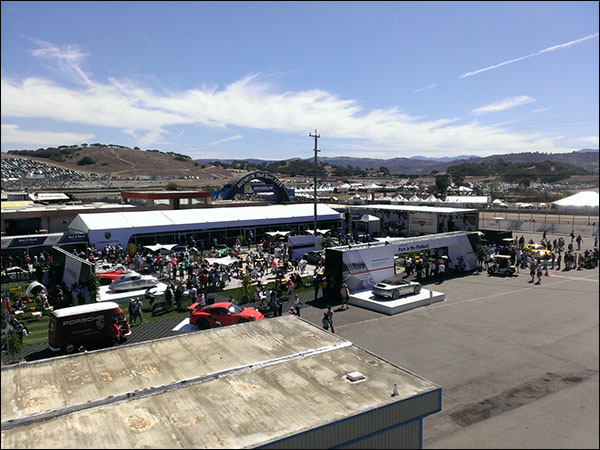 The weather too is exceptional, excepting the dryness for the locals. The news this morning confirms that yet another fire is in the region. This one appears to have been started as a suicide, this is a messed up world. 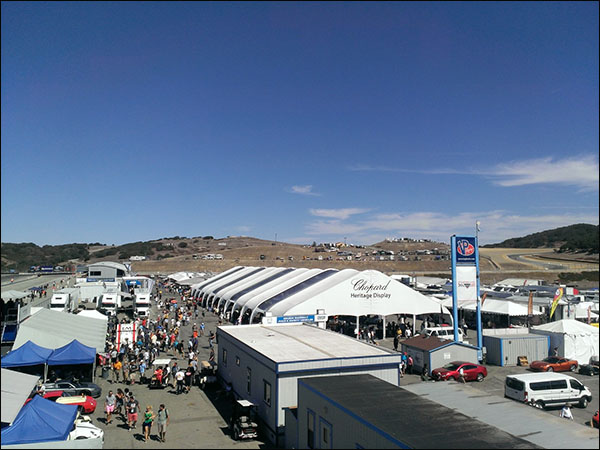 Back to the escapism stuff…

Tim is here and when we caught up with him, he was with his crew struggling to get his extremely low mile 924 GTS running correctly. “The car hasn’t really run all that much and we’re getting contaminants in the fuel system.” The crew was working to get the issue sorted so that Tim could join the Group 5 session for the morning. He did make it out on track to much better results, turning lap times nearly 10 seconds quicker than previous sessions. 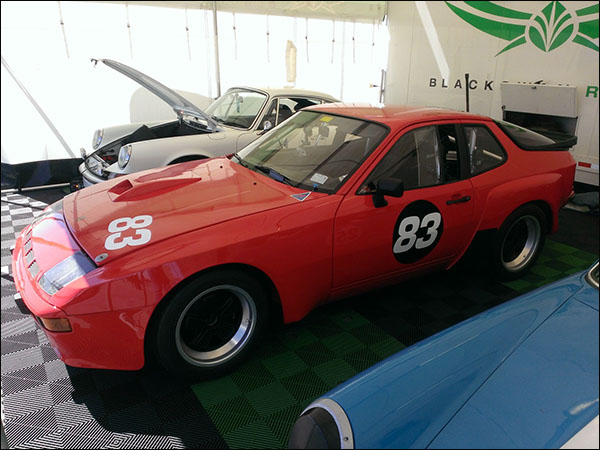 Tim did state that he is looking forward to his return to endurance racing with Porsche. “I’m eagerly awaiting the delivery of our Porsche 911 GT3 R. The guys are due to head to Weissach in November to build the car. We’re due to take delivery in early December and then it’s a push to get the car ready for the test and then Daytona.”

While Tim had success in the Pirelli World Challenge with his Mercedes and then a Viper, he is opting to sell those cars and concentrate on this new Porsche programme. “I just got fed up with the issues in the series, including the balance of performance. It may improve now with the changes that have come about, but by going with Porsche, I think I’m with a manufacturer that knows how to work through the BOP issues. I did enjoy the concept of racing in World Challenge but the issues just got in the way.”

Tim confirmed that Nicky Catsburg will be his co-driver for the upcoming Weather Tech season. The Dutch driver was a part of the winning driving squad for VDS that won the 24 hour race at Spa earlier this season.

Someone take his ticket please…

Inside the paddock, Porsche has set up a pavilion in which interviews are conducted, as well as the autograph sessions. During one of the interview sessions, the unlikely pairing of Hans Stuck and Brendan Hartley were on stage.

While the interviewer was talking with Hans, a gentleman walked up, sat down and asked the person on the bench next to him, “who is that up there speaking?” Really?

That should be grounds for not just having his tickets confiscated, but his Porsche owning privileges should also be revoked. Sheesh…

Tucked away in between some transporters was a legendary car, Porsche 962-101.

This car was the first Porsche 962 built and it was designed with IMSA in mind from the very begining. While John Fitzpatrick had raced his 956 a few times in the rejuvenated Can-Am series IMSA regulations forbade the 956 from competing. That car was designed with the drivers footwell in front of the front axle. IMSA stipulated on safety grounds that all cars must be designed such that the drivers feet would be behind the front axle line, but there are many that contend that this was just IMSA (meaning series dictator John Bishop) trying to keep Porsche out of the IMSA GTP class. 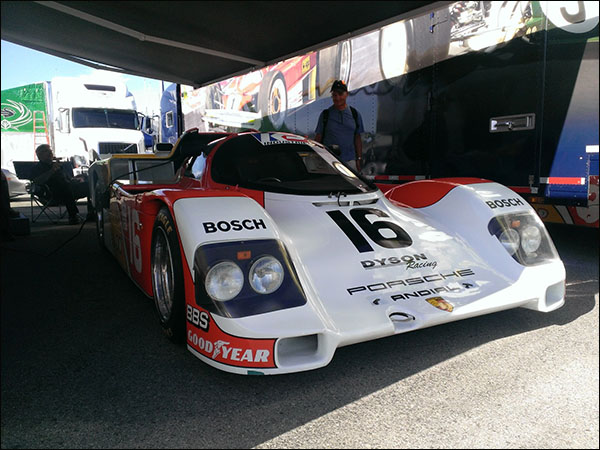 So Porsche re-designed the 956, lengthening the tub to accommodate the regulation and entered number -101 at Daytona in 1984 as a works entry. In plain white livery, the car was driven by Mario and Michael Andretti, but did not finish. 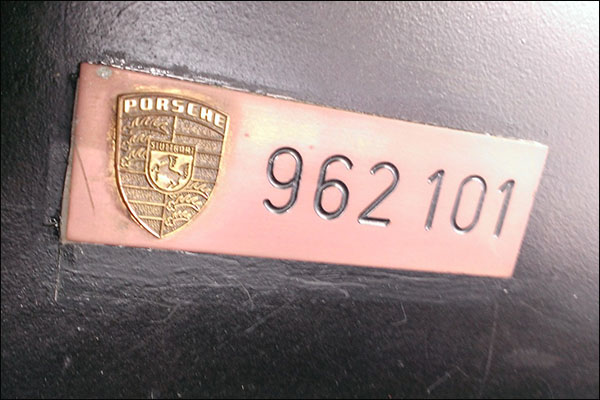 Being the first to place an order, it was Bruce Leven’s Bayside racing that took delivery of the car, but for the first two races this car was leased to Holbert Racing where Al Holbert and Derek Bell finished 2nd in the Riverside 6-Hour race and then Derek Bell drove solo in the 100 mile spring here at Laguna in 1984. After that, the car ran in various Bayside markings, finishing 2nd at the Watkins Glen 6-hour with Leven and John Paul Jr. driving.

Bayside sold the car in early 1985 to the then unknown Rob Dyson and his Dyson Racing team. Driven by the fast but inconsistent Drake Olson, the car won at Lime Rock in what was the inaugural Prototype class race for the team. The car won two more races for Dyson before being sidelined and replaced by a newer car. 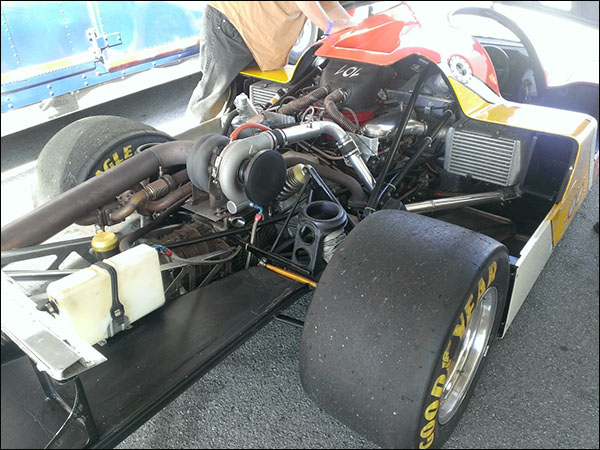 The car sat ignored in the Dyson shop for quite some time before it was decided to be repaired by a crewman in his spare time. The car doesn’t come out that much anymore, but for yet another Rennsport, Dyson opted to bring it here for display, in the same configuration in which it won at Lime Rock, complete with the original IMSA spec “long tail”. There was no intention to race the car, as it is not at all sorted, but none other than James Weaver gave the car a couple of laps.

While Wolf Henzler had the opportunity to enjoy himself in a superb tussle with the Factory cars at COTA, Bryan Sellers was forced to drive the Falken Porsche like a grandmother. His task was to save fuel.

By the calculations of the Derek Walker led team, they realized that due to the way the yellow fell, they (meaning Bryan) would need to make up 15 minutes of fuel in order to make the checkered flag, if the race went green the rest of the way.

“That was probably the worst stint I’ve ever had to drive”, stated Bryan. “I knew we had a great race car and was anticipating being able to really drive it hard. It didn’t happen that way. By short-shifting, lifting and in general taking it easy, we were able to conserve around .2 – .3 liters of fuel a lap and make it to the flag. Unfortunately we got passed by one of the factory cars, so we missed the podium, but it wasn’t because of the lack of effort.”

Henzler and Sellers have one more go in the Falken Porsche next weekend, as the team will attempt to win the GTLM class for the third time in a row. Looking at the forecast for Petit, there is a strong chance that they could pull it off. Rain is in the forecast for the event and we all know how strong the Falken tires have been in the wet…