Here we are, some 35 plus weeks since Daytona, heading into the final round of the 2015 United Sports Car Championship. I’ve just landed in Atlanta following my flight over from London, and Michael Valiante and I have a six point lead over the Action Express cars with just the ten hours of Petit left to run.

It has been one amazing year and while we’ve not always had the results we hoped, we’ve picked up two wins and kept ourselves in the hunt when it matters. Last time out at COTA was a perfect example of that.

The race a fortnight ago was intense, and to achieve third was a really good result for us. We’ve had some niggly issues with the car since Detroit that we’ve not been able to fix, and Michael and I have just driven through them as best we can. Those issues were magnified at COTA where the strategy we ended up running to didn’t suit the setup of our car; alas our hand was somewhat forced by the moves of our rivals. Keeping the Michael Shank Ligier behind us was vital and the fact we managed to do so and extend our slender lead as a result, that was the cherry on top.
Competition has never been hotter. I can testify it is now a lot lot harder to get a podium than it was last year or even at the start of this season. Ganassi has really made an improvement with the Ford and the Michael Shank car is now more than able of denying us points. That’s not a complaint, it’s a good thing.

Both 2013 and 2014 were difficult years for us, but we’ve come back stronger this year. The fact that only six points are separating the three Coyotes shows how even it is.

We’ve not had the fastest car this year, I think that is well documented, but the difference this season and the reason we’re leading the series into the final series is due to the incredible and often tireless work of the Visit Florida Racing crew. Troy Flis’ group of engineers and mechanics have worked so hard to fill the gaps and give us the consistency needed to run at a title. I’ve also got to give some credit to the Canadian section of the team, Michael Valiante. He’s really on it right now and we’re in good spirits ahead of Petit Le Mans.
Boxing clever: Getting it right when it matters

Talking to a friend recently I realised this is the first title fight I’ve been a proper contender in since 2009 when I won the FIA GT2 title (below in the Prospeed Porsche at Spa). A lot has changed since then, but my enjoyment of this feeling of ‘all or nothing’ hasn’t budged an inch. I’m still as hungry as I was in the Porsche days, and after five years and several close battles for Corvette, I’m very conscious I’ve not got a title to my name as a GM factory driver. It’s been frustrating at times that we’ve not had the consistency required to challenge for a title, but we’ve managed it this season and we’re right where we need to be. 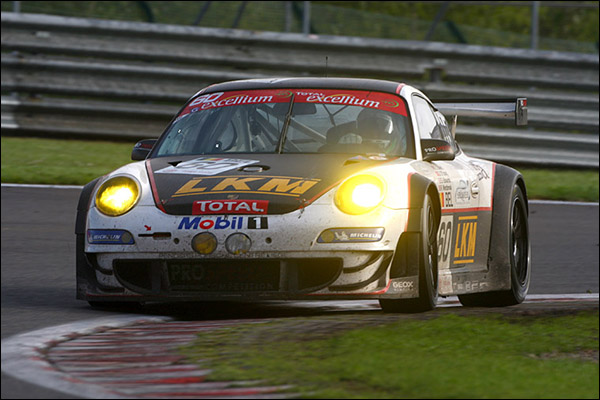 I’m coming into Petit feeling really good. Before COTA I spent eight days in Italy with my family and got a chance to relax and focus on my training. That really helped because it got pretty hot in Texas and these DPs aren’t exactly known for their driver-friendly cockpits, so heading to Atlanta in October, temperatures should be far more pleasant. Petit is just a fantastic track; I really enjoy it and it has always been a strong circuit for me, although the results haven’t always gone my way. It’s actually a very short lap compared to most circuits we go to, and the traffic tends to build up, especially when there are 40-odd cars on track.

Whatever the result on Saturday night, this season will have been a real stand-out for Visit Florida Racing. If we can do the job, which essentially means keeping the Action Express cars behind us, it will be a massive achievement for everyone at Visit Florida and Spirit of Daytona Racing. Troy and his crew rely so much on the support of the good people at Visit Florida and Chevy, and to beat the likes of Ganassi, Action Express, and Wayne Taylor Racing… I can’t overstate how big a championship win this would be, but we haven’t won it yet. I’m sure the championship is going to go down to the last hour of Petit Le Mans, which, from a fan perspective at least, is going to be incredible.