The #17 Porsche 919 of Timo Bernhard, Brendon Hartley and Mark Webber crossed the line first, heading a Porsche 1-2 in what was a frantic Fuji 6 Hours in each of the four classes. With the #17’s win, the crew now hold a one point advantage in the championship standings, team orders came into play at the end for that reason, the team denying the #18 crew the victory. 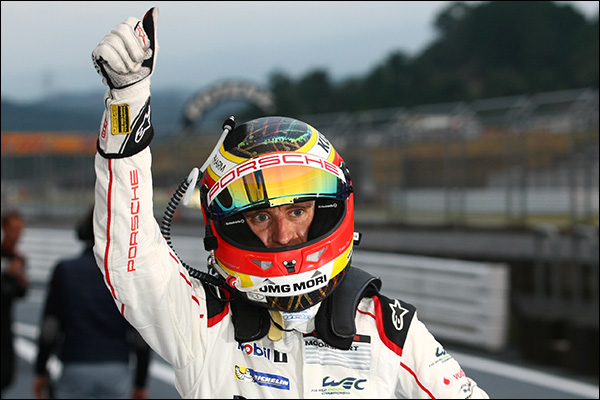 The conditions at the start heavily favoured Audi. With the first 40 minutes of the race being spent under safety car conditions, the heavy rain, mist and fog from the morning made racing conditions too dangerous with the visibility, particularly on the pit-straight, so poor.

When the race finally did get underway Audi immediately pounced on the two Porsches up front and took the top two spots the #7 leading the way. A mistake from Mark Webber in the pole-sitting #17 at Turn 2 send the car careering off the circuit, almost hitting the barrier; at the same time the sister car was smothered by Marcel Fassler’s #7 Audi and Oliver Jarvis’ #8 going through the first sector. Both Porsches were left having to fight their way back into contention.

The wet conditions allowed Toyota to stay in the fight for a while, holding up the Porsches on their way through, but ultimately, they still didn’t have the speed to stay around for long, and as conditions improved both slipped back.

Fassler built a healthy lead up front, but towards the end of each stint the Audis struggled for ultimate pace, and the #18 and #17 both managed to sneak through in the third hour with Romain Dumas and Mark Webber driving.

By that point the track was beginning to dry as the clouds lifted, and tyre choice became crucial. That was where the race was lost, as Fassler found himself battling hard with Webber who was suffering from torque issues for multiple laps before getting out of the car. Audi changed to slicks first with the #7 – the #8 had fallen back to fourth – and it didn’t work so the team pitted the car immediately once again, losing two laps over the leading Porsche which was lapping extremely quickly at the head of the field.

The #8 would then slot into third place right until the final moments when like Porsche, Audi would switch the two cars for championship points. The #7 came home a distance third a lap down, with the #8 fourth two laps off.

Toyota finished up in their normal fifth and sixth spots, with Rebellion’s #12 R-One seventh, representing the first of the privateer runners. 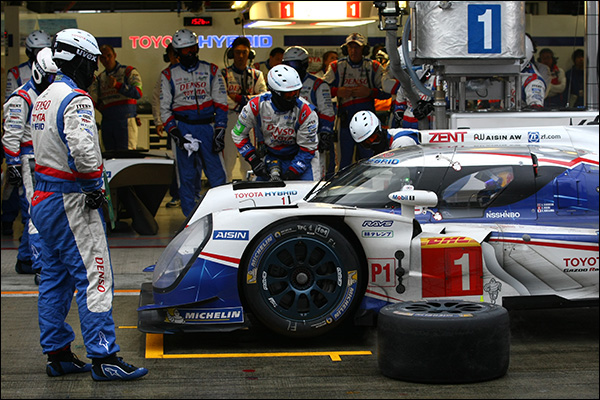 LMP2 may well have been the most enthralling action on track. The #26 G-Drive Ligier, of Romain Rusinov, Sam Bird and Julien Canal came home first in class after an almighty battle for the lead with the KCMG crew who unfortunately retired after a controversial incident in the final minutes of the race.

Early on, Signatech held the lead with Sard Morand close behind. In the wet weather, Paul Loup Chatin in the Signatech Alpine was sublime, but it along with the Sard entry would fall back in the order. The Alpine didn’t have the pace, and Oliver Webb lost a lap after having to stop on the escape road at Turn 1 after going straight on.

It them became a race between the leading G-Drive car and the KCMG Oreca. Nick Tandy’s opening stint in the KCMG car set the team up for a win, despite a few small mistakes by the Le Mans champion. During each stint the cars traded the lead at each pit stop, until the final hour when they came together on track.

The fighting was fierce between Romain Rusinov in the #26 and Richard Bradley in the #47, two two battled hard, with only a small bit of contact before Bradley had to come in for a final splash of fuel.

“We have only a second and a half between us,” said Bradley’s teammate Matthew Howson at the start of the final hour.”But I hope there won’t be anything dirty between us and G-Drive who have been quick all weekend, I have 100% faith in Richard.” Sadly for everyone involved, the end result wasn’t clean.

After Bradley’s splash, he ended up right in front of the #28 G-Drive Ligier, Gustavo Yacaman a lap down at that point, in third place on track during a Full-Course Yellow period. When the action went green, Yacaman was all over the Oreca, turning the #47 into a spin that required another quick stop. When Bradley rejoined he was in close proximity once again with the #28, this time for position with rather too much aggression on display, some from the Englishman, rather more it seemed from Yacaman, The pair rubbed doors on multiple occasions, but the final on track act saw a double hit to the rear of the Oreca from the Ligier, the first tap unsettling the KCMG car with an almost immediate, and much harder hit that turned the car around and straight into the barriers, major damage to the front end, Bradley tried to rejoin but got little further – Yacaman continued whilst Bradley, thankfully unhurt apart from a sore foot after a major shunt, dnfed. The #28 car finishing third behind a fine effort from the finally fortunate Signatech Alpine team.

It was a real shame, after such a sterling effort by Tandy, Bradley and Howson, and after so much clean racing in the class throughout the race. KCMG retired and G-Drive took up two spots on the podium with the Apline splitting them and finishing second. Nobody would be surprised if the officials have a say in the final outcome however, DSC believe that whilst on incident between the #26 and #47 has been deemed no further action, there were a further six involving both G-Drive cars and the #47 currently under investigation. 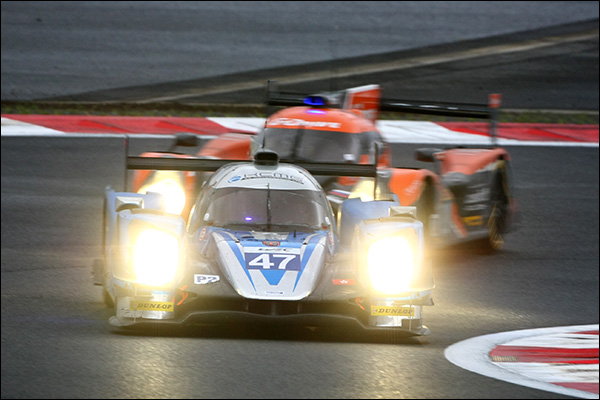 GTE Pro saw AF Corse score its first class win since Silverstone, with the #51 of Gianmaria Bruni and Toni Vilander – after a few poor outings – driving faultlessly all the way to the end and taking the win.

Initially it was all about the sister #71 AF Corse Ferrari of James Calado, but as the conditions improved, so did the Manthey Porsches behind, who took the class lead during the race’s middle portion. The #92 and #91 both shared the lead at various points before the #51 came storming through the pack and took the lead. 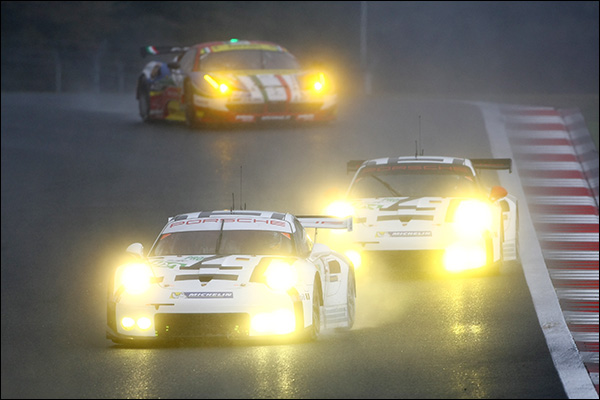 Neither Vilander or Bruni put a wheel wrong, and that was the difference as a few costly spins from the other contenders prevented them from being in with a chance at the end. The #51 came home over a lap ahead of the #92 in second which under the influence of Patrick Pilet stole the place of James Calado in the final few minutes after a clean, fair and exhilarating scrap. The #91 came home fourth, with the three Aston Martin entries lagging behind, almost nowhere to be seen in the race.

GTE Am wasn’t a thriller past the second hour, but it was an impressive show of force by the #77 Dempsey Proton crew, that scored its first win in the series. Marco Seefried propelled the team to the top spot in the class during his first stint behind the car, with Patrick Long and Patrick Dempsey safely bringing the car home.

Stuart Hall led the early portion of the race in the #96, after a magnificent bit of driving in the wet to take the lead off a pair of menacing Ferraris, but when he handed the car over to rookie Liam Griffin, it slipped out of contention.

The #98 Aston of Paul Dalla Lana, Pedro Lamy and Mathias Lauda crossed the line second with the #83 AF Corse Ferrari of Rui Aguas, Francois Perrodo and Manu Collard rounding out the top three.

After fears of a repeat of 2013’s red-flagged event at the start, the race at Fuji turned into a memorable one, for some right, and some wrong reasons. With two rounds to go, there’s still so much to play for, but ultimately, after proving itself yet again against its competition, it’s most definitely advantage Porsche heading into the penultimate race at Shanghai.