GTE eventually was about one story, and it was bigger than the title win and auto entry for the excellent season long efforts of Formula Racing.

For any team to take their season debut win is a fairly big deal, to do it on the last appearance in competition for both a car and a team makes it particularly poignant.

Marc VDS Racing’s BMW Z4 GTE added welcome variety to an ELMS grid that has all too often been dominated by Ferrari, the reality is though that the team has had good and bad days at the ELMS races in broadly equal measure. 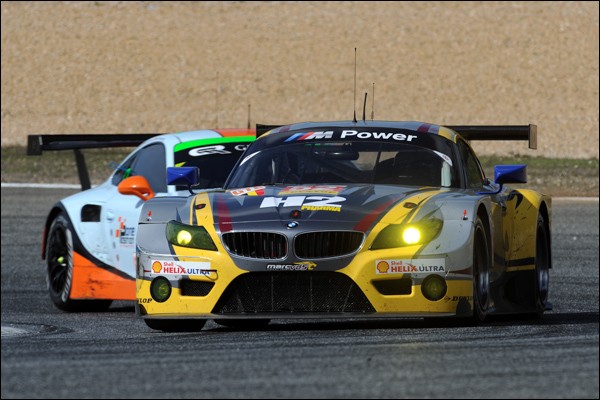 Coming into the final race a title challenge wasn’t out of the question but realistically it would have to be a VERY bad day for the consistent force that has been the Danish Formula Racing squad.

To even get close though there would have to be a good day for the soon to be defunct Belgian BMW squad and two excellent stints ensured that the day went as well as could have been hoped.

After a qualifying roll of the dice that came up double zero the #52 BMW started from the back of the grid with Henry Hassid taking the start. Right from the off he was on a tear and making more than solid progress, into the overall GTE fight within a handful of laps. He continued to push hard too, keeping the car in the mix until it was time for Andy Priaulx to take the wheel.

It was the British BMW factory man that was at the wheel when the rain came and he, with a handful of others, made the call to tough it out on slicks. It was the right move and after a nervous part stint the track began to come back to the slithery several, the pace came back into the track and the BMW was back on the pace, but had lost no time in the pits whilst others had pitted at least once, and in some cases twice.

Other cars were in the mix too but a fine early race leading run from Rory Butcher in the #66 JMW Ferrari, backed up by probably the best run so far from Rob Smith came to naught as the team’s not so secret Estoril weapon, Factory Ferrari man, James Calado took up the chase only to almost immediately lose drive. 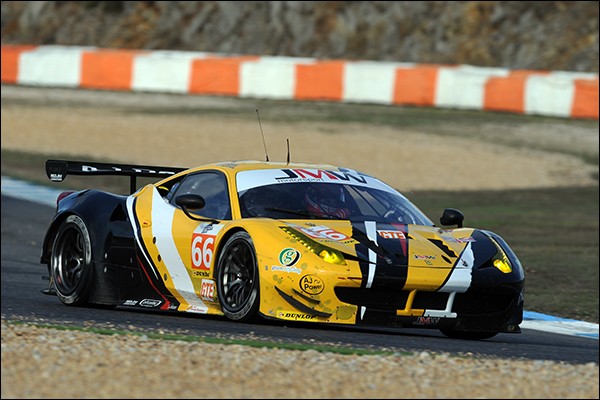 An effort that looked likely to be more than capable of producing a race winning run was done on the spot.

The #88 Proton Porsche was in trouble early on after a clash with the #68 Massive Motorsport Aston, rear eft suspension damage put the car out of the running. 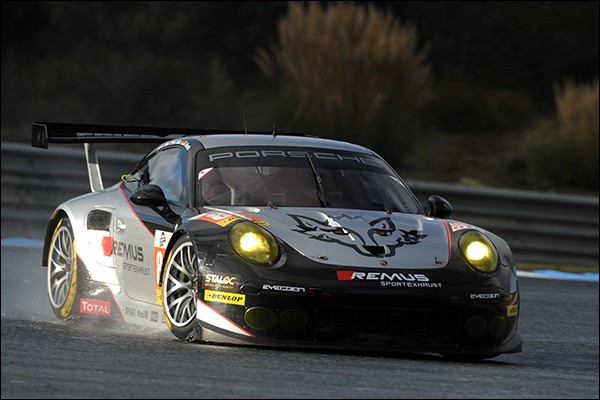 There was effort ruining contact too for the #51 Ferrari, Peter Mann and James Winslow’s clash ending the effort of the AF Corse car.

The #56 AT Racing effort never really found form and the #60 Formula Racing Ferrari run was troubled too, but the real stumbling block to real pace from the Danish/ Italian combo was their correctly conservative pursuit of the title.

They needed to come home sixth to be sure, their eventual fifth was lip pursingly close but safe, they’ll be on the 2016 Le Mans 24 Hours grid with a Ferrari 458 in LMGTE AM, Mikkel Mac and Johnny Laursen already confirmed. 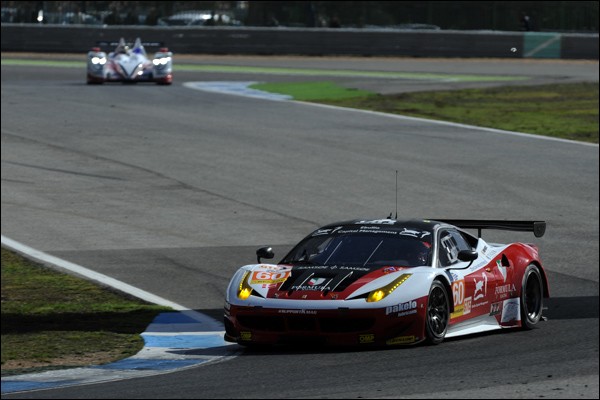 That left Matt Griffin chasing a podium place after a relatively off colour run for the usually more pacey #55 AF Corse effort. Even the pace of the Irishman couldn’t get there this time, #55 falling short of the second place required for an Auto Le Mans entry. 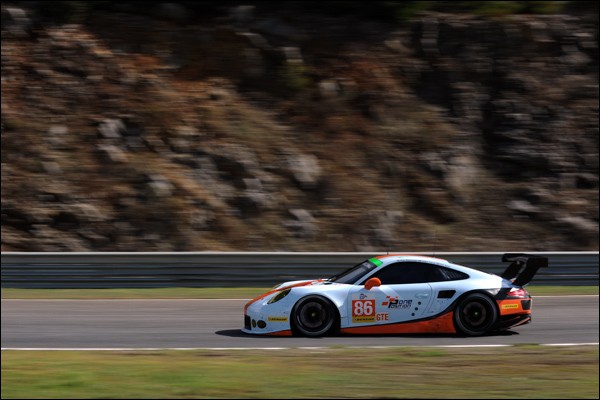 Ahead of them came a season debutant, and a likely full season 2016 player as the #99 Aston Martin Racing/Beechdean Aston V8 Vantage GTE of Alex MacDowall, Jonny Adam and Andrew Howard scored second place. 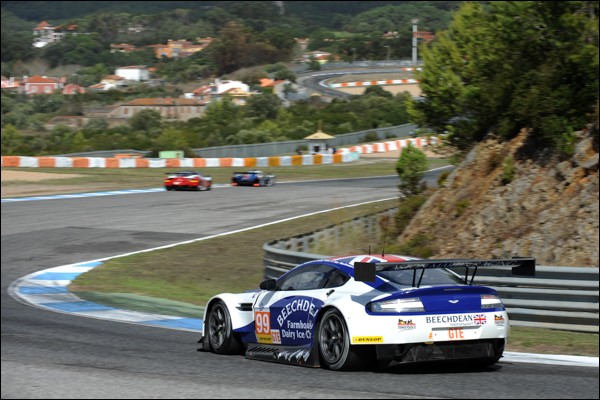 Howard knew the step up to GTE from GT3 was a big one and the team toughed it out to grab a very creditable second in GTE. His car’s involvement secured a first ever GTE podium in the current iteration of the ELMS that did not feature a Ferrari!

That left the Marc VDS team to take a well deserved win and second place in the Championship, cue a further question to which there is, at present, no answer – Second in the Championship attracts an auto entry for Le Mans. Might Marc VDS be tempted back for one more run? 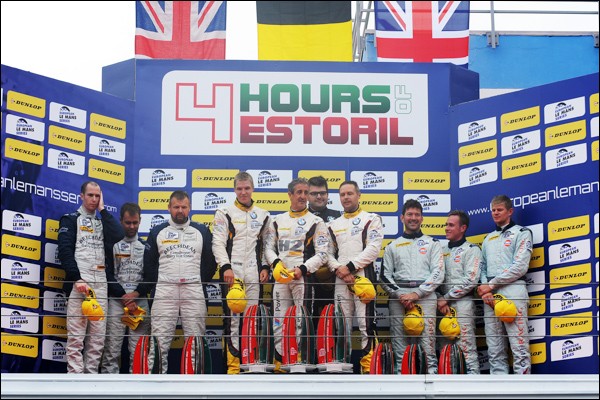 GTC too saw a first time winner in the last GTC race in the current ELMS timeline, the #63 AF Corse Ferrari squad toughing it out to take top spot as others faltered. 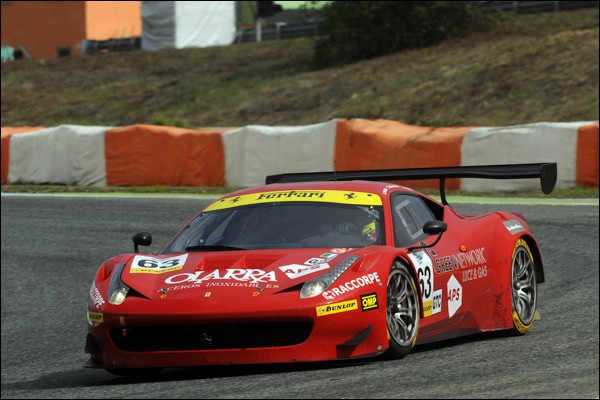 Marco Cioci putting in a storming final stint to back up solid work from Giorgio Roda and Ilya Melnikov as the Ferrari squad took advantage as others played more conservative cards. 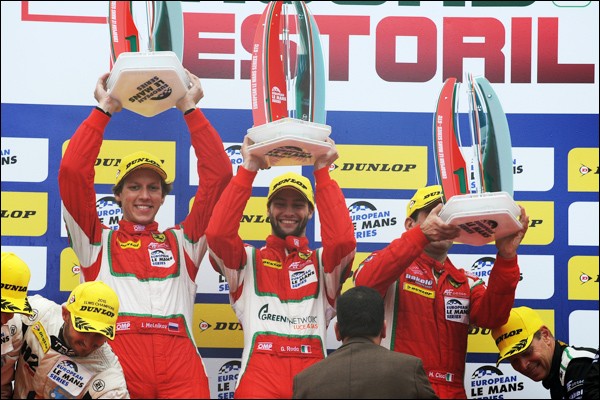 The TDS BMW too had a healthy points lead coming into this one and looked unlikely to falter, second place after a solid run here was copybook title clinching stuff, and richly deserved for Eric Dermont, Franck Perera and Dino Lunardi. 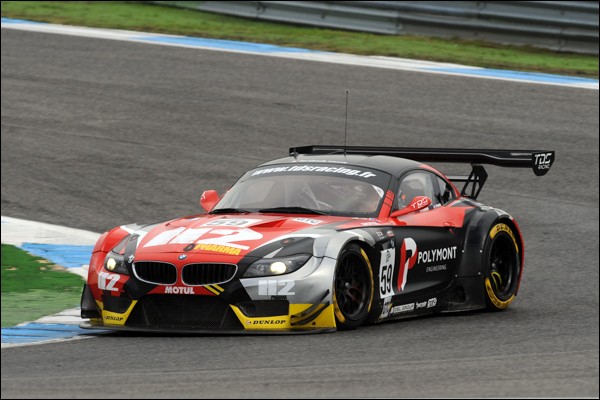 Amongst the other runners there was troubled day for the #68 Massive Motorsport Aston Martin a couple of contacts an then the day was done for the V12 Vantage, stopped on track and out.

Estoril saw the introduction of the #77 TF Sport Aston Martin and Euan Hankey led, and led well in his opening stint. Salih Yoluc though had more troubles when he took over, on track incidents and a pitlane penalty dropping the car down the order with Richie Stanaway. unable to recover enough of the lost time to make a telling difference to find the podium. 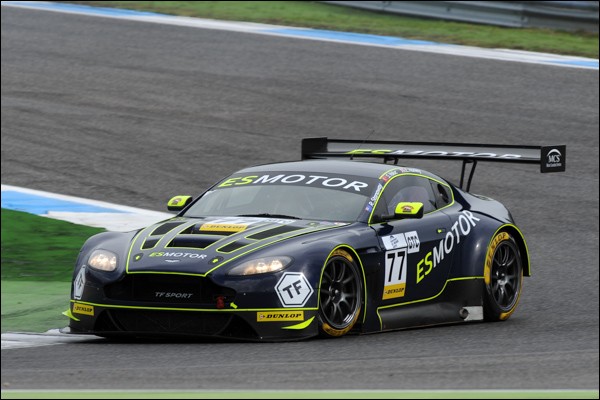 The remaining podium slot went to the #64 AF Corse Ferrari after the title challenge from the sister #62 458 faltered. The Art car of Mads Rasmussen and local drivers Felipe Barreiros and Francisco Guedes coming home a lap ahead of Stuart Hall, Francisco Castelacci and Thomas Flohr.