The astounding year on year increase in LMP1 pace continues, the fastest qualifying lap today by Brendon Hartley, a 1:42.6, was some 5.6 seconds faster than the previous average lap record, set in 2013 by Toyota. Toyota themselves broke their own record by around 2.5 seconds, only to finish the session fifth and sixth on the grid!

Perhaps even more astonishingly is that the Hartley lap was just 4 tenths off the fastest race lap in this year’s Chinese Grand Prix, a 1:42.2 by Lewis Hamilton. The F1 cars were much faster in qualifying but tyre management here in Shanghai means they were forced to run a much slower race pace. 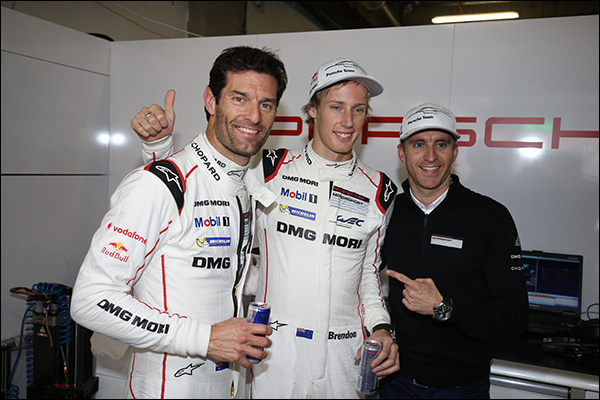 Hartley and Webber may be team-mates on track this weekend but for an hour or two before tomorrow’s 6 Hours of Shanghai they’ll be on very different sides.

In what will be shock news to England fans who will have considered the competition over some weeks ago, the 2015 Rugby World Cup Final apparently features Australia and New Zealand with Mark Webber donning the yellow shirt of Australia this evening and his young colleague Brendon Hartley dragging his emergency All Blacks shirt (a legal requirement in the baggage of all New Zealanders we believe) 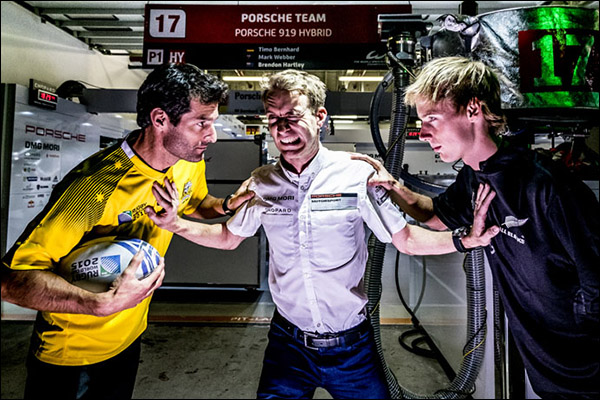 Happily they have Timo Bernhard to keep the apart if things get ‘difficult’ though Timo will be distressed to hear that this is one contest that the Germans won’t be able to win on penalties!

The sister #18 Porsche’s technical issue in this morning’s Free Practice 3 was a broken throttle linkage, the team opted to effect an engine change prior to qualifying.

Whilst there are titles to be won tomorrow there are also WEC racing records to establish. The most ‘winning’ marque in the Championship’s near 4 season history is still Aston Martin with 22 wins spread between GTE Pro and Am. Ferrari are just one win astray of that total on 21 with Porsche on 18 (but contesting three classes!)

Should Matheo Tuscher make his planned debut in the #13 Rebellion the 18 year old will become the youngest LMP1 driver thus far in WEC history.

In addition to the build of a trio of new Ligier JSP2s relayed to DSC at Estoril Onroak Automotive expect there to be a further pair of cars available for sale or lease next year after release from an existing customer!