6 hours of racing around Shanghai International Circuit saw Porsche take the Prototype Manufacturers World Championship, the #17 Porsche crew take the race win, Rebellion Racing and Mathias Beche and Nico Prost take the LMP1 privateers race and Championship wins and major drama again both at the start and at the very end of the LMP2 encounter which saw Signatech Alpine take the race win ahead of the Championship leading #26 G-Drive squad with KCMG third keeping their title hopes alive

In GTE Porsche took the win in the Pro class giving Richard Lietz a real edge in the Drivers title chase and closing the Manufacturers Championship to just 4 points.

Topsy turvy stuff in GTE Am saw early misfortune and misadventure for SMP Racing fail to win the title here, a first win too for AF Corse’s #83 squad sees them take the title fight to the wire.

The race started in wet conditions under the Safety Car with Porsche again looking quick, the #18 car getting away better from the grid but Marc Lieb and Andre Lotterer tangled when the Porsche man gave the team car some racing room. That left the #18 to fight back from the very back of the field as Lotterer tried and failed to get onto terms with Brendon Hartley. 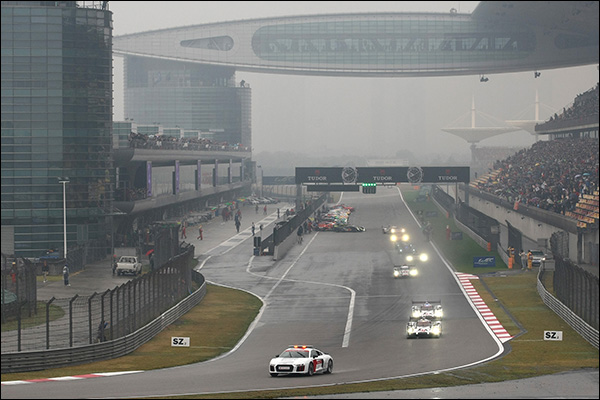 All the weather forecasts had predicted a drying track after an hour, it took WAY longer than that and the race became a tale of when to change rubber and to what.

Audi had to make the braver calls and it almost paid off more than once, a slower drying track than everyone thought though meant that Marcel Fassler simply couldn’t exploit his intermediates vs the Porsche’s full wets sufficiently to close the gap.

The #18 meanwhile had mounted a fightback and was back in the mix, Audi’s move to slicks brielfy again looked like it might make an impact but the Porsche squad’s ability to maintain pace on their worn wets, then an inspired tactical move to get the #18 back on track ahead of both of the Audis at the final stop proved the killer punch, Porsche 1,2 and the #17 crew a 12 point advantage in the driver’s standings to take to the season finale at Bahrain. 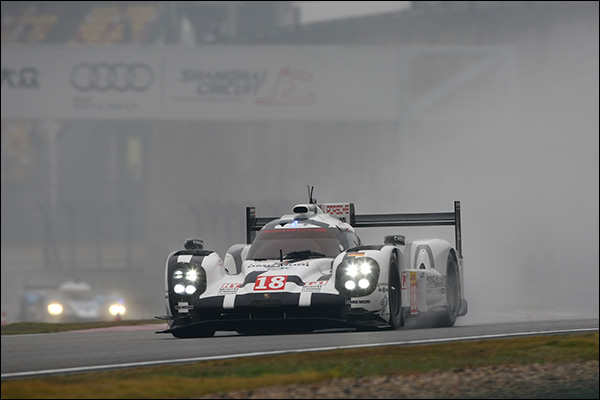 LMP1 Privateer saw less incident that usual until the closing stages when first the #12 R-One, Mathias Beche at the wheel, hit the wall hard after losing the rear end over slippery kerbs, the car damaged front and rear but getting back to the pits where the Rebellion crew got the car back out (under Full Course Yellow) without losing its lead (3 laps at the time) to the ByKolles CLM. 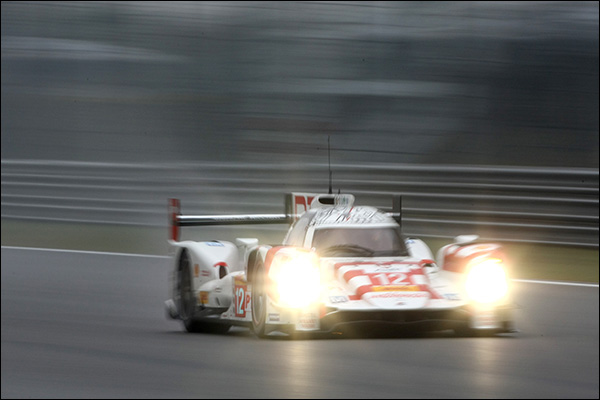 Right at the end of the race new boy and youngest ever WEC LMP1 starter Matheu Tescher had a good run ruined when the #13 car pulled off the circuit with a fire at the rear, It will be a tough transition to Bahrain for the team with the confirmation of the teams and drivers championships to ease the blow!

LMP2 saw Nick Tandy stumble in the opening moments, the #47 KCMG man losing the car on the slippery track and sliding backwards into the gravel losing the car a lap and seemingly any hope of taking the title fight to Bahrain.

The G-Drive pair though didn’t have it all their own way, thanks to the early wet conditions the Michelin shod Pegasus Racing Morgan in the hands of Alex Brundle was quickly up to second, and when the rain came down again the #29 was through to build up a convincing lead, a great comeback from the young Brit. 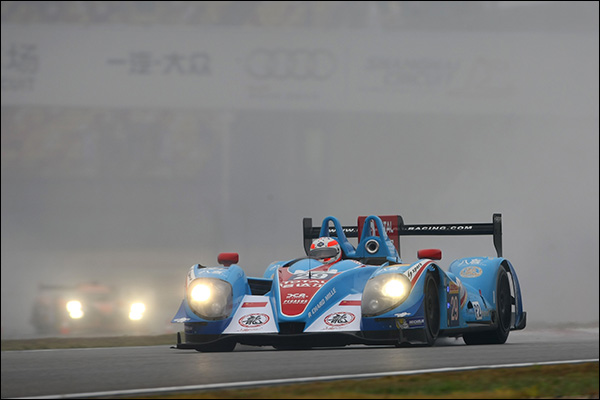 Pipo Derani took the lead in the #28 G-Drive Ligier with the #26 a little way back in the pack as the conditions favoured the GTE Pro cars that formed a mixed pack with the Prototypes until the track finally started to dry properly in the last couple of hours.

Ryan Dalziel led the race briefly for Tequila Patron ESM and the car stayed in contention with a competitive run from David Heinemeier Hansson until a gearbox issue put the car out, the first retirement.

The SARD Morand Morgan again showed well with Oliver Webb in the mix. Into the final phase of the race the Signatech Alpine #36 was on the move and Paul Loup Chatin took the car into the lead before handing over to the second WEC debutant of the weekend Tom Dillmann.

The ex GP2 race winner and German F3 Champion has been a controversial Silver ranked driver and after some initial inroads into the Alpine’s advantage (after Gustavo Yacaman served a drive through for an earlier Derani contact on the #88 Porsche to cede the lead to #36) the Frenchman drew away steadily from the Russian, Sam Bird later unable to redress the balance leaving the #36 to score a fine first win in the WEC.

Behind though there was a recovery drive underway from KCMG, Matt Howson holding station in the worst of the weather then Richard Bradley, and Nick Tandy attacked the task in hand, making big inroads into the gap that counted, to the #26.

Between the two though was the #28 and in a deja vu period it was the two major protagonists from Fuji again contesting third position, effectively to keep the Championship alive. It looked for a while as if Tandy could close down Gonzalez, but a late Full Course yellow ate up valuable minutes and the battle seemed lost. On the penultimate lap though, and with third place seemingly secure, the Mexican slid wide and into the gravel at tricky Turn 2, too late for recovery and non, scoring, the KCMG car inheriting third, taking the title fight to the wire and eliminating the #28 from the last round title battle! 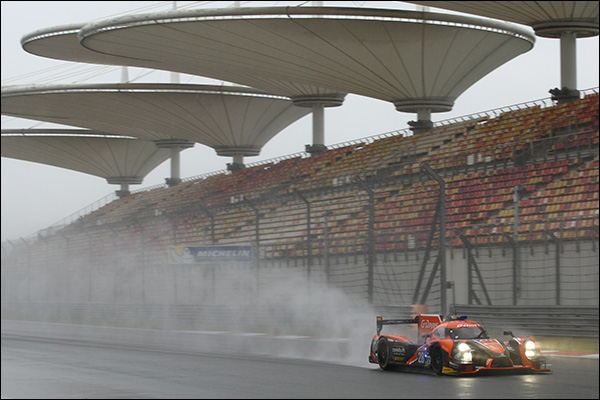 In GTE Pro is was a fine effort from the leading cars, all dealing well with the tricky conditions and getting stuck in to the LMP2s. Richard Lietz used the Porsche’s superior traction to get to the lead and, aside from a brief tussle with the team car, before Fred Mako slid wide and lost time and track positions, the #91 car was relatively untroubled. The win for #91 saw Lietz’s slim Drivers championship lead extended and Christensen move ahead of the Ferrari opposition. 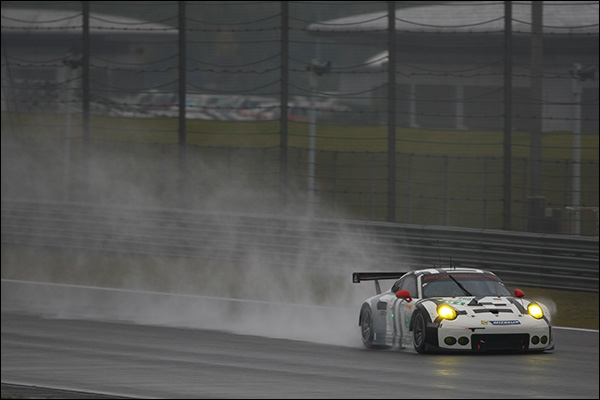 Indeed at times it ran ahead of most, and on one occasion all, of the LMP2 pack only ceding positions to the prototypes as the track dried.

Toni Vilander drove another iron man race to secure second with Gimmi Bruni to keep the #51 in with a very slim mathematical chance of the Drivers title but third for the recovering #92 and fourth for the #71 Ferrari means that the title that matters for most, the Manufacturers World Championship, goes to the wire with just four points separating Ferrari and Aston Martin.

In GTE Am the Aston martins ran 1,2 for a goodly proportion of the race, the Vantages working well in the rain. 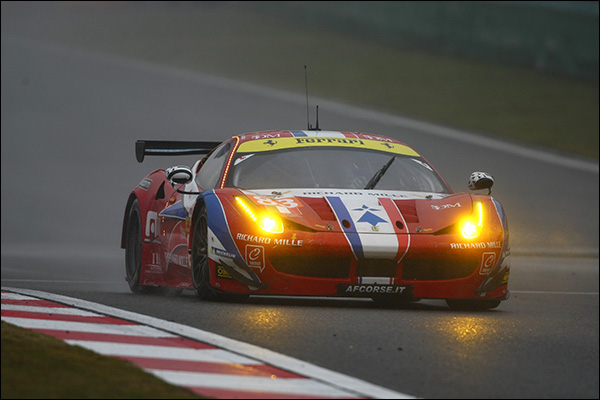 The #96 run was ruined after a late race problem for the car saw it off track with Liam Griffin, after mounting a fine defence of his position from Andrea Bertolini, perhaps taking a little too long to realise that the car could be recovered to the pits.

The SMP Racing Ferrari could again take the title here but again failed to do so after multiple incidents dropped the car to the back of the field in the early stages.

Thereafter though there was a fine recovery drive, the #72 getting back to finish third but with the #98 Aston pipped to the win by the first time winning #83 AF Corse Ferrari that title too goes to the wire in Bahrain.

Kudos not only to Manu Collard, who led the class early on, and to a fine, eventually decisive showing from Rui Aguas, but also to Francois Perrodo, the Frenchman one of the nicest guys in the paddock, and one of the most improved drivers through the year too – The points position indicates that SMP should take this but to finish first…. 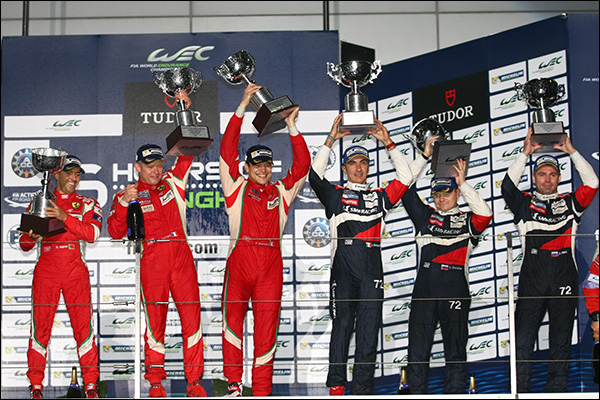 All in all another very good 6 hour WEC event, the weather played its part, as did good luck. But great driving, good strategy and a world class grid again shone through. Roll on Bahrain!