The SEMA show in Las Vegas saw the Pirelli World Challenge with a major presence and their annual ‘State of the Series’ presentation.

“We believe the 2015 Pirelli World Challenge season was the greatest championship season in the series’ 26 years and the 2016 season will be bigger and better,” said Greg Gill, Pirelli World Challenge President and CEO.  “Our confirmed schedule has some of our traditional dates as well as the addition of Lime Rock Park on its historic Memorial Weekend. Working with the Verizon IndyCar Series has been a tremendous relationship and we look forward to sharing six weekend events in 2016 along with our five PWC headliner weekends. The 2016 Pirelli World Challenge is shaping up to be another thrilling and competitive season.

“Competition Director Marcus Haselgrove and his team have been working tirelessly to streamline rules, and forms while enhancing the at-track experience for our competitors.”

Haselgrove announced the following competition and technical changes for the 2016 season: GT/GTA and GT Cup races will begin with rolling starts, and the plan to integrate more GT4 homologated platforms like the Maserati GranTurismo and the KTM X-BOW in the GTS class. 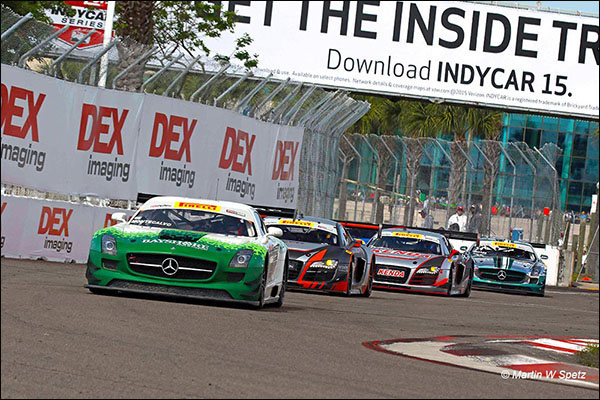 “We have streamlined the 2016 Rule Book, worked closely with teams and manufacturers since the checkered flag at Mazda Raceway in Mid-September and we will be adding to our competition and technical team in the coming weeks,” noted Haselgrove.

The alliance is today confirmed with the announcement of the first GT3-only endurance race in North America with a six-hour race at the Circuit of the Americas scheduled for March 5, 2016. Independent from the Blancpain GT Series in Europe, the race will be part of the planned Intercontinental Challenge, which will bring together the Liqui Moly 12 Hours of Bathurst in Australia, the Total 24 Hours of Spa in Europe and the 12 Hours of Sepang in Asia; all races where a GT3 class will be the overall winning class. The US round will also be open to GTS/GT4 cars. 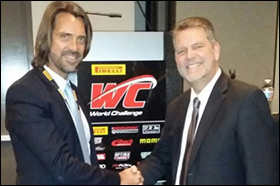 The alliance will also see the two sports car racing series utilizing similar technical regulations including the SRO Balance of Performance equations and other selected particulars such as consultancy on Sport and Development.

“Working with Stephane Ratel and his SRO Motorsports Group has been outstanding,” said Gill.  “Since joining PWC Marcus Haselgrove has worked closely with SRO’s technical department in an open forum with the GT3 regulations and we believe the collection of GT3 cars at the season opener at COTA could be one of the largest in sports car racing history. Fans will now see a global mixture of PWC and SRO GT teams and drivers racing together. It’s a great way to kick off the 2016 season.”

“Extending the SRO-monitored Balance of Performance to the Pirelli World Challenge, in addition to the many series and events which already adopted it around the globe will give manufacturers and teams the assurance of a professional and fair competition which is not based on the relative performance of teams and drivers in a particular series but solely on the cars’ performance, measured across 40 circuits on four continents,” said Ratel, President and CEO of the SRO Motorsports Group.  “The fact that most of the monitored Series and events run on the same Pirelli tire specification will add to the accuracy. Working with Greg Gill and his team on this and on other aspects of the Series is a great honor for SRO. We are looking forward to a 2016 season which should mark the beginning of an even closer collaboration.”

In the address at the SEMA Show today,  Pirelli World Challenge officials also confirmed the television package with CBS Sports Network that will include a live race broadcast for the 2016 season, as well as the expanded relationship with Motor Trend OnDemand TV.

As in 2015, CBS Sports Network will telecast the remainder of the 2016 Pirelli World Challenge events on a taped-delay basis with 120-, 90- and 60-minute presentations. Details on the CBS Sports Network viewing schedule will be announcement in the near future.

“Our relationship with CBS Sports Network last year was an excellent start and we are very pleased about the television schedule for 2016,” said Gill.  “They captured some of the best wheel-to-wheel sports car action in the world last season with tremendous in-car footage and superb camera angles.  We look forward to more of the same in 2016.”