Two-time Hankook 24H Dubai SP3 class (GT4) winners and reigning SP3 class champions, Optimum Motorsport have today announced the line-up with which they will begin their maiden challenge for A6 class (GT3) honours at the Middle East race, which acts as a curtain raiser for the 2016 season.

Utilising the recently delivered second-generation Audi R8 LMS GT3, one of the first customer cars to be produced by the German manufacturer, the Wakefield (England) team will field a strong line-up with significant endurance and Dubai-specific know-how. Heading the driving duties is work-Audi star, Frank Stippler (GER). 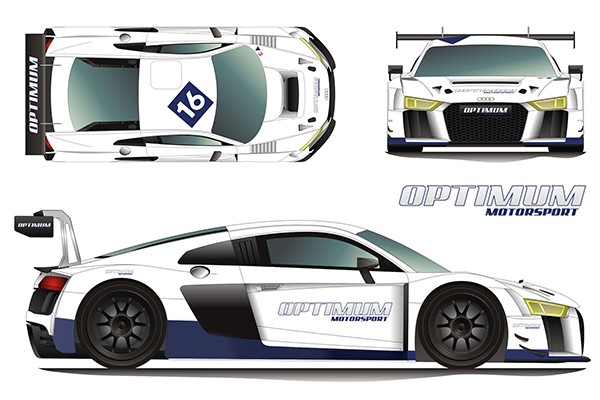 He will be joined in the Optimum Motorsport Audi by rising British star, Joe Osborne and the talented British duo of Ryan Ratcliffe (GBR) and Flick Haigh (GBR).

All four drivers have previously competed in 24-hour races, with Stippler a winner of the 24 Hours of Nurburgring and the 24 Hours of Spa. Osborne and Haigh have tasted 24-hour success too, at Dubai, with Osborne winning the 2012 SP3 class (with Optimum) and Haigh a podium-finisher in SP3 last season with Speedworks. Ratcliffe claimed a GTC podium in the 2014 Gulf 12 hours in Abu Dhabi on his debut in a Porsche.

A thorough testing programme is now underway, and the team will arrive in Dubai ahead of the Middle East’s only twice-around-the-clock endurance race with a good understanding of their new weapon of choice.

Optimum Motorsports’ owner and team manager, Shaun Goff is confident of a good result in the eleventh running of the Dubai event, with a bit of luck.

“We have a strong driver line up and expectations are high. But, as ever with 24-hour races, it’s reliant on a lot of factors coming together to achieve a top result; I think we have a good chance of getting a good result. With Audi’s reliability proven in 24-hour races all over the world and the new R8 clearly a match for any other GT3 car, coupled with the team’s experience, these expectations are achievable.

“It’s our first attempt at racing in the top class here in Dubai, but our fifth successive year racing at the Dubai 24, so I feel like we can present a challenge. Frank is a driver of the top order – it’s easier to tell you what he hasn’t won. Joe gets better every year and now carries significant GT3 and endurance experience. Ryan has a year of Blancpain under his belt, and Flick is a good team player, and has the crucial ingredient in endurance racing to deliver time and time again.

“As a team, we love coming to Dubai, this year even more so. We’re very proud to be in the A6 class and we’ve assembled a talented team of mechanics and engineers who are highly motivated to get a result and raise a few eyebrows back home.”