M1 GT Racing have confirmed that they have added a three race Intercontinental GT Challenge programme to their already announced plans in the 2016 Pirelli World Challenge and Sprint-X with a brand new 2016 Audi R8 LMS. 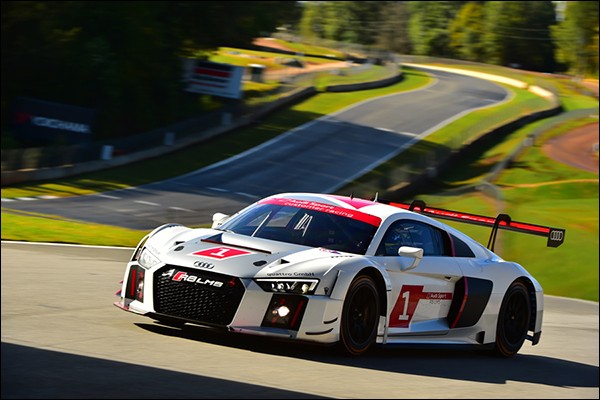 The Florida team have already taken delivery of their new Audi with testing set to get underway next month.

“The Intercontinental GT Challenge is something that we had looked at since the Spa event in June of 2015,” explained Remi Lanteigne, M1 GT Racing Technical Director, who has also taken the business development role within the organization. “We reached out to the series, gathered and evaluated information, and will contest multiple events.”

“We were really hoping to compete in all four events but the first event in Australia is just around the corner in February and the entire team agreed that if we couldn’t do it right, then we should hold off to make sure that we are 110% prepared and ready. We really like the product that SRO Motorsports has put to the racing community and believe in the series.”

Piloting the M1 GT Racing Audi R8 LMS will be the likes of Walt Bowlin, Guy Cosmo and Larry Pegram, as the trio will globetrot in their hunt for international success.

Bowlin returns to the M1 GT Racing lineup as he will see action in not only the Pirelli World Challenge GTA division, but also in the Intercontinental GT Challenge programme.

“Racing in Spa at the 24 Hour race has been a dream of mine. To me, it is the Granddaddy of Sports Car racing, similar to the Indy 500, Daytona 500 and Monaco,” explained M1 GT Racing’s Walt Bowlin. “I am really excited to race on such an international stage, not only as part of M1 GT Racing, but also with two great friends in Guy (Cosmo) and Larry (Pegram). I will be working hard on the simulator to ensure that I am primed and ready to go.”

Bowlin continued, “There is also a strong chance of expanding our schedule to several other European events in 2016 and beyond.”

Guy Cosmo will join Bowlin for the programme both in North America and beyond:

“I’m so excited to be joining Remi and all the guys at M1GT and Audi Sport customer racing for the SRO Intercontinental GT Challenge. The SRO has created a platform for some of the most exciting and hotly-contested GT racing in the world lately and I’m honored to join M1GT as the first North American team to enter,” explained Cosmo. “M1GT has evolved considerably since it’s inception and is really stepping up it’s game. With a new Audi R8 LMS, continued support from Audi Sport customer racing and the fire and motivation within this crew, we will have a great experience making our foray into international competition.”

Gaining experience in the Pirelli World Challenge Sprint-X series and through multiple planned tests with the team, Pegram has also seen competition in the open wheel racing community behind the wheel of a Pro Mazda for three seasons and in IMSA GTD competition. Testing with M1 GT Racing at the NOLA facility earlier in 2015, Pegram was able to turn fast and competitive race laps and will be a great fit behind the wheel of the M1 GT branded Audi R8 LMS.

“I have been racing motorcycles my entire life and I feel honored to be able to jump into a team like M1 GT Racing at such high profile events such as the Intercontinental GT Challenge,” explained Larry Pegram. “My motorcycle career has been great, and I am excited and welcome the opportunities and challenges of sports car competition. To face these challenges with people such as Guy (Cosmo) and Walt (Bowlin) and in a first class operation at M1 GT Racing, I feel right at home and look forward to the 2016 season.”