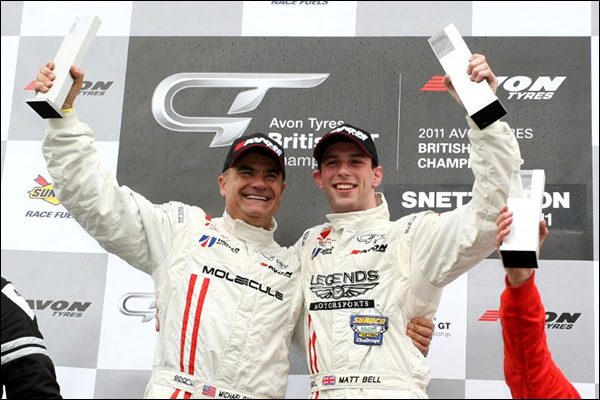 Guasch will join Alex Brundle in one of the team’s two Ligier JS P3 cars as preparations intensify for the Anglo-Amercian team’s ELMS debut that begins at Silverstone on 16 April.

The American businessman raced for the Leeds-based team in 2010 and 2011 in an Audi R8 LMS GT3 sportscar and scored the team’s first race victory at Snetterton alongside Matt Bell (the pair seen above), who will be piloting the team’s second Ligier in 2016. Mike also raced with the team in the 2010 FIA GT3 Championship, with Mark Patterson as his team mate. Mark too has been announced as part of the team’s 2016 ELMS campaign.

The team, who are looking for a second bronze graded driver to join Alex and Mike and a silver graded driver to join Mark Patterson and Matt Bell, have taken delivery of their first Ligier JS P3 sports car. The 2016 ELMS season roars in to action at Paul Ricard in France for the official two-day test on 22-23 March.

Mike Guasch, Driver, United Autosports: “I am thrilled to come back to United Autosports with Richard Dean and Zak Brown. I spent two great years racing in Europe with them in 2010 and 2011 in the Audi R8 LMS. I moved back to the States to drive prototypes and found that endurance racing in those types of cars suits my driving style very well. I am excited to drive the Ligier JS P3 car because it is the new, modern version of the LMPC car that I have been driving for the last few years. I can’t wait to get back to racing in Europe, working with my old team, friends, team mates and Alex Brundle, my new co-driver. I’ll be pushing hard to win the ELMS title for United.”

Zak Brown, Team Owner and Chairman, United Autosports: “It’s great to welcome Mike back into the team. We are looking forward to working with him again and hopefully, along with Alex and their third team mate, they will be able to get some good results in the ELMS.”

Richard Dean, Team Owner and Managing Director, United Autosports: “It’s great to have Mike back with the team. He won our first GT3 race with Matt [Bell] in 2011 and he’s gone on to do great things over in America. We are hoping he can return to the United family and continue his run of success with us.”