Beyond that though there was an unrivalled selection of new and very heavily revised GTE spec machinery on display in a Roar test interspersed with sprinkles of rain and misty conditions. Saturday’s proceedings were delayed for more than 90 minutes after heavy fog rolled in.

Despite that, and counting out the night session on Saturday which saw a fastest time 4 tenths off the fastest of the class across the test, the fastest times for the remaining six sessions were separated by less than 2 tenths of a second across five different cars: both BMWs, both Corvettes and the Scuderia Corsa Ferrari 488. 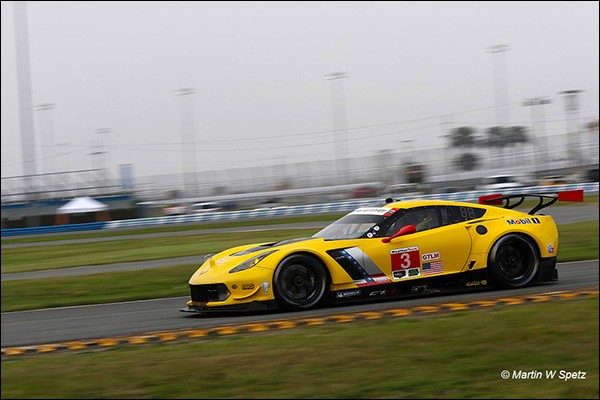 Both Corvettes topped a session, the #3 topped a pair, sessions three and seven, Antonio Garcia setting the fastest time of the final session for the #3 (1:45.227) in the dying minutes as the rain came.

The #3 completed a Corvette 1/2 on Sunday morning too (and in a faster time than the later session topping effort, a 1:45.124) both Millennium Yellow machines showed they were still very much in the game. 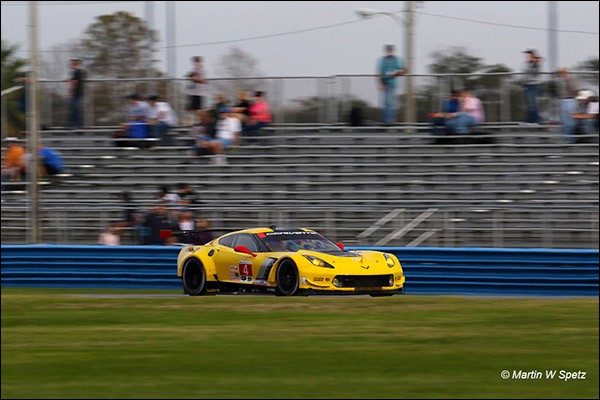 The #4 crew though had to recover from a fire on the first day of the test, Tommy Milner stopping on track with a conflagration at the rear of the #4 after a failed check valve in the refueling overflow system caused the blaze.

The #25 BMW (complete with white ‘taxicab’ door) finished top of the class times times in the second and fifth sessions, a 1:45.120 a tenth and a half off the best of the test in class, that the sister #100 M6.

There was one blemish on the #66 Ford GT’s Roar before the Rolex 24 Hours, this a crash for Dirk Muller at Turn 5 on Sunday morning – there was minor frontal damage to the Ford, Muller taken to the infield care centre for evaluation. 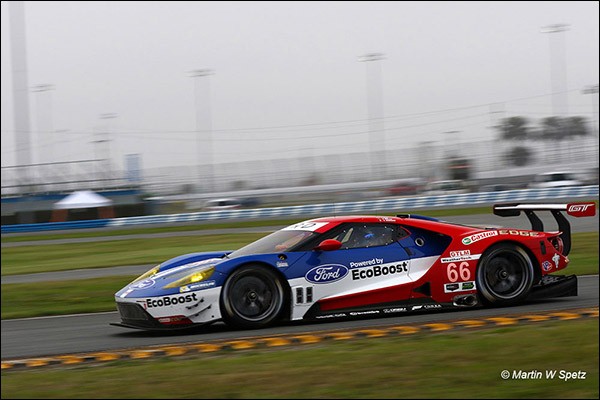 Best time of the test for the #66 was a 1:45.248 and the car was in the top five in every session, including the rain shortened final session on Sunday after the car was repaired.

It was a late start to the test for the #67 Ford after the Ganassi Transporter’s tail lift failed, the car failing to appear in Friday’s first track session as a result.  Thereafter though the #67 proved, on balance, but not overall, to be the pacier of the pair, the car finished second fastest in four of the six sessions in which it ran with a best time of 1:45.269 in session 4. 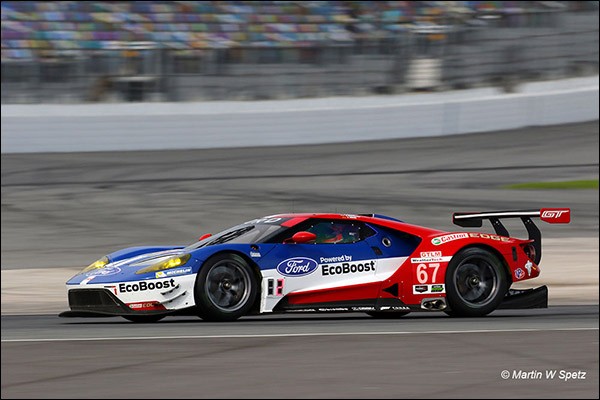 NAEC (and Le Mans) only for the first of Scuderia Corsa’s new Prancing Horses with Memo Rojas added to the initially named trio. 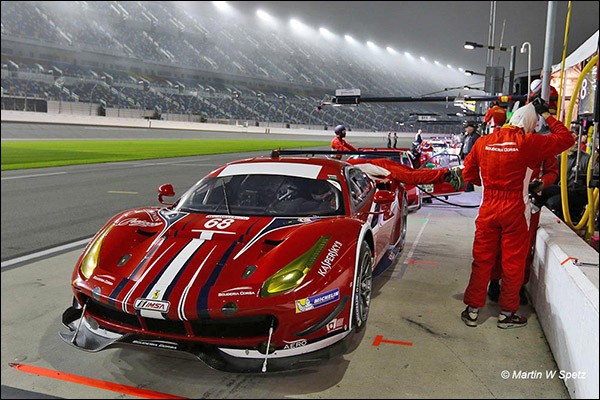 It was very early days for the turbo engined 488 but that didn’t stop Pier Guidi posting the fastest time of the rather misty night session, 1:45.266.

A 45.314 was the best time of the test for the AF Corse run, SMP Racing entered Ferrari 488, the team opting to miss the final session of the test. The Ferrari has latent potential aplenty, it will only get better! 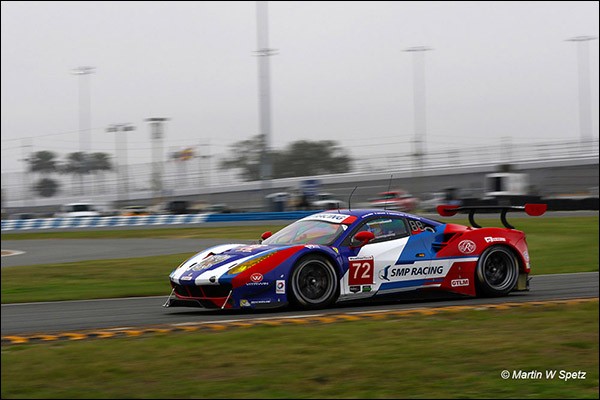 The BMW Team RLL outfit started out with a bang, the #100 M6 GTLM setting the overall fastest time of the test in this hotly contested class in the very first session, a 1:45.088 the only lap under 1:45.1 in GTLM. 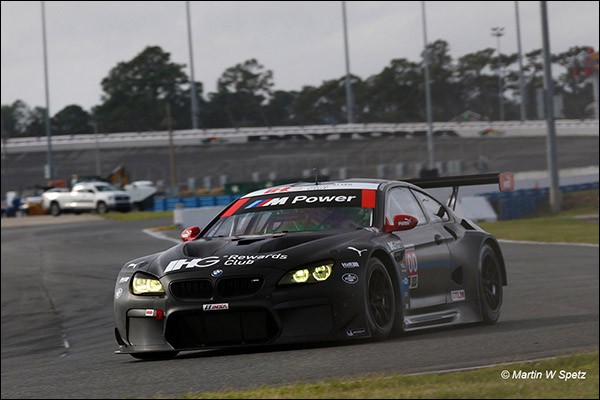 A 1:45.524 on Sunday morning was the fastest time for the #911, a slightly slower time in the final session seeing the car, in the hands of Patrick Pilet in a best for Porsche of the test 3rd in class at the checkered flag. 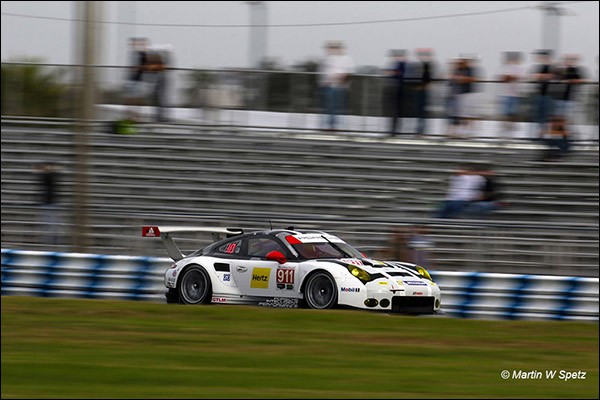 Neither Porsche was at the pointy end of the timing screens almost throughout the test with the 912 ahead of the #911 for the first four sessions, the order reversed thereafter, but with both cars seemingly mired in the middle to lower order. 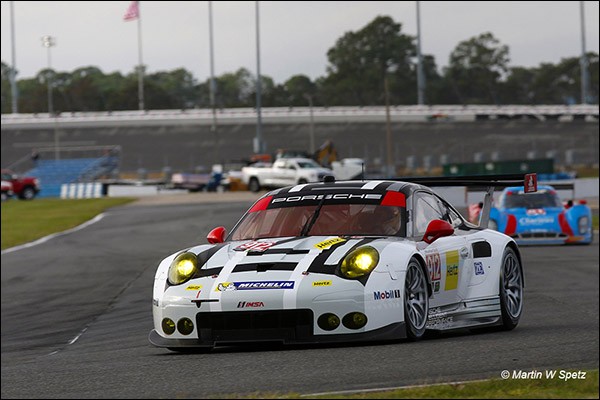