As the sixth hour of the 2016 Dubai 24 Hours opened, the less high-profile drivers were aboard the leading #28 and #4 Audis, Carsten Tilke in the Land Motorsport Audi and Andreas Wieshaupt in the C. Abt Racing R8, running about nine seconds apart. Bleekemolen was third in the #2 Black Falcon Mercedes (below), 53 seconds off the lead. 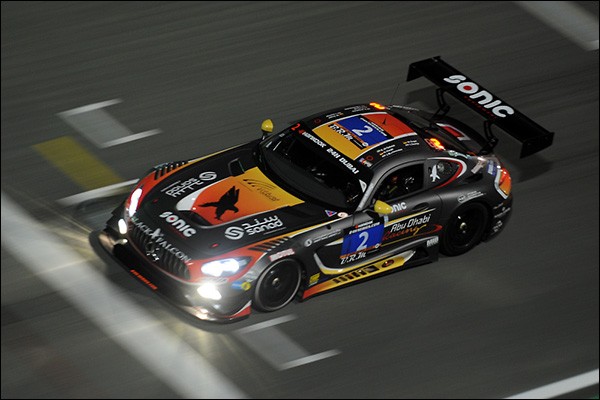 The Dutchman had moved into second by lap 118, due to an unscheduled stop for Wieshaupt’s Audi, but himself pitted shortly afterwards. The car was briefly pulled back into the pit garage, while the #999 Attempto Porsche also pitted around now having had an off, the two cars having come together at turn one while Bleekemolen was passing down the inside. 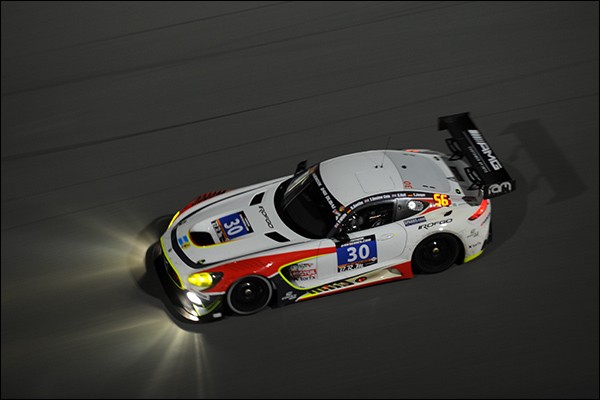 With the Mercedes and #4 Audi out of the picture, Matteo Cressoni aboard the Scuderia Praha Ferrari inherited second and the chase for the lead, with Alain Ferte piloting the recovering WRT Audi in third. Ram Racing (above) was in fourth, with car owner Paul White behind the wheel of the new AMG GT, but he was being caught by Christodoulou in the #16 Black Falcon Mercedes, the spare car that had started from the back of the pack.

Christodoulou took fourth on lap 126, but White continued to drive well, clocking a 2:03 shorty afterwards. Also in the top 10, the Optimum Audi came into the pits with damage to its rear trailing arm following some left-rear contact. Meanwhile Christodoulou had made up another place and was now third ahead of Ferte’s WRT Audi, while White handed the Ram Mercedes back over to Onslow-Cole.

Hour seven began with a pitstop for the leading #28 Land Audi, Carsten Tilke getting out and Basseng stepping in. Some seatbelt issues delayed the car’s departure slightly, just enough to drop it to second place once the order sorted itself out after the stops. That left Basseng chasing down Kox, who was back aboard the Praha Ferrari, for the lead.

He would have to deal with Laurens Vanthoor, however, the Belgian back aboard the WRT Audi after a stint by Alain Ferte. Onslow-Cole was fifth having overtaken Webb in the #16 Mercedes, which was also passed by Rolf Ineichen in the Konrad Motorsport Lamborghini, which was beginning to make its presence felt after a quiet couple of hours.

Rejoining the race with 20 minutes of the hour remaining was the #72 HRT Porsche Cup car, good news for the team in view of the fact its sister entry had retired earlier. Around the same time, the #2 Mercedes AMG-GT was also confirmed as a retirement, due to damage sustained during Bleekemolen’s earlier contact with the Attempto Porsche. Elsewhere, Chris James, driver of the #151 Sorg Rennsport, was confirmed by his co-driver George Richardson to have suffered a broken ankle in the car’s race-ending incident. 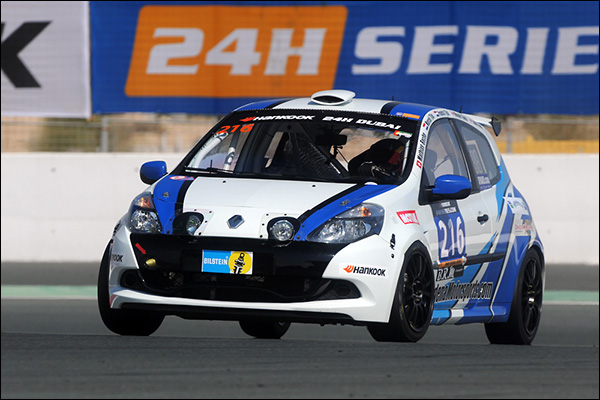 In the touring-car categories, WEC racer Mathias Beche had helped Modena Motorsports’ Clio (above) to the head of A2, while A3 was being led by the appropriately numbered #208 Altran Peugeot. The Memac Ogilvy SEAT squad meanwhile led the now four-strong TCR class, while in SP2, French Porsche squad Lorient Racing now held sway. QSR continued to head the BMW Cup category, having done so since the initial top two runners were eliminated.