The troubled run for the #17 IDEC Mercedes continued at the top of hour 10, as it circulated slowly, appearing to run too low at the front. The car was already down in 75th position due to its earlier woes. Elsewhere, the class leaders remained largely unchanged, although Optimum Motorsport’s Ginetta had taken over at the head of the SP3 class as the similar Nova Race car dropped to third, three laps adrift. 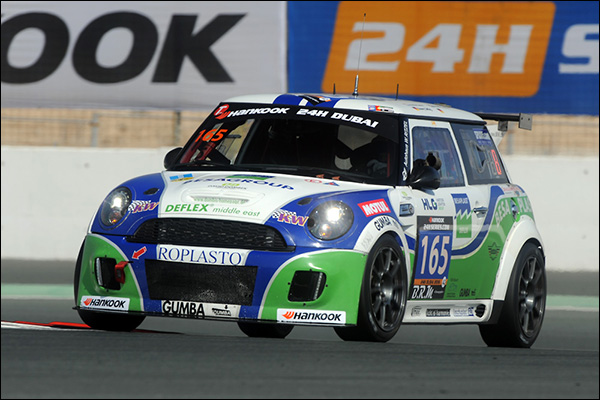 The Besaplast MINI (above) was back in front in class A2 now that Mathias Beche was out of the Modena Motorsports Renault Clio. The Altran Peugeots continued their serene 1-2 domination of A3, while the BMW Cup and SP2 were also ‘as you were’, with respectively the QSR and Lorient Porsche entries in front. In the top category, second-place man Mies in the #28 Audi (above) had the gap to the leading Ferrari down to just over 45 seconds, with Vanthoor in third, 26 seconds behind. Abdulaziz Al-Faisal was doing a solid job of holding fourth in the #16 Black Falcon Mercedes, but Lamborghini factory driver Fabio Babini was just 35 seconds further down the road in the Konrad Motorsport Huracan.

Manuel Metzger brought the erstwhile class-leading #61 Black Falcon Porsche 911 Cup car (above) into the pits complaining of ill handling caused by an impact before he got into the car. The #40 Lechner car took over the class lead just as a Code 60 was called for a two-car crash. The incident involved Cressoni in the leading Scuderia Praha Ferrari (above) and the #51 Primus Racing Ginetta and brought out the first Code 60 for getting on two hours. The two Audis in the top three both took the opportunity to pit, as did the fourth-place Black Falcon Mercedes (above) as the tenth hour reached its conclusion.

Most of hour 11 passed under Code 60 as the crash that took out the leading Ferrari was cleared up. According to Peter Kox, Cressoni’s co-driver in the car, the Italian was okay, but Thomas Martinsson in the Ginetta was said by his team to have suffered several broken bones and was being treated in hospital.

With the #28 Land Motorsport and #19 WRT Audis up to first and second with the demise of the Praha car, the Konrad Lamborghini was now in an overall podium position, with former race winner Rolf Ineichen on board as the clock approached 13 hours remaining.