Our North American Editor Gary Horrocks reports on something rather different for DSC – The famously rule flexing 1967 Chevrolet Chevelle NASCAR of Smokey Yunick:

One of the benefits of volunteering at a Motorsport Museum is the opportunity to reacquaint myself with other areas of motorsport that I’ve neglected over the last years 15 plus years of focusing on sportscars. Those that know me much at all know I’m not the biggest fan of the current iteration of NASCAR, but I have to admit I was quite excited when I was asked to prepare some signage for a legendary, I guess non-race car. Right next to this Chevelle was a Ned Jarrett 1966 Ford Fairlane (below), which is actually quite tame (and much more stock) when compared to the subject of this article. 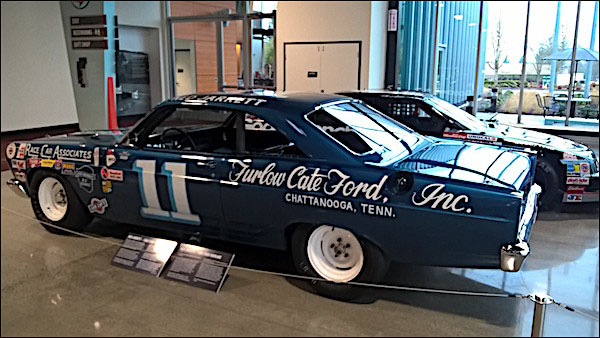 Even in the ‘60’s, the term stock car was pretty much a bold faced lie…

Most race cars are famous for what they did on track. Not this Smokey Yunick built 1967 Chevrolet Chevelle – it was banned by NASCAR before it had a chance to compete. Because of the many stories surrounding the car and its creator, the car became an urban legend, where the lines between fact and fiction are extremely blurred. Much of this is due to technical genius and outright character that Smokey was. 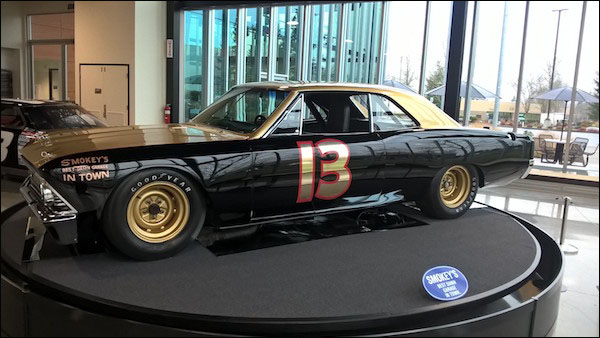 He was a one of a kind character. A survivor of over 50 bombing missions in WWII, he chose Daytona Beach to settle in after the war. It was here that he opened his garage, The Best Damn Garage In Town and immediately became a part of the racing scene, first on the beach and then on the tracks of a then infant NASCAR racing series. 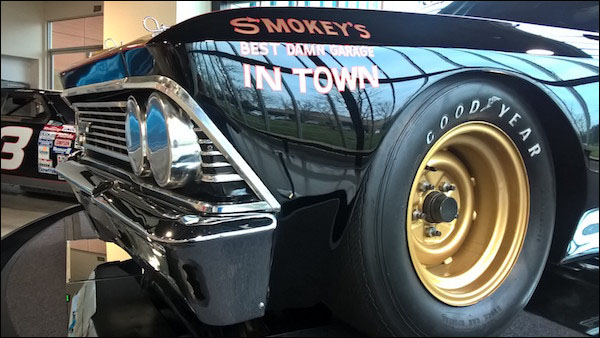 While he saw tremendous success in NASCAR, winning championships in 1951 and 1953, he also participated in Indycar racing, winning the 1960 edition of the Indy 500 with a car driven by Jim Rathman (who came out on the short end in a chapter of “Best Damn Garage in Town” titled 50 Good Drivers and an Asshole). His NASCAR career started with racing Hudson Hornets on the beach, but eventually he hooked up with Chevrolet where he put his mechanical genius to work for many years.

It is from his efforts for Chevrolet that this rather unique Chevelle was born, which was supposed to race at the Daytona 500 in 1968. Legend is that this car is a 7/8 scale replica of a Chevelle, but that is false. The car matched the templates of a nearby Chevelle, one that also happened to be owned by Smokey…

Much of what makes this car so unique is the details. The front bumper was altered and set back into the bodywork to improve the aerodynamics as well as deepened 2 inches in order to keep the air out from under the car. 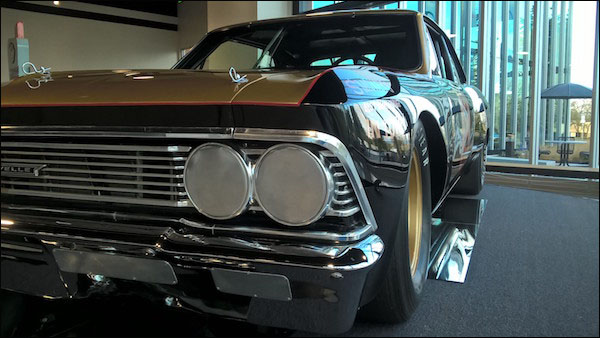 Additional attention was paid to the windshield and making it flush with the surrounding bodywork to reduce the drag. The top of the car features a subtle flip up near the rear edge to generate some downforce at the rear of the car. 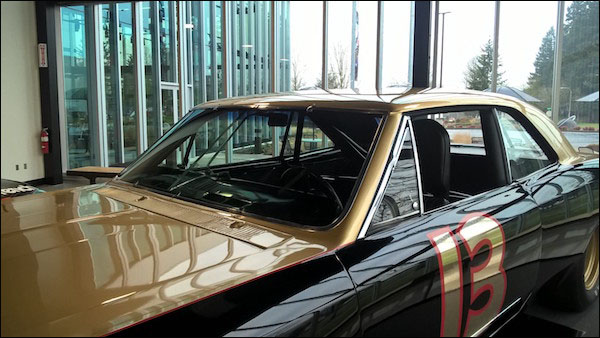 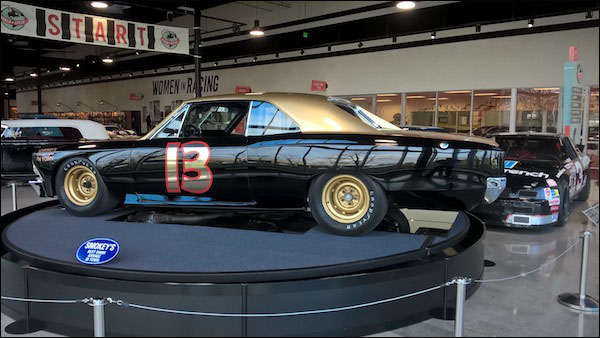 Smokey never considered himself a cheat, but he was always looking for a way to artfully dodge rules. ”If they didn’t say you couldn’t, I thought it was fair game” is how Smokey approached racing. A prime example of that is in the frame of this car. The NASCAR rulebook stipulated that the frame could be substituted from another manufacturer, so Smokey manufactured his own frame and utilized the 427 cubic inch Chevrolet motor as a frame cross member in order to further stiffen the chassis. 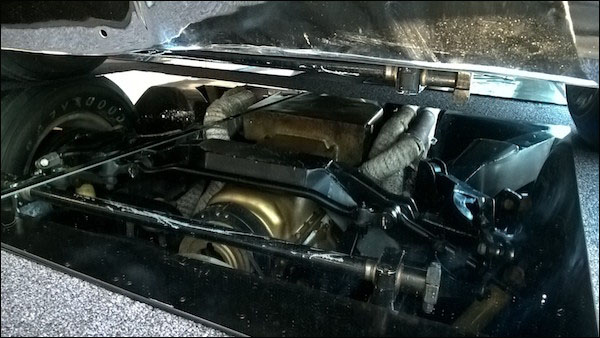 NASCAR rules stated that the engine must be centered between the frame rails, so in order to gain an advantage it was offset to the left. He also moved the driver back and to the left of the car, again playing with the balance. The use of Lexan for the front and rear glass helped the car come in 100 lbs below minimum weight, so Smokey added the necessary weight to the left side of the car. 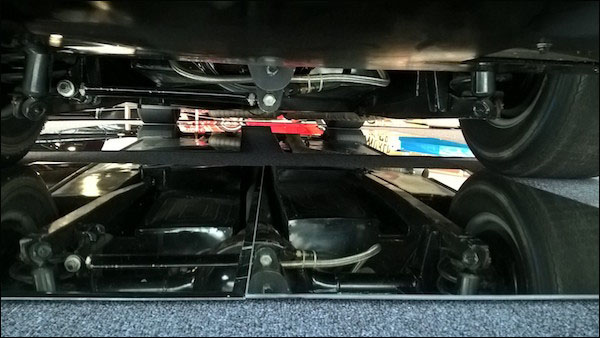 But that wasn’t enough – the body was actually moved back a couple of inches, which also meant that the wheel wells were moved accordingly. The underside of the car was smoothed as much as possible, much like a bellypan, while negative air pressure pockets were created behind the wheel wells, all in an attempt to move the air out of the wheel wells as efficiently as possible and increase the downforce. 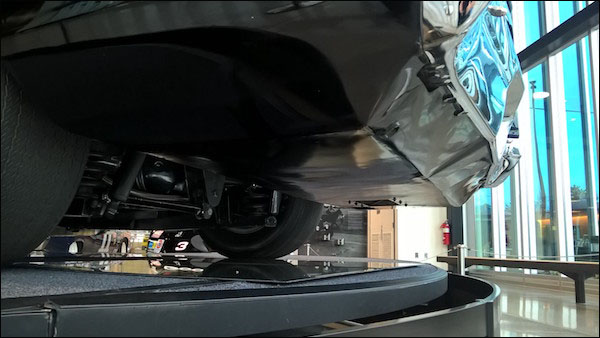 The frame is responsible for much of the legend of this car. Besides all of the above, the frame rails were in reportedly designed to be an auxiliary fuel tank, secretly increasing the regulated capacity of the car by something like 5 gallons, which in theory would allow it to make less stops during a race. Tech was performed on the car with an empty fuel tank and when Smokey was informed that the car failed and would not be allowed to race, he started the car up and drove away, never to return to NASCAR, although he did try to take out his frustrations on Bill France with a 4 pound hammer, but that was also from many years of accumulated frustrations… 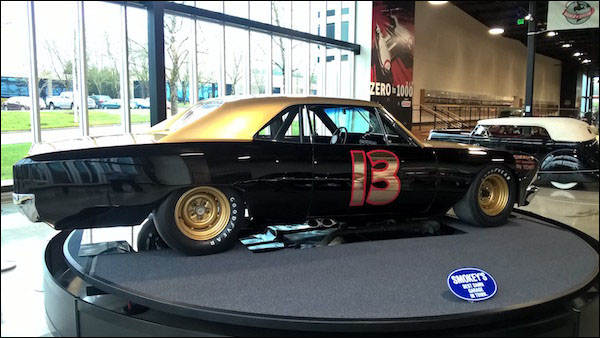 Long afterwards, in his book, “The Best Damn Garage in Town” Smokey looked back and said, “this car had power, aerodynamics and chassis. Too bad we never got to run it. I think it might have been interesting. Was this car a cheater? You’re goddamn right it was… but not by NASCAR’s published rule book in 1968.”