Free Practice 2 got underway with cars on full wet tyres once again. Sprinkles were the order of the day under dark skies as the radar and the horizon suggested heavier rains were on the way. Temperatures were chilly which also prevents quick drying of the track surface.

The session was only scheduled for 30 minutes which was just long enough to get some modest running for most of the field. 35 cars set times within the first few minutes, but the full field was reluctant to venture into the unknown. The Porsche GTLM team, for example, chose not to go out at all.

The GTLM class quickly claimed the top 11 spots with only the prototypes of the BR01 Nissan and the VisitFlorida Prototype in the midst. Just shy of ten minutes saw the field stopped by a red flag. 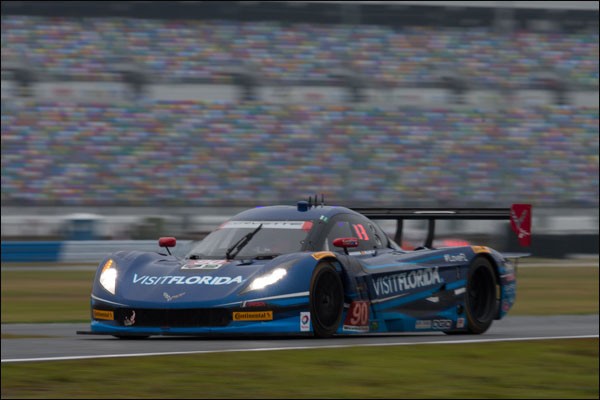 The #8 Starworks entry and the #50 Highway to Help car stopped at the bus stop. The #8 got a push and returned to the pits with no damage and the team saying that the car merely stopped and lost the fire, but had no other contact or spin. The #50 also found its way back to the pits with no further help necessary.
When the green flag waved to resume festivities, it didn’t last long.

Another red flag resulted from a comprehensive tyre explosion suffered by the #007 Aston Martin on the front stretch in the hands of Lars Vijoen. He didn’t spin and returned to the pits slowly with damage to the rear bodywork and rear wing. The Turner #97 similarly suffered a right rear tire failure at almost the same time and was able to get back to the pits, replace the tire and continue with no other visible damage. Tire debris modestly damaged the right front radiator grille of the #45 Flying Lizard/Krohn Audi and it was able to return to the pits for attention. 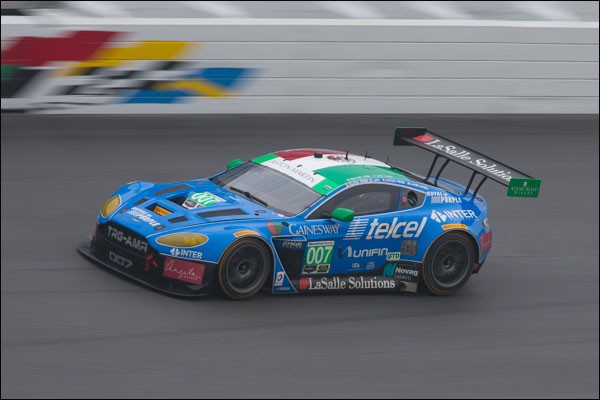 Chilly and wet conditions makes one wonder whether all cars were able to get sufficient tyre temperature before putting sustained loads through the right rears on the banking. (Credit for the observation to the IMSA radio team and driver Mike Hedlund listening in from home.) Surely the teams will be taking a close look at their temperatures and pressures before qualifying. Of course, there could also have been debris somewhere that caused problems.

Aston Martin driver Lars Vijoen commented after the session “I had a tire blowout on the right rear in practice going into turn one. Luckily, I was just before the brake zone, so I came off the power just before. It was a massive explosion. A sudden entire delamination. It was unexpected. It has done a bit of damage to the right rear. Hopefully we can get the car back for qualifying. It was a bit scary. A big loud noise.” Team boss Kevin Buckler confirmed that the car would be fixed for running later in the day and saying that the blowout was a big hit that “tore up the car pretty good.”

The practice session hardly provided much useful running for the field. Few cars did more than four laps with only one or two getting 5 laps in. Most of the field only managed two or three laps between the red flags. With running time limited, teams would have been grateful for running at the Roar test. Without that, teams would have had no dry running before qualifying at all.
The green waved with only two minutes remaining and most of the cars went out to complete another lap or two. Usually, going out for such a short stint wouldn’t be worthwhile, but that is likely a mark of the value of such limited track time.

Time sheets for the sessions are largely irrelevant given the truncated session, but Ganassi Racing claimed the top spot for the Ford GT in the hands of Sebastian Bourdais. The BR01 Nissan was the fastest prototype in sixth place overall and the #20 BAR1 prototype challenge again leading its class. 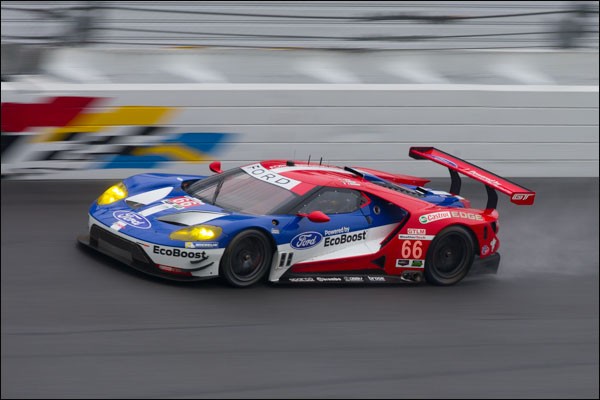 The #97 Turner BMW set fast time in GTD before its issues ahead of Marc Basseng in the #28 Konrad Lamborghini to set that car’s first laps of the event. Nine cars set no times at all and a handful only did a lap or two. 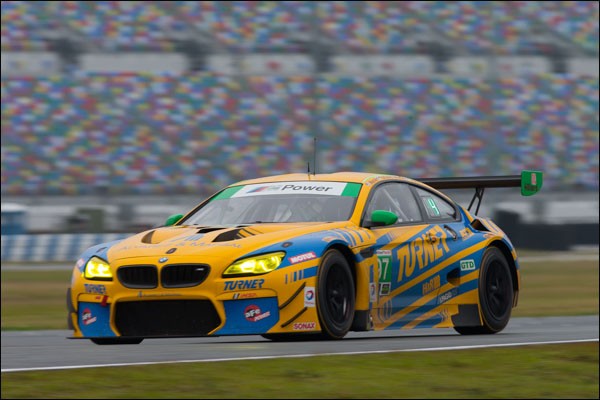 Qualifying gets underway at 4:00pm local time, slightly two hours from the end of the practice session. It could be a wet session which will raise interesting strategy questions for how hard to go for pole and which drivers to send out to set the times.