At the front, Pipo Derani in the #2 ESM car led the race at the half-way point ahead of the two Action Express cars. The second Mazda prototype showed strong pace and made it back to the lead lap only to retire with engine issues in the valve train. Prototype challenge solidified as a three car battle with the rest of the field falling away. The most dramatic moment of the two hour period occurred when the dominant GTD Lamborghini leaders came together going into turn one, inflicting significant suspension damage to both cars and requiring long visits to the garage. Their exit opened up the GTD field and more than a dozen run on the same lap with the lead changing with each pit stop sequence.

The #55 Mazda prototype, having made its way back on the lead lap, lost its lap again when Tristan Nunez pulled to off the left coming out of the east horseshoe. After a reset, he made his way back to pit lane and resumed after the crew added oil. He escaped calamity by mere inches when the GTD leaders got together, sliding across the grass and pit lane exit just missing the rear wing of the Mazda. 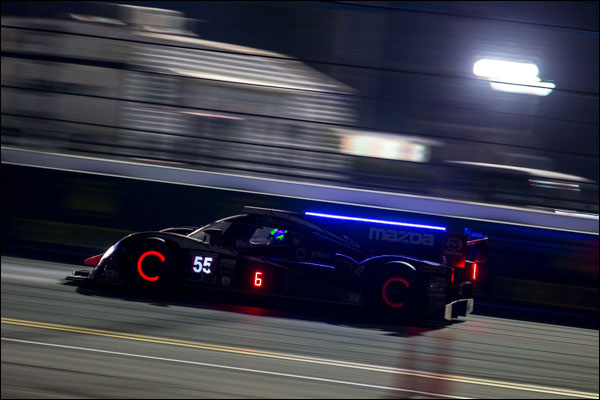 The two Lamborghinis leading GTD class somehow both made contact on the front straight heading into turn one. Both spun across the grass and hit the inside wall. Justin Marks in the #16 Change Racing Lamborghini was able to run at slower speed back to the pits for repairs to the right rear. Bryce Miller in the #48 came to a stop in the turn one apron with a visibly battered suspension which got a flatbed ride back to the garage. 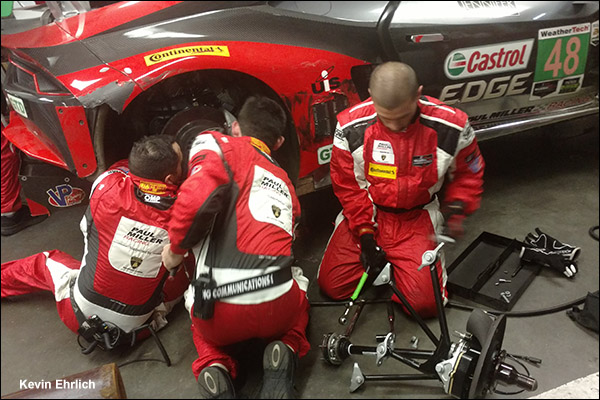 Suspension damage was the common theme with the #16 Change Racing crew focusing on the left front and rear (same side that they replaced once already from the practice crash). The #48 Paul Miller Lamborghini required attention on all four corners of the car. Both crews were working briskly in an attempt to get their cars back in action. 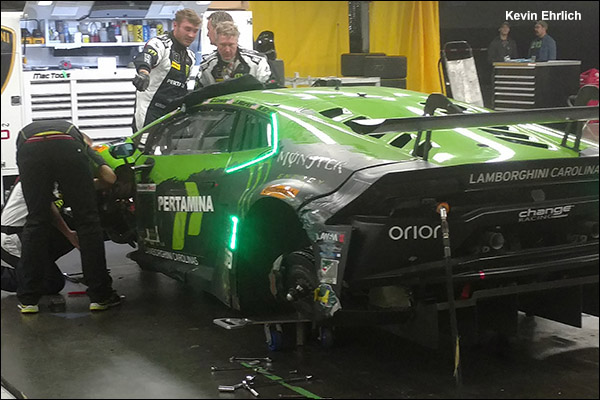 The eleven hour mark saw Sven Muller rise to take the Frikadelli Porsche to the GTD lead. The Porsche factory junior ace spent the night turning fast and consistent laps. With the incident between the two GTD Lamborghinis, Porsches made up three of the top four spots in class.

For those interested in such things, the lead prototypes circulated in the 1:41 range. The GTLM class made its way up to eighth overall and lapping about 4 seconds a lap off of the prototype pace with slim margins among cars. The highest place prototype challenge car ran at 18th at a similar pace. The highest place GTD was shown in 21st in the 1:52 range, but with a bit more variability for lap times between cars.

The thirteenth full course caution waved for the #55 Mazda prototype. Ominous smoke emanated from the rear of the car as the driver, Tristan Nunez quickly jumped out. A flatbed delivered the Mazda back to its garage spot and the car retired due to valve train issues and began its descent down the order.

After only 19 minutes of running, the fourteenth yellow paused proceedings to allow recovery of the #50 Highway to Help Daytona prototype car which stopped on course and required a tow back to the paddock. It appeared to have some electrical challenges. In the broader category of electronics, the #90 VisitFlorida car has been struggling with traction control issues. They kept close and stayed on the lead lap but didn’t feel very comfortable with the car.

The #48 Paul Miller Lamborghini re-emerged during the caution after having done substantial suspension surgery to their battered Huracan in the garage. Bryan Sellers got into the car to take it back into the race as the green flag waved again just before the 12 hour mark. 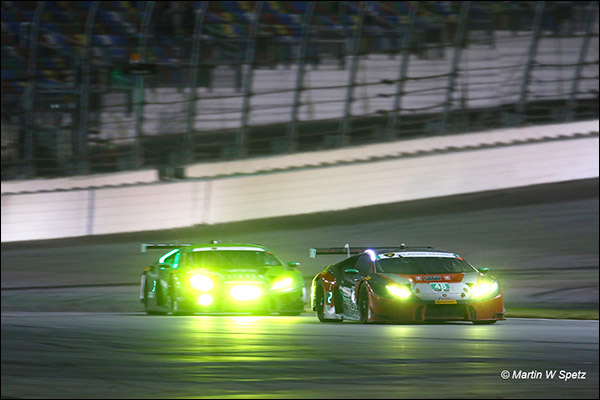 Pipo Derani led at the halfway mark in the #2 ESM with a slim lead over Scott Pruett in the #5 Action Express Corvette DP. Pruett held his own slim margin over Action Express teammate Simon Pagenaud in the #31. Six prototype cars ran on the lead lap. 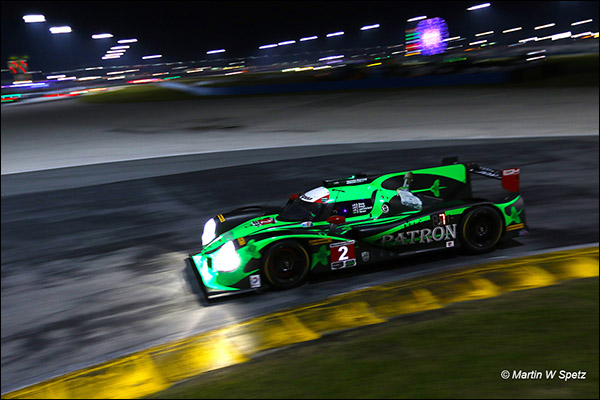 In GTLM, Alessandro Pier Guidi led in the #68 Scuderia Corsa Ferrari which was noteworthy as none of the new Ferrari 488 models had spent much time at the front of GTLM at any time in the race. The lead was an artifact of the pit stop sequence and he would shortly surrender the lead to Porsche teammates Nick Tandy and Fred Makowiecki who continued to circulate in tandem. Nine GTLM cars ran on the lead lap at the halfway mark with the leader also in seventh place overall. 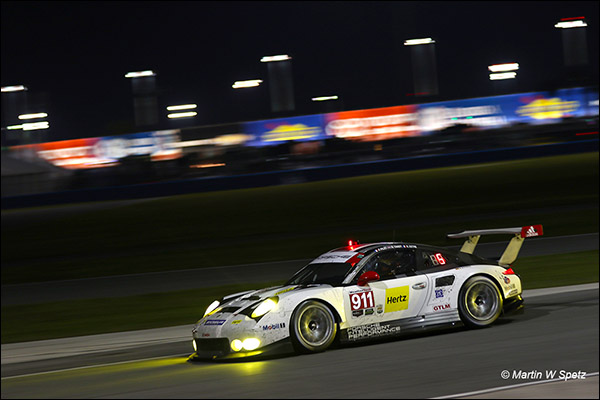 Prototype challenge tightened up a bit as a battle formed between the trio of the #85 JDC-Miller Motorsports car, the #52 PR1/Mathiasen Motorsports car and the #20 BAR1 Motorsports. Stephen Simpson in the #52 made a material effort alongside young Kenton Koch to reclaim the lead. The trio are all on the same lap but no other prototype challenge cars are anywhere close in the order. 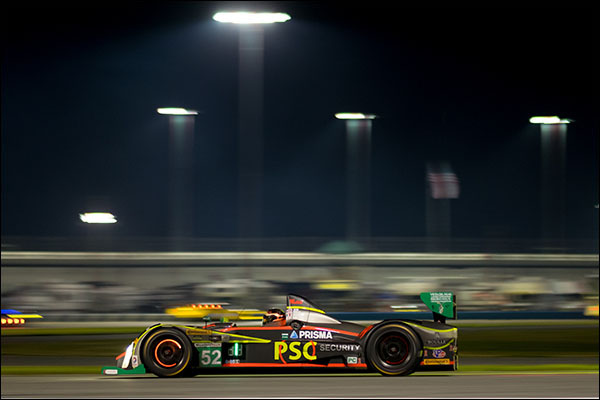 The GTD lead seemed to rotate with every pit stop, but the #23 Team Seattle/Alex Job Racing car led with Alex Riberas at the helm in front of Paul Dalla Lana in the #98 Aston Martin. More than a dozen cars ran on the same lead lap in class, so the GTD class remained wide open. With the dominant Lamborghinis having excused themselves, chances for class honors open up a bit further.