It was a Cadillac 1,2 for the second CoTA race as Johnny O’Connell and Michael Cooper swept through the full 50 minutes with little drama as all around them faltered! 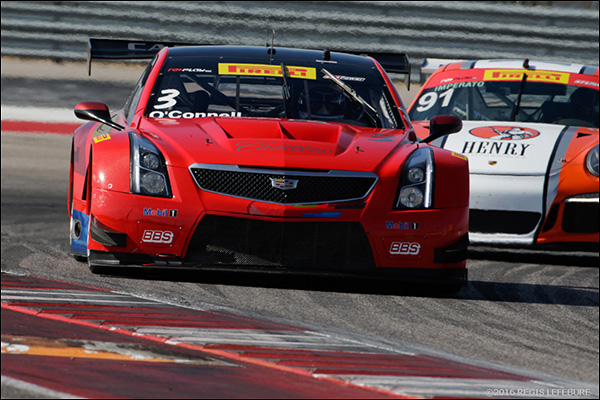 From the off it was pole man Heitkotter in the #05 Nissan with a great launch as James Davison looked for a way by front row man Pat Long, but it went wrong, very wrong after the Porsche man moved right to defend, the Nissan man cut left but contacted the left rear of the Porsche.

The contact was hard enough to punt the Porsche into a half spin to the outside and a heavy impact front end of Porsche vs armco that put the Saturday race winner out on the spot before he’d even reached Turn 1.

As the field sorted itself out Alvaro Parente in the #9 McLaren 650S GT3 cut the first element of the Esses entirely, he leapfrogged Michael Cooper in the Cadillac the KPax Mclaren man handing the place back under Full Course Yellow as the clean-up of the stricken Porsche intervened.

The race went back to green after 10 mins under FCY, Davison taking the lead through T1 but immediately receiving a black flag for the contact on Long, a stop and 10 second hold.

It was a challenging day too for the RealTime Acura squad – Ryan Eversley had a spin on the formation lap on cold tyres that saw him start the race dead last whilst at the restart, Peter Cunningham in the second TLX got a flier before being tagged by Adderly Fong in T1, turning the Honda man around before rejoining at the tail of the field. Michael Lewis too it seems had a quick rotation in the second Effort Porsche, pictorial evidence suggesting post race that he may have had some help!

Davison stayed out for another lap but then pitted on Lap 7 for the penalty to be applied, Heitkotter led again.

Also penalised at this point were Adderly Fong pinged for the contact with Cunningham – and Austin Cindric for being out of position at the restart.

The order seemed settled for a while, but O’Connell looked ominous in Second, ahead of Cooper in the second Caddy then Parente and Absolute Bentley man Andrew Palmer.

Amongst the men on the move by now was Jon Fogarty in the Gainsco/ Bob Stallings McLaren, into the top 10 and up to 8th with 20 minutes remaining.

18 minutes left and O’Connell made his move with Heitkotter seeming to struggle for traction.

The pass left the Nissan man fending off Cooper in the second Cadillac with the McLaren and Bentley looking ready to pounce too! 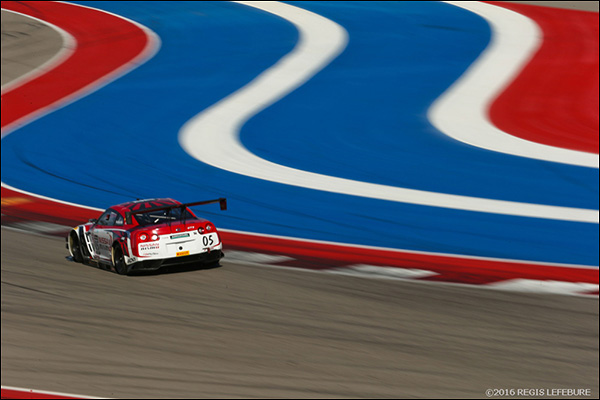 It was that move that came first, the McLaren man’s elbows in full use as the #9 made it by the black Caddy, Palmer took full advantage too, up to 3rd and fourth.

Within a lap though it was second and third as Heitkotter slewed off track, he’d lost a rear Pirelli and struggled back to the pit lane for a change, his race ruined.

But it was all too soon bad news too for both Parente and Palmer, both flagged pitwards for not allowing enough racing room in the pass on Cooper.

All of that left us with an effectively unchallenged Cadillac 1,2 with a charging, but not a little surprised, Jon Fogarty coming home to complete the overall podium, a fine result for the team with their first race weekend with their new #99 McLaren. 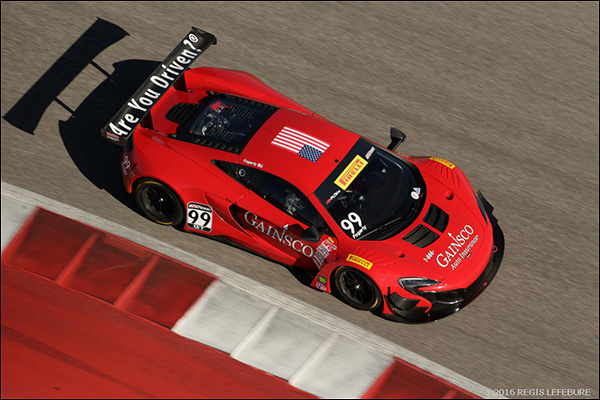 The podium came courtesy of a controlled run from Fogarty through the bulk of the race with a fighting finish that saw off the challenge of Kyle Marcelli’s #2 CRP Racing Audi.

The Audi man lost a further place in the final moments of the race to a second McLaren as Colin Thompson made it through to fourth in the #13 K-PAX 650S GT3McLaren. 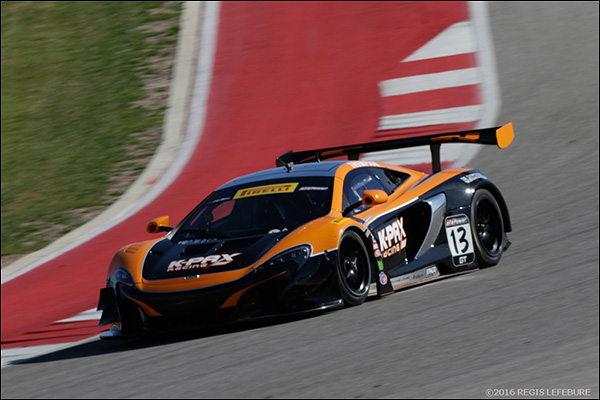 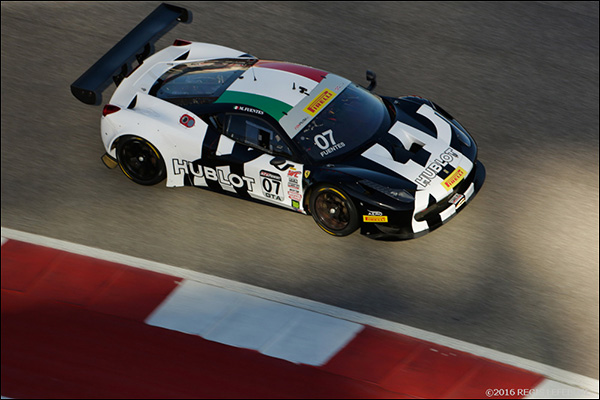 In GT Cup Sloan Urry topped the podium in the #20 TruSpeed Porsche 911 GT3 Cup car ahead of Saturday class victor Alec Udell and Will Hardeman.