It was a somewhat bijou, but nonetheless impressive array of prototypes that graced the paddock for the opening rounds of the new Britcar Prototype Series, supporting the Creventic Silverstone 24hrs event. 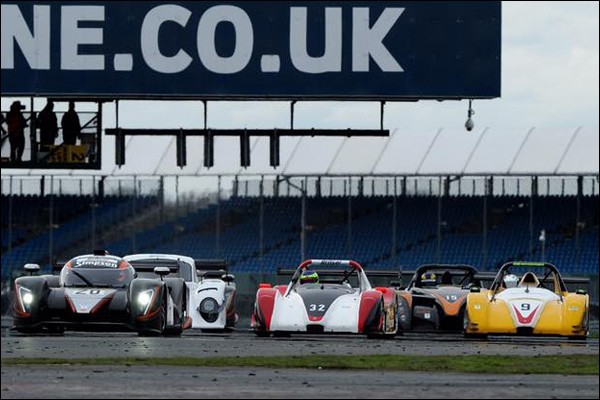 Lawrence Tomlinson made a frenetic last-gasp attack, new tyres and all, and bagged pole in the 30-minute qualifying session, posting 1:57.449 in the Simpson Motorsport-run Ginetta G57, just over half a second ahead of the surprisingly quick RH Motorsport Radical SR3 which had sat-out free practice.

Alex Kapadia set the time, which had stood for the best part of the session. Craig Dolby, piloting Nigel Mustill’s Riley Daytona Prototype, just couldn’t break the two minute barrier, and headed the second row of the grid, in front of the Algarve Pro Racing Ginetta G57 of Olympic Legend and Le Mans aspirant Sir Chris Hoy and Michael Munemann.

Paul White was fifth in the second Simpson G57, with Mike Smith’s straight-out-of-the-box Radical RXC Spyder (shared with James Hanson) and Osman Yusuf in the RAW Motorsport Radical SR3 completing the runners. Colin White missed qualifying due to commitments at Brands Hatch (he will be commuting this weekend) and will start from the back of the grid in the Team LNT Ginetta G57.

It was a surprise win for Lawrence Tomlinson in the inaugural Britcar Prototype Series race at Silverstone. For him, anyway, but not for anybody else taking even a mild interest in the race. 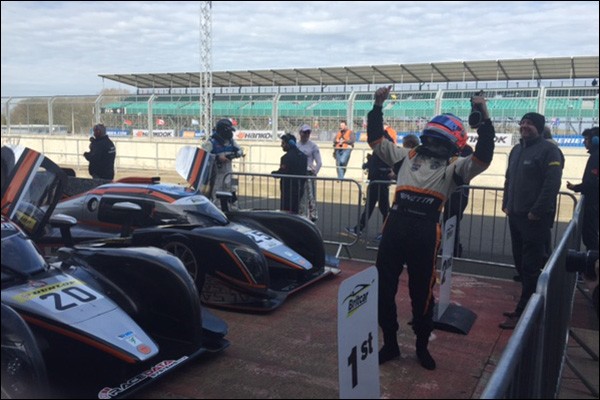 His Ginetta G57 had trailed Alex Kadapia’s Radical SR8 by over a quarter of a minute before the mandatory pit stops, but what he didn’t know was that once Paul Spencer took over the Radical, a second pit stop to tighten seatbelts dropped them out of contention.

“I didn’t know where I was, I had no radio, I thought the Radical was still in the lead, and didn’t realise the race had finished until I saw a chequered flag being waved at Copse” said Tomlinson.

Craig Dolby in the Riley DP had held third for much of the race, and once the pit stops were out of the way, found himself fending off a late charge from Paul White’s Ginetta G57, White getting the better by just 0.803 at the flag.

Osman Yusuf took Class 2 honours in the RAW Motorsport Radical SR8, but Mike Smith’s brand new Radical RXC Spyder slipped down the order late in the race after an impressive opening stint by former ETCC star James Hanson. Sir Chris Hoy started the race a lap down after a rapid gearbox change in the Algarve Pro Racing Ginetta G57, whilst Colin White had the least gruelling drive of his afternoon in his Ginetta G57, starting the race 20 minutes in after a nightmare four-hour Journey from Brands Hatch.

This had been an impressive UK debut for the G57, though quality drives from Kapadia and Dolby showed that the fight can be taken to them.

Lawrence Tomlinson made it a win double at Silverstone, consolidating his supremacy in Race 2 of the Britcar Prototype Series in the Simpson Motorsport-run Ginetta G57. This was no easy victory, though.

After a somewhat shabby rolling start, with Ozzy Yusuf chomping at the bit to get things moving, it was Craig Dolby that led initially, in the Riley DP, with Tomlinson and a fast-starting Alex Kapadia (Radical SR8) in tow, but by lap three both got the jump on the Riley, and began to eke out an advantage. An early retirement was posted by James Hanson, taking the first stint in Mike Smith’s one day-old Radical RXC Spyder; “It was a kerb – the splitter got ripped and I didn’t want to carry on and get further damage” explained the former ETCC exponent.

The gap between Tomlinson and Kapadia at the front was barely more than a second, and the pair exchanged places several times until the Radical established a semblance of a lead towards the half-way point of the one-hour race. Meanwhile Dolby had succumbed to the advances of Sir Chris Hoy in the Algarve Pro Racing Ginetta G57, who was posting some respectable lap times and taking no prisoners. The luckless Colin White had by now retired his Ginetta G57 with alternator failure.

The leaders pitted together on lap 17 – by this time Kapadia was over six seconds ahead, leaving Hoy to inherit the lead , but he too came in for his mandatory stop, and once the timing screens had settled, Paul White was at the front in the second Simpson-run G57, displaying signs of bodywork damage caused by the same kerbs that put paid to Hanson’s race.

White was the last to pit, and as the race entered the final quarter of an hour, Tomlinson was back in charge, with half a minute leeway over Michael Munneman, who had relieved Hoy in the Algarve Ginetta, followed by Paul Spencer (who had taken over the SR8 from Kapadia). 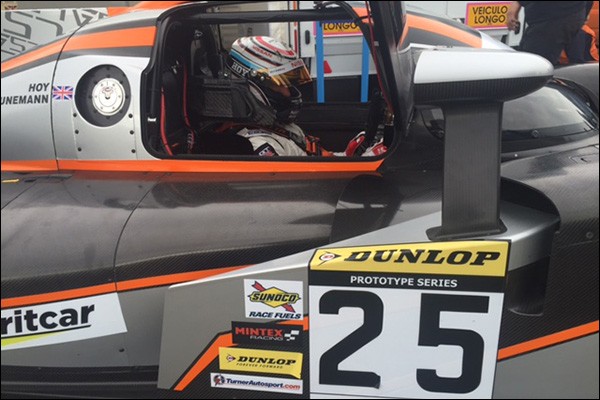 Dolby and White, though, were hunting as a pair, and dispensed with Spencer to resume their private battle, which then tailed off somewhat, with Dolby falling back a little to leave the Ginettas to a 1-2-3 overall finish, with Tomlinson backing-off drastically on his final lap to finish just four seconds ahead of Munneman, with Paul White nearly a minute further down the road.

Britcar’s new Prototype Series has attracted a lot of interest from the competitors and public alike – the opening half hour of Race 2had some seriously good position changes, and five different cars led the race. With support pledged for the future, and a grid of superb-looking prototype machinery,this augurs well for a sensational series.