A chaotic start saw one of the LMP3 runners spin as the field came onto the Wing straight, and just as the lights went out, Leo Roussel’s Pegasus Racing Morgan speared sideways and hit the wall at the WEC pits, suffering front-end damage but managing to recover to the ELMS pits.

Up front, polesitter Pierre Thiriet went straight on at the first corner, allowing Andreas Wirth to initially hold the lead as the first lap unfolded. But he hadn’t reckoned on G-Drive’s Harry Tincknell getting a better exit out of the Complex and overhauling the SMP BR01 on the Wellington Straight, tucking into the lead under braking for the next corner.

Tincknell had a 3.6-second lead after four laps, with Wirth under pressure for second from Paul Loup-Chatin in the Panis-Barthez Ligier. A look into Copse on lap four didn’t come off, while back down the field things were getting very crowded indeed, with the #33 Eurasia Oreca of Tristan Gommendy demolishing a braking marker as he was forced wide in the Complex.

Chatin kept attacking Wirth and was forced out on to the grass on the approach to Stowe on lap six. He got through at Copse next time around, however, and Wirth’s team-mate Sean Gelael followed him through on the run-up to Stowe in the other SMP BR01. Another place was then lost through Club to Bjorn Wirdheim in the Krohn Ligier, dropping Wirth to fifth overall.

Focus now turned to Wirdheim’s pursuit of Gelael, which very nearly ended badly at Chapel on lap eight. The Swede kept in touch, however, but up front Tincknell had stretched out an 11-second lead. Gommendy was the next man to overhaul Wirth, getting the in-the-wars Eurasia car into fifth on lap nine.

The passes continued to come thick and fast, with Wirdheim selling Gelael a dummy into Vale on the same lap to move the Krohn car into third. Recovering poleman Thiriet, meanwhile, now had fifth-place Galeal in his sights, but he overdid it, slid into the gravel and hit the barrier with the #46 car at Luffield. Gommendy at the same time pulled the Eurasia car to a stop at the exit of the same corner with either damage or a mechanical problem. That left SMPs Gelael and Wirth in fifth and sixth ahead of Memo Rojas in the Greaves Ligier in sixth

A full-course yellow was then thrown to recover the beached TDS and Eurasia cars from Luffield. Once everyone got back up to speed, Tincknell sat 25 seconds up the road from Chatin, having been as much as 40 ahead before the incident. Chatin began clawing back time as the Jota-run G-Drive machine encountered traffic.

At 45 minutes in, Wirdheim brought the Krohn Ligier in for a slightly early stop, staying on board. Leader Tincknell as well as Chatin, Greaves’ Rojas and and IDEC Sport’s Dimitri Enjalbert all pitted and stayed on board their respective mounts as the first hour drew to a close.

The 2016 ELMS season for LMP3 started in chaotic fashion. The pole-sitting #6 360 Ligier of Terrence Woodward held the lead, but behind the #15 RLR and #19 Duqueine Engineering Ligiers both spun at the start line. The #19 of David Hallyday went into the pit wall, but didn’t make contact, the #19 of Os Yusuf spun round on the outside. Both were lucky not to be collected by the field scrambling to get round them and continued at the back of the field.

During the opening lap though, Alex Brundle in the #2 United Autosport Ligier was on a charge and took the lead. The #6 slipped to sixth in the melee. Behind Brundle, the #18 M. Racing Ligier of Thomas Laurent had climbed to second, with the sister United Ligier of Matt Bell moving into the top three.

After three laps, Alex Brundle held a 1.4 second lead over the huge field of LMP3 runners. In an attempt to climb up the order, David Hallyday would receive a penalty for hitting the #55 AF Corse GTE Ferrari of Duncan Cameron. The Frenchman threw the #19 Ligier up the inside of the 458 and spinning him round after making contact with the front-right, spinning him round.

With 15 minutes gone in the first hour, Brundle continued to pull away from the field, and extended his lead to over six seconds ahead of Laurent’s M.Racing JSP3. Laurent’s time in second place wouldn’t last much longer though, as minutes later Matt Bell blew by the Frenchman to make it a United Autosports 1-2 at the head of the field. 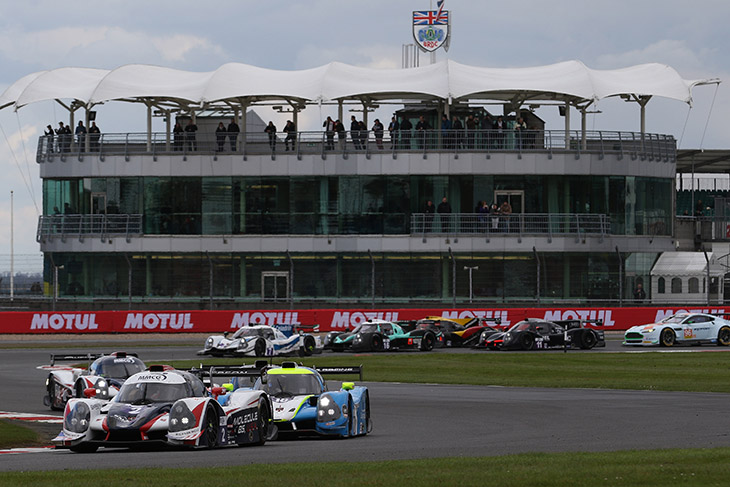 After the full-course yellow for the TDS incident, Brundle’s lead over Bell had shrunk to just over four seconds, with Laurent in third sipping away. With a quarter of an hour to go, the fourth-place car, the #7 Villorba Corse Ligier, was spotted limping having lost its rear-left wheel at Copse. Giorgio Sernagiotto was driving, and later went off at the end of the lap, tumbling down the order at Vale. The Italian got bogged down on the grass, ending a very disappointing first race for the team, which had looked good for a top-five finish on pace.

The Ligier stopping brought out the second full-course yellow. As the hour came to a close, the By Speed Factory Ligier would also hit trouble, stopping at Turn 6 just as the first pitstop cycle started. The top five after one hour was as follows: 2, 3, 11, 17, 13.

GTE had an altogether more straightforward start than LMP2, with Stuart Hall in the polesitting Rofgo Aston managing to put some wayward prototypes between himself and Alex MacDowall in the second-place Beechdean Aston and Rob Smith in the JMW Ferrari.

There was drama for Duncan Cameron in the #55 AF Corse Ferrari, who was tapped into a spin by one of the Duqeuine LMP3s (driven by David Hallyday, who was subsequently penalised).

By the time the full-course yellow was thrown for the two LMP2 retirements, the two Astons were running first and second in class, five seconds ahead of MacDowall in the #99, who was himself nearly 10 seconds up on Smith in the JMW Ferrari, Ried in the #88 Porsche and Pier Guidi in the AT Ferrari in fourth, fifth and sixth. AT elected to make an early pitstop to put Alex Talkanitsa Jr in and take starting driver Pier Guidi out.

Cameron suffered more contact towards the end of the hour, coming together with Piergiuseppe Perazzini’s sister AF Corse car.