Reid in, then out!

After his last-minute addition to Murphy Prototypes’ LMP3 Ginetta driving squad last night, Anthony Reid will not now be racing for the Irish squad in Saturday afternoon’s event.

A team source said that the organisers have since deemed him ineligible to take part. Therefore, the team will revert to Plan A and Doug Peterson, who withdrew yesterday after feeling unwell and uncomfortable in the car ,will drive a stint in the race provided he’s fit enough to do so.

Elsewhere, we caught up with Alex Brundle just before his strong qualifying run for United Autosports. As an experienced LMP2 driver, he’s well-placed to judge LMP3’s suitability as a stepping stone to the faster prototype class. 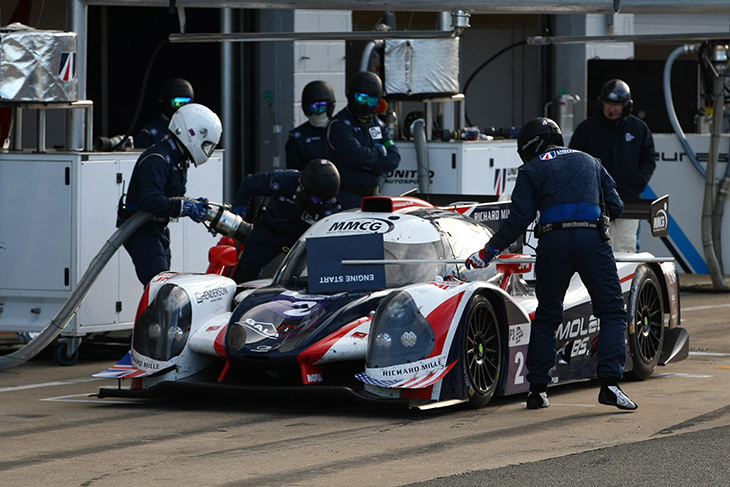 “It feels very like a P2,” he told us. “You’re just missing a little bit of top-end power and top-end downforce, which is exactly what a stepping stone should be, really. The lesser downforce actually makes them that little bit tricker to drive on the limit than a P2, but overall it’s very good for the gentleman drivers.

“It’s all very sensible for this level of racing, you don’t have to worry about managing brakes or conserving tyres. It’s just a good, reliable car you can get in and do laps. Ours were delivered early, which is almost unheard of in motorsport!”

Quadruple amputee driver Frederic Sausset wasn’t in the SRT41 garage when we popped in, but his co-driver, Le Mans veteran Christophe Tinseau was happy to confirm that progress so far has been good, despite the inclement weather in free practice.

“Fred is happy with the controls, we’re happy with the pace and the ACO is happy from the safety side,” he said. “The focus now is to get as much track time as possible in the race.”