No competitive lap times were set in Free Practice 3, after heavy snowfall caused the session to be red-flagged mi-way through, the conditions deemed too treacherous to drive in.

A few runners braved the early running, with Anthony Davidson in the #5 Toyota Gazoo Racing TS050 aquaplaning backwards off the circuit at Chapel in the opening five minutes. The session was red-flagged while he was extracted from the gravel trap, before going briefly green once again.

But the snowfall continued and got heavier after Davidson returned to the pits, and the organisers had to bring out the red flags again. 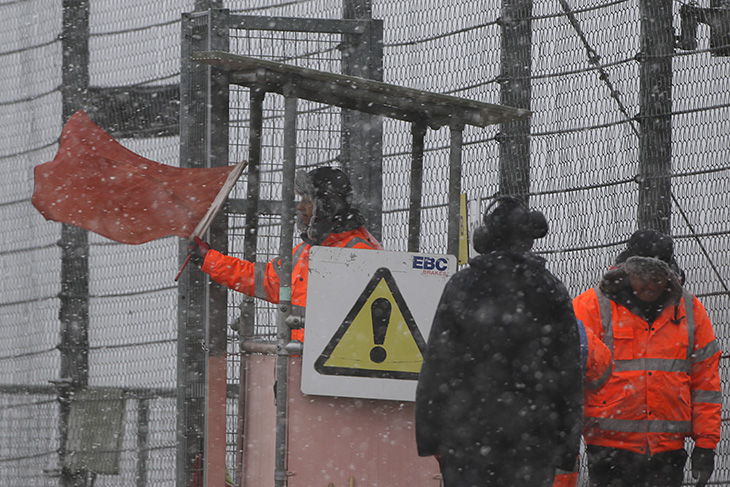 Loic Duval, last of the serious runners in the #8 Audi, radio’d in to the Audi pit crew to ask them to take a picture of the conditions.

“My family will never believe me,” he said.

On his lap the Audi driver noted that he had passed a confused duck standing on the straight, clearly believing standing water to be a pond.

Also in pit lane, Rebellion Racing driver Dominik Kraihamer was seen in race suit and helmet, with two brooms, in a Klammer-esque pose, amid the falling snow. (with thanks to Phil Beckett for this shot!)

Under the red flag, Yannick Dalmas was asked to lap the circuit to assess conditions, his feedback immediately leading to the session being curtailed.

The remainder of the session was then cancelled with around 30 minutes remaining.

The weather has started to improve, with snow ceasing by 10am. The next notable track action is the ELMS Qualifying at 10:50.